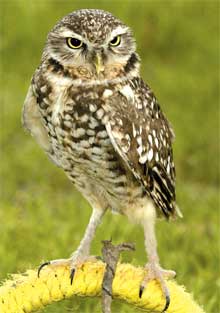 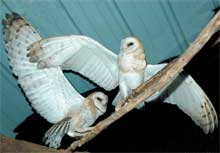 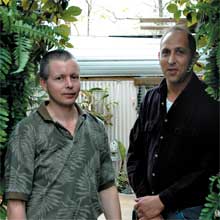 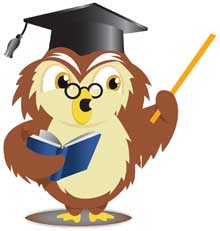 If it wasn’t for a mourning dove, I’d never have met the owls. And if it wasn’t for two devoted Ocala animal lovers, the owls wouldn’t be there either. But I’m getting ahead of myself.

Last fall on an early morning walk, I discovered an injured mourning dove. Unable to fly because of a damaged wing, she was trying desperately to hide in the grass. I gently caught and carried her home. But who do you contact in such a situation?

After many phone calls, I finally reached a vet’s office that referred me to a local wildlife rescue and rehabilitation organization, OWLS OCALA, Inc., also known as Ocala Wildlife Sanctuary. They returned my call immediately and agreed to take the injured dove to try to save her. (And no, they assured me, she wouldn’t become a snack for owls!)

That was my introduction to Keith Belisle and Kenneth Lane, long-time Ocala residents and the founders of a unique organization dedicated to rescuing, rehabilitating, and providing for injured raptors, primarily owls, and educating the public on these remarkable creatures.

Owls ocala actually got its start in 1990 when Belisle and Lane rescued a juvenile Barred Owl that was attacked by crows. The owl’s wing was damaged to the point that it required amputation.

“We tried for several days to get assistance for him with no luck,” Belisle recalls. “We finally found an agency that was willing to work with us, and that made us realize there was a desperate need to help wildlife that need permanent homes.”

It is testament to Belisle’s concern and skill with injured wildlife that 16-year-old “Fuzzy,” that first rescued owl, is still alive and well, peacefully living out his life at OWLS OCALA.

Belisle and Lane began making themselves available 24 hours a day volunteering for wildlife rescues and working with local veterinarians to offer medical expertise on injured birds and providing housing for those needing permanent homes.

Belisle holds wildlife and the environment in the highest esteem, a trait he believes came directly from his Native American heritage. He was born and raised in Ocala, but his grandmother was a full-blooded Sault Ste. Marie Chippewa Indian. He has long felt a special connection with owls, a frequently maligned and misunderstood bird, and has demonstrated an innate ability to work with them.

“I believe I have a God-given gift,” Belisle says humbly. “If harm is caused by humans, I believe humans should take the responsibility to care for the animals. If they can have a happy life — even if it’s not in the wild — then I think we have to do what we can to save them. I know this is my calling, to help these animals and to make a difference.”

Tragically, many of the rescues that OWLS OCALA is called on result from human cruelty or carelessness. Among the permanent residents at the sanctuary is a large goose that once served as a companion to a blind horse until someone snuck into their pasture and maliciously hacked off a large portion of her beak. There’s also a friendly female duck that survived a vicious attempt to skin her alive, and whose mate remained stoically at her side when Belisle came to rescue her. He also relates the heart-wrenching tale of a hawk that had been shot
twice with blow darts, and died as they were removed.

“What people do to animals is the most frustrating thing we encounter,” Belisle admits. “We feel strongly that the laws need to be strengthened to protect animals. It seems like only the big cruelty cases make the news and smaller cases are just brushed under the rug.”

A tour of the OWLS OCALA facility reveals carefully-laid-out flight cages, pens, and habitats, all built with the birds’ best interests in mind.

“We try to mimic their natural habitat as much as possible,” Belisle remarks. “We use natural perches and keep the environment tranquil.”

Indeed, a peaceful atmosphere permeates the facility. Waterfalls and ponds provide a gentle background chorus of trickling water. Of course, some of the birds contribute their own noise.

Among these is “Kenny” the crow, rescued after he fell out of the nest as a juvenile. Surprisingly, Kenny has learned to talk and his vocabulary includes “Hi,” “I love you,” and “Good morning,” as well as the names of birds caged nearby. He’s even begun swapping sounds and words with the parrot in a neighboring cage that was rescued after his owners clipped his wings too short and then let him loose.

A typical day at owls ocala starts before dawn when Belisle and Lane begin feeding the birds and cleaning cages. Daily duties also include medical attention to animals as needed, repairs to cages, and rescue trips. When a call comes in, injured birds are brought back to the sanctuary where the animal is stabilized and an evaluation is done. If veterinary care is necessary, the bird is promptly taken to one of the local vets that work
with OWLS OCALA.

“Keith intuitively knows when there’s something wrong and seeks appropriate care and is willing to do whatever needs to be done,” says Kelly Culbertson, DVM, of Town & Country Animal Hospital. “Keith’s filling a niche because there really isn’t anyone out there doing this.”

The rehab process depends on the extent and type of the bird’s injury. A stunned bird that flew into a window or was glanced by a vehicle may only need to be kept for a few days. One with a broken wing, however, faces a more lengthy recovery.

During that time, the owls are fed live food so their hunting instincts stay strong. If for some reason that’s not possible because of their particular injury, Belisle and Lane teach them to hunt live prey again.

“We make sure they can successfully hunt and capture prey three consecutive times in our aviary before they can be released back into the wild,” notes Belisle, who adds that returning an animal to the wild is hugely rewarding. “We try to release a bird where it was found unless that’s not a good environment. They’re most familiar with the area where they came from and they may still have a mate out there.”

Ironically, most rehab/rescue facilities are required by the Federal
government to euthanize birds once they have more than two per species, Belisle explained.

“Carmen Simonton and Reese Collins of the U.S. Game and Migratory Birds division have worked extensively so we didn’t have to do this and to allow our organization to have the number of birds we have,” he adds. “That puts us in the category as one of the largest birds of prey facilities in the country.”

Currently, OWLS OCALA is home to about 60 birds, mostly owls, but there are also a handful of songbirds, ducks, and other feathered residents. Some of the facility’s permanent birds are used for educational opportunities, notes Belisle, who routinely makes presentations for 4-H clubs and local schools.

“Owls are becoming more visible, not because populations are increasing but because their habitat is being destroyed,” he points out. “Doing educational programs is so rewarding. I enjoy the opportunity to share our experiences with the community and to educate people, especially the younger generation. We do a lot for the Department of Juvenile Justice out at the Eckerd Camp. They have a fantastic program that is environmentally-based and words can’t describe the feeling of seeing youth who are in trouble get positive reactions from the animals.”

OWLS OCALA is open to the public by appointment only. There is no charge for tours or educational visits, but donations are greatly appreciated and every dime goes directly to caring for the birds. Volunteer positions are available for those wishing to help with gardening, maintenance, and repairs. You can also sponsor a bird through donation.

Oh, yes, the little mourning dove that first introduced me to the owls did survive. The damage to her wing was such that she couldn’t be released, but she is living contentedly, safe in her new home.

An Owl Ed-hoot-cation
Ten things you might not know about these misunderstood birds.

1. Owls hunt by both sight and sound. An owl can hear a mouse moving under a foot or more of snow!

2. It’s a myth that owls can turn their heads 360 degrees; the most is about 280 degrees, depending on the type of owl.

3. Owls will at times lie flat on the ground, face down, with wings outspread. If you spot an owl in this surprising position, wait a short while before calling a rescue facility because it’s probably just — get this — sunbathing!

5. The talons of a Great Horned Owl exert over 450 pounds per square inch.

6. Many owls don’t mature until age 5, when they start nest-making and egg-laying.

7. Out of every set of babies hatched by Barred Owls and Great Horned Owls, only one typically survives to one year of age and of those, only 50 percent survive to maturity.

8. Burrowing Owls hatch their broods in underground dens, which they line with cow dung, horse manure, grass, and feathers.

10. Raptors, including owls, have hollow bones.