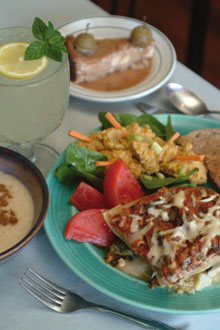 Now that it is officially summertime, why not leave the heat of pavement-encircled city restaurants and head out to the surrounding areas for a meal? Head to where the air is fresh, the vegetables are freshly picked from nearby farms, and fresh herbs are a few steps outside the kitchen door. Head to the Kismet Café in the historic town of McIntosh where the food is, well, freshly homemade.

You would expect that a writer could think of another descriptive word, but the overwhelming impression that I took away from my dining experience at the Kismet Café was that of ‘right out of the garden,’ ‘recently harvested,’ freshness. Co-owner and chef Brenda Flowers says that is exactly the ideal she and partner, Norman McDougal, set out to achieve. In fact, The Kismet Garden restaurant that the couple previously operated in Micanopy was centered around a garden so that the customers could commune with the natural state of the food they were consuming.

What is equally as attractive about the Kismet Café as the food is the atmosphere of the town and the building it is in. Having grown up in Massachusetts where many great restaurants are located seaside, harborside, or in historical buildings, I have grown weary of the sterility of main thoroughfare and strip mall dining. To reach the Kismet Café, you drive down a residential road of Victorian homes, old-fashioned gardens, and time-weathered oaks.

Chris Rath, a McIntosh resident whose family has been in the town for generations, recounted the history of the building in which the Kismet Café is located. Her great uncle, J.K. Christian, was one of the early pioneers of McIntosh, and he operated the Christian Mercantile out of the predecessor of the current building. That original building faced the Depot (one of the many historic buildings in the town that has been restored), and goods were unloaded from the trains and transported the short distance to the shelves of the store. Rath says, “the store sold everything from safety pins to coffins.” Local oral history has it that the original building burned in the early 20th century and was replaced by the current building. It remained in the Christian family for over 100 years, and it continued to house a general store even longer.

Whether intentionally or not, Flowers and McDougal have carried over the mercantile atmosphere with their table settings of mismatched tablecloths, dishes, and votives. Anyone who watches HGTV knows that this casual look of mismatched items is also very ‘in.’

The café also displays and offers for sale a selection of arts and crafts made by local artists. “I have always been more or less a working artist, mainly a glassblower,” says Flowers, “and I did the arts and crafts circuit for years.” These items for sale are a way for Flowers to help out other local artists and decorate the café at the same time.

A wall of books dominates one side of the dining area. Flowers and McDougal hope people will come in and browse through the volumes while they dine. Wide-planked floors, a bead board ceiling, and exposed ceiling pipes add to the atmosphere of the café.

My husband and I were impressed with the long list of specials offered on the night that we dined at the Kismet Café, as the regular menu by itself offers many tempting entrees. McDougal explained that Flowers gets bored cooking the same fare, so she tends to offer a lot of nightly specials. Flowers confirmed this when she left the kitchen for a few minutes to speak with us.

“I’ve always cared about being self-expressive in some way, and right now it’s with food,” she says.

We began our meal with a bowl of four-onion soup that was cream based instead of the stock-based onion soup. However, it was not heavy, but rather it was delicate and sweet with a nice, but not overpowering, onion flavor.

McDougal served us two plates with an assortment of entrees that my husband and I shared between us. The cassoulet off the specials menu combined lamb, pork, chicken, sausage, and white beans in a thin tomato gravy. The tomato flavor was so (oops, almost used the ‘f’ word again) ‘right from the garden,’ and it was delicious. It did seem a bit too heavy for a warm, summer’s evening, but I look forward to ordering it again on a crisp, autumn night.

Another special — roasted summer veggie lasagne — was a testimony to Flowers’ use of local, in-season, vegetables. The predominant vegetable was eggplant, and the sauce had good flavor that did not overpower the vegetables.

The chicken pot pie was from the regular menu, and it was just like grandmother used to make — flaky crust, chunks of chicken, and vegetables in a light and delicately seasoned gravy. The menu described it as “prepared with extra love” and it tasted that way.

The other entrée that we tasted off the regular menu was chicken and yellow rice, prepared with tomatoes, rosemary, thyme, ricotta, olives and roasted garlic. It was the only dish we tried that I felt needed more flavoring, but the olives were a good taste addition to the usual recipe.

All the main dishes on the regular menu and most of the specials were $8.99, with the exception of stuffed flank steak with greens and chorizos and ginger-lime salmon that were $12.99. I think those are very reasonable prices for such good quality food.

The Kismet Café does not have a liquor license so it is strictly BYOB. The corkage fee is $3. The Café’s list of beverages does include hand-squeezed lemonade and fresh ginger-honey lemonade, cola, sweet or natural tea, and coffee. Smoothies and frappuchino are sometimes available.

Dessert was scrumptious and very southern! The peach pie topped with whipped cream was right out of the oven. The fruit was sweet and seasoned to perfection, and the crust was flaky and light. Here was another example of Flowers using a seasonal crop.

The chocolate pecan pie was served warm, too, the first time I ever had it at anything but room temperature. It was fantastic, and my husband and I played dueling forks as we each tried to get more than our half of the slice which, thankfully, was very large.

During the long evenings of summer, there should be time for a brisk walk around the neighborhood of beautifully restored Victorian houses before you head home. Or, on Saturday nights, you might want to head back in to the Café to listen to the live, acoustic music (call for time and performer). Then you can drive home, pleasantly stuffed from all that fresh food.

Jean Crossman Gilman is a freelance writer, photographer, and artist from northwest Marion County. She received her BA in English Literature from UNC-Chapel Hill where she also completed the school’s prestigious creative writing program. She can be reached at jean@ocalastyle.com