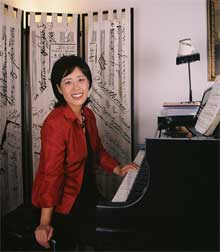 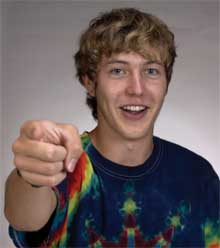 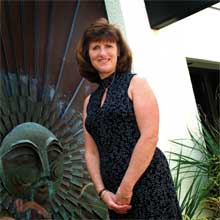 Last year was another successful one for the arts in Marion County. As the calendar months, (and also the weather) begin to usher in fall, we look forward to what our many talented, dedicated arts groups have to offer.

This year, we welcome the Square Theatre to the growing list of cultural organizations that grace the many stages throughout Marion County. This newly formed group has a busy season planned with six mainstage performances including Driving Miss Daisy and Steel Magnolias. So, take a look at what’s coming ahead on our area’s 2005-2006 cultural calendar. Pick your favorites. Buy your ticket. You’ll be glad you did.

For more than two decades, Cherie Beers had to approach most matters with the arms-length objectivity of a journalist. But she is embracing her new position as the first paid executive director of Marion Cultural Alliance with all-out enthusiasm.

“I love the reach and interaction of the MCA,” says Beers. “The relationship with the community is wonderful and invigorating. I’m having a great time.”

After 23 years with the Star Banner, the last five as executive editor, Beers was ready for a change of direction.

“It was time to do something different with my life and my career,” explains Beers, 47. “I have been interested in MCA from the moment it came into being. The message was so positive, the need was so great, and the methodology was so sound.”

As a journalist who greatly admired the arts, Beers witnessed the impact of MCA’s Horse Fever campaign.

“That project did such wonderful things for the community. It made Ocala feel so good about itself and gave us such pride,” she says. “It allowed us to showcase our equine industry and our sense of art. Those are the kinds of projects we want to continue to bring to Ocala.”

With MCA’s continuing focus on making the arts accessible to the community, Beers promises several new exhibits, involvement in the downtown renovation, and a surprise project in the fall. Pressed to disclose the surprise project, Beers reverted to her journalist persona and refused to divulge that information, saying only, “It will be wonderful and very exciting.”

For more information on the Marion Cultural Alliance, visit its website at mcaocala.com or call (352) 369-1500.

Jeremy Evan’s slogan is “Have Story, Will Tell.” And at only 17, Jeremy is one of the best storytellers around. A member of the Ocali Storytelling Guild since he was 13, Jeremy is a past winner of the Florida Storytelling Association’s “Search for Youthful Voices” and was the 2004 Grand Torchbearer of the National Youth Storytelling Olympics.
“Jeremy is an absolutely wonderful storyteller,” says Don Leonard, co-founder of the Ocali Storytelling Guild. “We are very proud to have him as a member of our group.”
The guild can also boast of Leonard being the recent recipient of the “Southeast Regional Leadership Service Award In Storytelling.” Leonard was presented with the award at the National Storytelling Conference in mid-July in Oklahoma City.
For Jeremy, storytelling just came naturally. “I always liked listening to stories,” says Jeremy, a native Floridian who lives in Weirsdale. “Then my mom taught a 4-H storytelling workshop when I was 12 that I took. That’s when I told my first story and I’ve been doing it ever since.”
In five years, Jeremy’s repertoire of stories has grown to a revolving 25-30. He specializes in short, humorous stories and says, “Folktales are my favorites.”
Jeremy has become known for enhancing his stories with a variety of sound effects. “I guess I make a lot of weird noises,” he says. “I think it brings the stories to life and everyone really gets into the stories.”
His signature and award-winning story is Wide-Mouth Frog, the tale of a journeying frog encountering different fellow animals and asking them what they like to eat. Of course, Jeremy makes the sounds of the various animals as the story progresses until… Well, we won’t give away the ending. It’s better if you let Jeremy tell the story.
For more information on the Ocali Storytelling Guild and its upcoming activities, visit freewebs.com/ocalistorytellingguild/

Founded in 1975, the Central Florida Symphony Orchestra has recently launched a new fundraising drive. Under the title of Friends of the Symphony, the drive has revitalized this important member of the Ocala cultural scene.
“The response to Friends of the Symphony has been excellent,” says Paul Sarfarazi, CFS fundraising chairman. “It has been just outstanding and reaffirms how strongly the people of this community feel about classical music.”
The Friends of the Symphony allows for several different levels of membership from $2,500 to $10,000, or more. Additionally, a Central Florida Guild has been established to oversee fundraising events and the scholarship program.
Sarfarazi says plans are to continue with the four concerts during the October through July season. The CFSO also performs free concerts in co-operation with the Marion County Public Education Foundation, sponsors the Young Artist Competition, and takes part in the Fine Arts for Ocala’s Symphony Under the Stars each year.
Several new events are also being organized. “We are looking at some entertainment, education, and social functions that will give the symphony more exposure and presence throughout the year,” he says. “For instance, we hope to have an annual Symphony Ball. Many more exciting functions are being planned. Stay tuned.”

Marie Jo sits at the piano, her fingers floating over the keys as she mysteriously conjures up the most wondrous sound. It’s a romantic piece by her favorite, Chopin, her heart and soul in each and every note.
For Marie, life and music have always been woven into one. Her mother, Sue Cho, was an opera singer in her native Korea and by five, Marie was playing the violin. By six, she had fallen in love with the piano.
After her family moved to the United States in 1980, Marie’s professional resume began. At 15, she performed Beethoven’s 2nd Piano Concerto with the Durham Symphony Orchestra. She studied music at Oberlin Conservatory in Ohio before earning a Bachelor of Music degree from the Peabody Institute of Music at Johns Hopkins University. Next was a Master’s degree in Music from Yale University.
“My parents sacrificed everything to come to this country so their children could have all the opportunities possible for a better life,” says Marie, 38, sitting in a casual, cozy music room just off the living room of her Ocala home. “My passion is music and I feel very blessed to have been able to pursue it.”
Marie’s talent matches her passion. She gained top accolades at the Chopin Kosciuzko National Competition, Elizabeth Competition, and the Westminster Piano Competition. While teaching in the Opera Department of Memphis State University, she was a pianist with the Memphis Symphony Orchestra and Memphis Opera Theatre. She has traveled throughout the United States and Asia, enthralling concert audiences.
Marriage to Dr. Paul Jo in 1991 (after an eight-month courtship) and raising a family soon took precedence over her professional career. Not surprisingly, all three Jo children — Stephen (11), Kevin (8), and Grace (6) — play the piano, as well as other instruments. The centerpiece of the music room is Marie’s seven-foot black Steinway. Joining it are a cello, two violins, a flute, and a saxophone. Sheet music is stacked atop the piano and on stands in front of the other instruments. Bright light streams in from the large window and a whimsical black-and-white cloth screen bought from Pier One, classical composer’s names scripted on it, occupies a corner.
“We enjoy playing music as a family,” says Marie, smiling. “It’s a wonderful way to be together.”
Not long after moving to Ocala in 1997, Marie began looking for opportunities to return to playing for audiences. And she wanted to find a way to share her music in an altruistic way. Thus was born the Celebrate Life Concert Series, a non-profit corporation established to promote and serve the community through the advancement of classical music while benefiting local charitable organizations.
With Marie serving as founder and president, the Celebrate Life Concert Series has hosted a special concert once a year since its 2001 inception. Organizations that have benefited include Church of Family Ministries, North Marion Outreach Ministries, Church Without Walls, The Skill Day Center, and Interfaith Emergency Services.
“The concert series has been very well received by the community,” says Marie, who is quick to point out that she is assisted by a great board of directors. “It takes many people to put these events together. All the money raised by the concerts goes directly to the organization and we give them the check that night. It’s a wonderful way to give back to the community. Classical music is a gift that should be shared with everyone.”

Appleton Museum of Art
4333 NE Silver Springs Blvd., Ocala
(352) 291-4455
Appletonmuseum.org
The Appleton Museum of Art is one of the south’s premier art repositories and education centers. Originally built to display and preserve the collection of Arthur Appleton, the museum has expanded to include traveling exhibitions, educational programs, and cultural events.