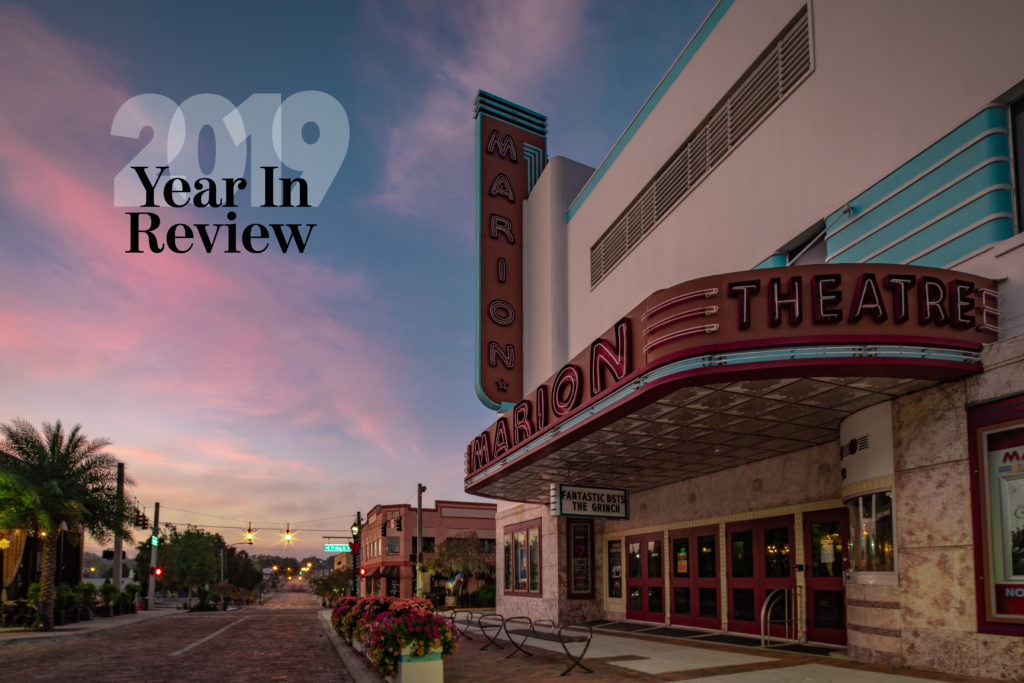 As 2019 draws to a close, we look back at a period of exciting development—the happenings, initiatives and growth that made this a year to remember. We asked a few of our community’s key players to share, in their own words, how their organizations contributed to the progress we’ve experienced and what’s up next for our community.

Continued Success for the Ocala Area! 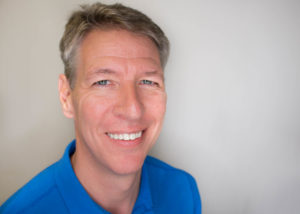 With more business development in all parts of the county, the Ocala area is poised for a big growth spurt. I am not sure how one could view 2019 as anything but an incredibly successful year for the Ocala Metro Area. The Ocala/Marion County Chamber & Economic Partnership (CEP) is excited to review how our community continues to grow, diversify and prosper.

The local economy continues to demonstrate very strong fundamentals. At press time, the local unemployment rate was a record seasonal low of 3.5 percent. But more importantly, the area recorded a job growth rate of 3.1 percent. This number is strong and higher than the state average and nearly double the national average. The Ocala Metro Area is recording job growth while at the same time seeing wages report healthy gains.

Our newest major employer opened in February, when McLane Company opened their new 400,000-square-foot distribution facility at Ocala International Commerce Park. The company now employs more than 500 people. Red Rock Developments began construction this summer on a new 620,000-square-foot “spec” building (spec indicating speculation, meaning they do not have a tenant already lined up), which is also in the commerce park along the interstate. This new facility is significant in a couple of ways. One, it will result in a $43 million investment in our community and two, it represents a major investment in the growth of Ocala as a distribution hub. That a major developer like Red Rock was willing to make this investment on spec has further enhanced the community’s reputation as a place to do business.

The industrial growth does not stop there. Cardinal LG completed and opened their new 400,000-square-foot manufacturing facility in the Meadowbrook Commerce Park. With their second Marion County facility, the company now employs more than 650 people locally. Additionally, the company has located their LG division headquarters here and announced plans to open a LG Tech Center in Ocala. Fidelity Manufacturing opened a second facility in Ocala as well this year and now employs approximately 200 people.

I am hopeful that by the end of the year we will have announced, or will be in the process of announcing, two more major additions to our community. These projects will result in a combined addition of more than 900 jobs and a capital investment in excess of $320 million. Growing and diversifying our economy is a key objective and we are excited to continue to see this momentum.

Our growth is not restricted to industrial businesses. One need only to come downtown to notice the continuing growth and changes. The new Hilton Garden Inn is drawing closer to completion, multiple new restaurants have opened, the new Osceola Trak is finally open and several residential projects will begin construction in the new year. As much as downtown has changed in the last three years, it is nothing compared to what is in store for the next three!

The CEP is very proud of the role we are able to play in each of these successes, along with dozens of additional projects around the community. We have continued to see great growth across our organization, especially with our efforts at engaging education providers and students (NEXTworks).

A truly amazing partnership is growing between Marion County Public Schools, Marion Technical College, the College of Central Florida, and the business community—especially when it comes to skills. There is an ever-growing recognition nationally that we have neglected the importance and value of skills and the tide is turning. The partnership described above is not only an example of this turn, it is quickly becoming a state and national model for how it should be done. The seven Career Choice Academies, NEXTworking, the Career Technical Education to post-secondary alignment and soft skills initiative are just a few of the many efforts to work together. I would encourage everyone, even the most ardent critic, to watch this partnership. It is catalyst that will drive our community to long-term success.

There are so many important and impactful initiatives that I wish I could highlight; however, I am going to close with a recognition that is very meaningful. The CEP was again named one of three finalists for national Chamber of the Year. This is the second time in three years the CEP earned this recognition from our peers. It is much more than accolades for our staff and leadership; this recognition highlights for the nation the incredible partnerships and can-do attitude of our community. Learn more at www.ocalacep.com 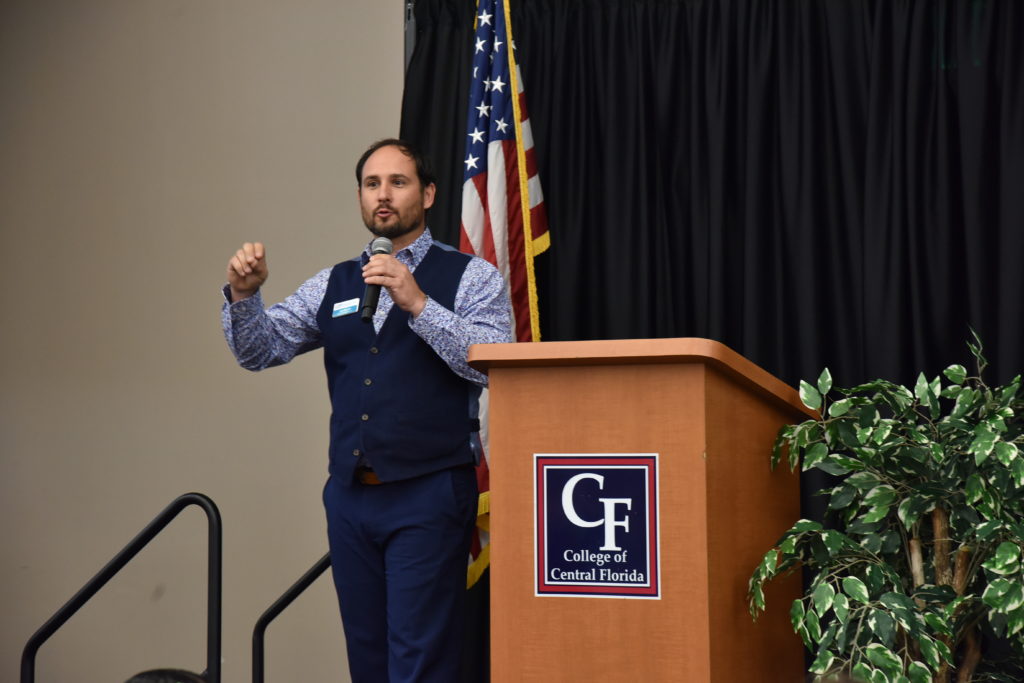 Ocala is on Trak! 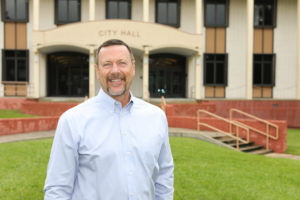 The City of Ocala train of progress is making tracks through all parts of town.

An Investment in the Future

“Someone’s sitting in the shade today because someone planted a tree a long time ago,” once said Warren Buffett, and for our citizens, that long time ago represents 21 years of thoughtful, professional planning. Our city does not put plans on a shelf. Our plans are implemented. Downtown has not seen the scale of transformation we are currently experiencing since reconstruction after the great fire in 1883. Through the Vision 2035 Plan we now have three more community redevelopment areas where more than $100 million dollars will be invested in redevelopment over the next 25 years.

In November, the city celebrated the grand opening of the Osceola Trak. This state-funded $1.2 million linear park system connects the Ocala Downtown Market in the south to the Art Park and Tuscawilla Park to the north. Wider, well-lit pedestrian, bicycle and vehicular lanes will provide safe, easy access to an ever-expanding downtown and cultural arts district. 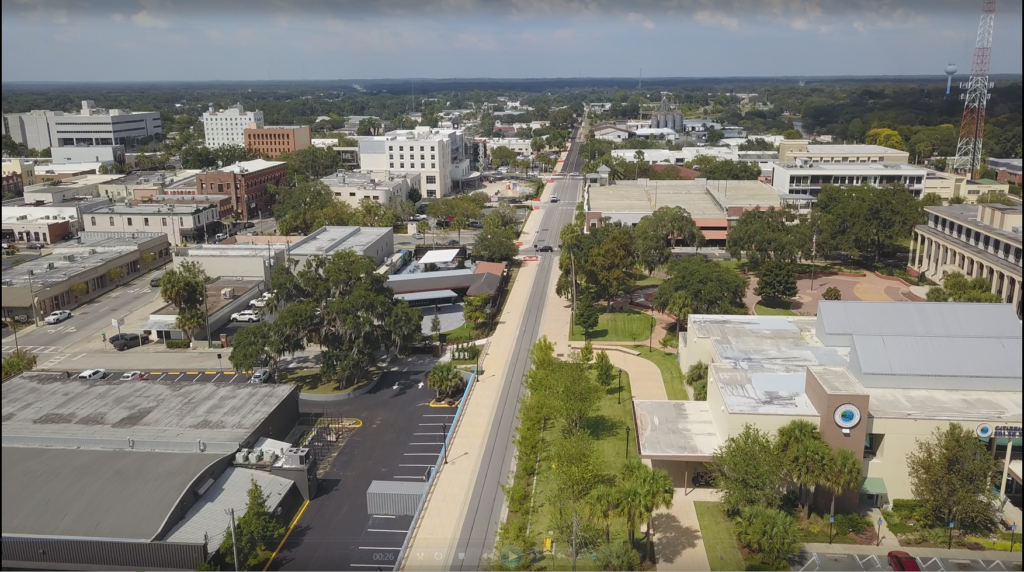 Additionally, a new $10 million, 42,000-square-foot community center and public library is currently being designed for construction on Northwest 17th Place, south of Northwest 21st Street. A nearby 65-acre, $6.5 million Wetland Groundwater Recharge Park with over 2 miles of walking trails will open in the spring of 2020. And, finally, development plans are underway to construct more than 1,000 new single-family homes and apartments for an approved redevelopment of the former Pine Oaks Golf Course.

The City of Ocala shows no signs of slowing down its momentum. There are numerous plans for improvement being implemented throughout the city, perhaps near your home or favorite local business. Twenty-eight trains cross through the city each day, and the sound of progress can be heard in those long train whistles in the distance. If you look and listen closely, you’ll see and hear the City of Ocala train moving full steam ahead, ready to take us into the future. Learn more at www.ocalafl.org 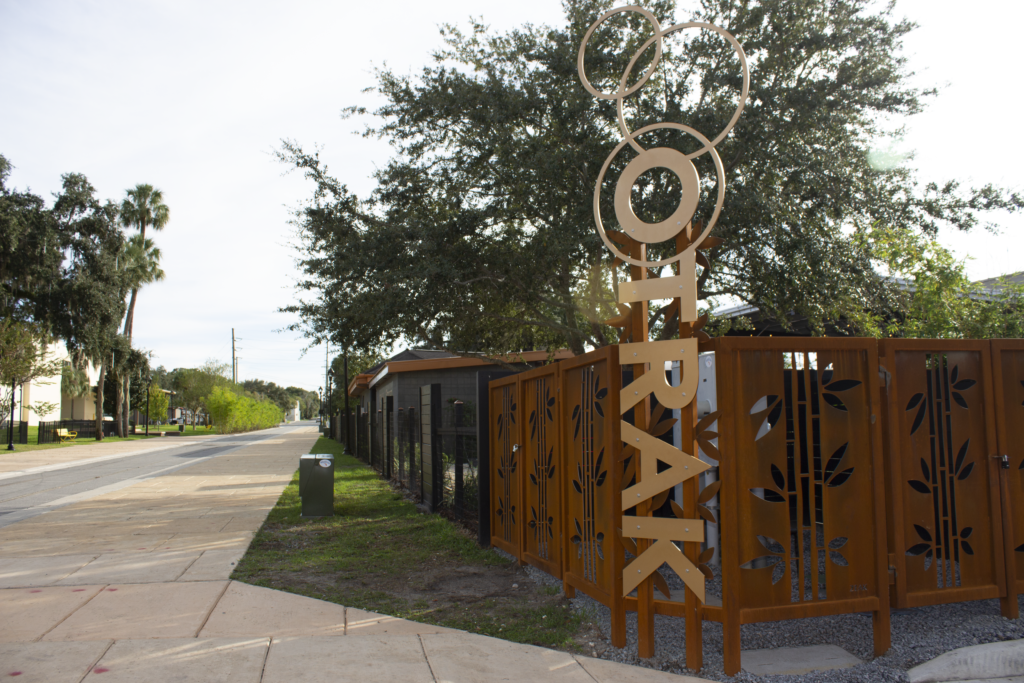 Marion County is on the Move! 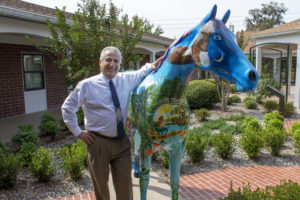 As our county turned 175 this year, we had a lot to celebrate, from new roads to new safety equipment to new jobs.

Since 2016, the Penny Sales Tax Initiative has raised more than $100 million in county revenue—monies that have and will continue to serve residents for public safety and transportation infrastructure. One example of “Your Penny at Work” is the new 7,700-square-foot Fire Station 28, adding protection to the Rolling Greens community and beyond. This $2.1-million state-of-the-art station is home to 30 personnel and aligns with the county’s commitment to public safety and strategic goal of fiscal responsibility.

Other major projects, led by the Office of the County Engineer, made possible by the sales tax, are underway. Four-lane Southwest 49th Avenue, being constructed in phases, will bring relief to State Road 200 and County Road 484 and create an essential access road to the Florida Crossroads Commerce Park. This complex will rest on 900 acres at the southernmost tip of Marion County and, once developed, is projected to bring an estimated 7,000 new job opportunities.

In addition to improved public safety and transportation, Marion County has made significant changes in waste management. Since 1980, the Baseline Landfill has served as a landing place for our waste. This facility has reached capacity and now serves as a transfer station, with collections transported to the Heart of Florida Landfill in Sumter County, where Marion County has secured 2.5-million tons of landfill space.

Parks and Recreation left an impressive mark on the community this year through successful summer programming and sports tourism. With 446 baseball and softball teams and more than 70,000 visitors to the parks on tournament days alone, these programs had a $5.3 million impact on our community.

Over the past year, the Community Services department has worked to provide and expand the supply of affordable housing, create suitable living environments and expand economic opportunities to help prevent homelessness. They rehabilitated 38 homes and constructed 25 new rental units and 35 homes, impacting hundreds of county residents.  With a new partnership between the City of Ocala and Marion County, housing issues will be addressed by a combined effort to reduce homelessness in our community.

A Standard of Excellent Customer Service

Empowering Marion for Success was created in 2017 as Marion County’s five-year strategic plan. This plan makes excellent customer service a priority with a goal of being the leader in exceptional customer service among government sectors. To ensure its success, Marion County rolled out its first Customer Service Boot Camp in which employees heard from industry leaders and influencers and where they were trained on personality types, leadership, culture and emotional intelligence.

Additionally, Marion County offers the Employee Academy and Citizens Academy—10-week courses in which participants visit various county departments to familiarize themselves with operations, get a better understanding of the services provided, and realize how each department impacts the community. These programs develop exceptional employees and bridge a positive connection between the county and its residents. The inaugural Employee Academy graduating class received honors before the county commissioners in October. 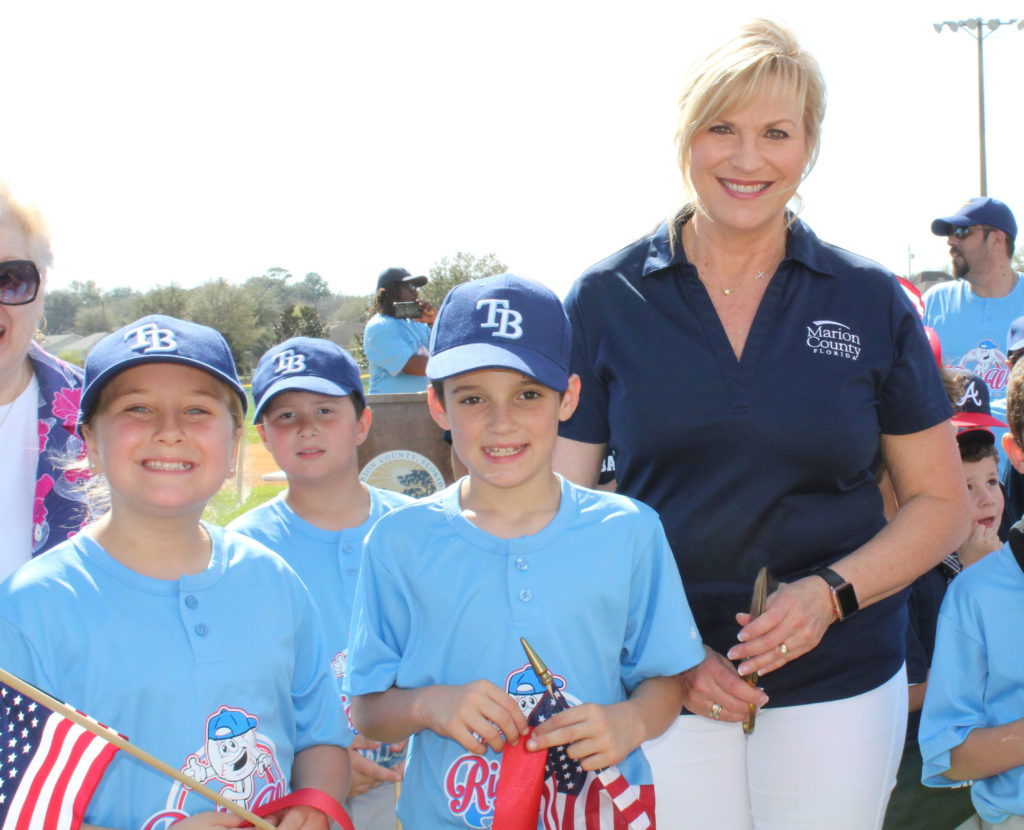 A Great Time to Work for Marion County

Just as the county aims to improve the well-being of its residents, it provides opportunities for personal growth and development for its employees, one example being the new Wellness Center. Opening soon, this newly renovated facility provides county employees complimentary access to personal and group fitness resources. A designated, fully equipped space is also available for Fire Rescue to conduct training and fitness tests.

A Leadership Development and Training initiative kick-started in the fall of 2015, with one team and 10 leaders from around the county. Today, this program engages several county leaders who meet regularly to address challenges, ideas and solutions in an effort to collaborate across departments.

If you’d like to become a part of our team and serve Marion County, be on the lookout for upcoming job fairs. Hundreds of attendees participate in on-the-spot interviews at each event and, in May, qualified candidates were discovered at the fair and matched to 16 hard-to-fill, entry-level positions.

Did you know Marion County hosted a huge event in March, celebrating its 175th anniversary? Hundreds of vendors and thousands of guests attended this event to honor our remarkable community with music, entertainment, charitable giving, education and nostalgia. On May 7th, the Board of County Commissioners commemorated the anniversary by burying a time capsule that will be opened in 25 years. A custom-designed horse statue, Marion, proudly stands inside the administration building courtyard to serve as a reminder of 175 years of great accomplishments. Learn more at www.marioncountyfl.org 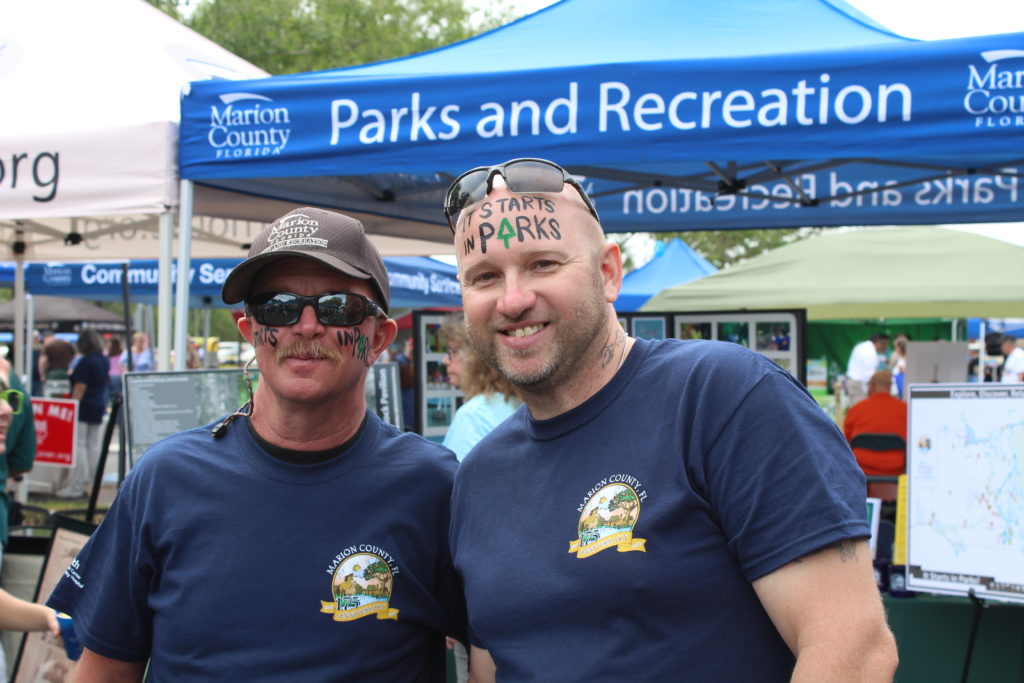 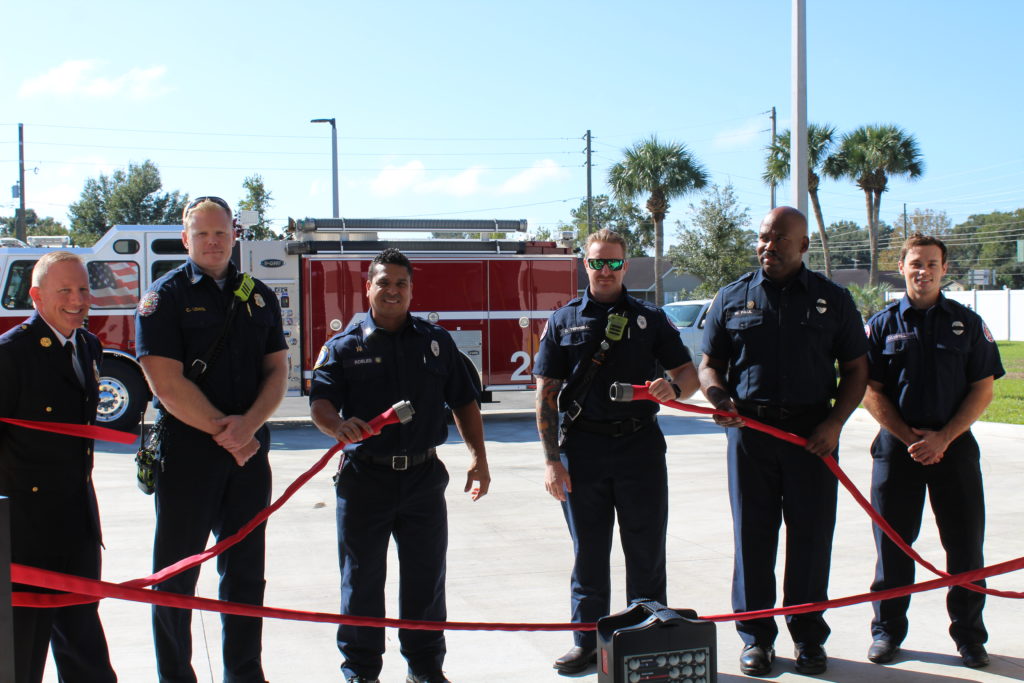