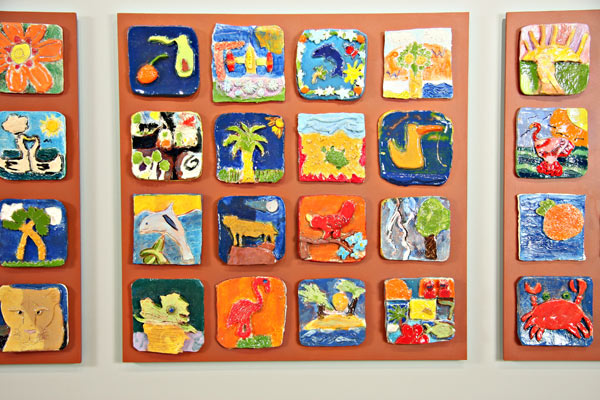 Though not as dramatic as a Law and Order episode, I find the judicial center’s atmosphere more somber than inviting. But as my heels continue clacking on the cool tile floor, I soon see splashes of color and familiar places. I stop and marvel at a gorgeous quilt displayed on the wall. And look, isn’t that a painting of The Orange Shop on SR 200?

Each piece of artwork has a story behind it, and the pieces hanging in the courthouse share personal stories related to our home, its residents and landmarks. The newest piece is a contribution from our future leaders of tomorrow: Marion County’s fourth-grade students.

Back in fall 2009, Judge of County Court R. James McCune, Jr. was approached by Marion County Administrator Lee Niblock to head a subcommittee to collect local art for the new annex of the judicial center.

During my visit, Judge McCune taps into his office computer, sifting through two years of emails. “The Courthouse Art Project – A Proposal” was sent on October 30, 2009 to initiate a plan to organize artwork for the judicial center. The goal was to gather enough artwork before the new courthouse addition was completed in January 2010. The Marion Courthouse Art Selection Subcommittee, or MaCASSo, broke off into separate sections to acquire pieces for different areas of the new annex that would reflect the community’s history, residents and culture.

“We worked together to engage different parts of Marion County’s demography and geography,” says Judge McCune.

A broad-based invitation for art was sent out with a quick response date. Soon, patrons of art and local artists got involved. With 100 responses, MaCASSo was faced with the task of reviewing artwork to feature in the courthouse.

No taxpayer money was used to obtain artwork. Instead, the Marion County Bar Association and Fine Arts For Ocala, or FAFO, financially supported the project and all pieces were gifted. Because of the abundant influx of pieces artists wanted to showcase in the center, a catalog was created for bar members to browse through and choose which pieces they would like to donate.

Gradually, the new annex was furbished with a diverse collection of artwork alluding to old Marion County, pastoral scenes of horse country and moving portraits. As the walls became less bare, however, a puzzle piece seemed to be missing. With the desire to represent all groups, the inclusion of children’s artwork was soon brought up. 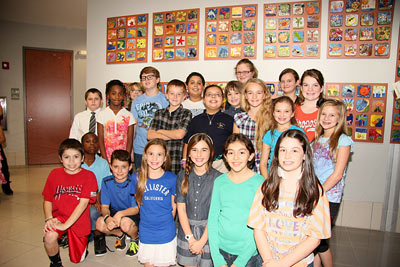 Beauty in a Scary Place

On a visit to Shands at the University of Florida at the end of 2009, child psychologist Dr. Joanne Cornell-Ohlman became inspired when she saw painted tiles as a part of Shands’ collection of artwork.

Every year, fourth-grade classes are taught about state history as a part of their curriculum. What if Marion County’s fourth-graders could contribute to the courthouse art project by painting tiles of their own while incorporating what they have learned about Florida’s history?

“What a great way to involve children,” says Dr. Cornell-Ohlman in her office on SW 27th Avenue, “especially in a place that can be so scary for them to visit.”

The cozy atmosphere of her room where she sees her patients (couch included) is worlds away from the authoritative manner of the judicial center. I myself become a little nervous inside the courthouse. Dr. Cornell-Ohlman nods in agreement.

“It’s a scary place for anybody,” she says. Involving children in the courthouse art project would show the community how much the judicial center values their artwork. Not everyone, however, was quick to give the go ahead. Judge McCune addresses the dilemma.

There was also the concern of acquiring materials. The tiles called for a substantial amount of clay and glazes, as well as kilns. Many of these resources weren’t accessible to Marion County’s art teachers. Fortunately, the Bar Association and C and R Ceramics sponsored the project. Susan Hunter of C and R Ceramics gifted all the needed materials at her cost.

After approval was finally given for children to participate in the courthouse art project, teachers and students worked over the course of two years to create a tremendous gift for our community. 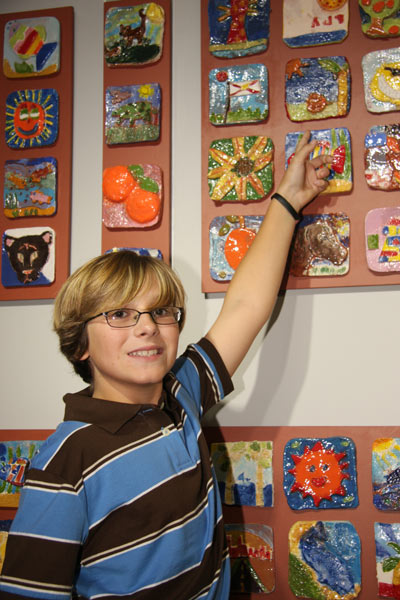 To work out the kinks before other schools hopped on board, Madison Street Academy of Visual and Performing Arts became the “test pilot” school. Art teacher Ruth Ann Dexheimer assigned each of her fourth-graders a different subject relating to what they learned in their Florida history lessons. After they sketched out their assignment, the students transferred the image to the clay, cut it out and attached it to a tile. The tiles were then fired in a kiln, painted with under-glazes and fired again.

“I think the students were excited to connect clay, drawing, social studies and Florida history all together,” says Ruth Ann. “Patience, hard work and deep learning developed an appreciation of the arts that will long be remembered in their minds and in the community.”

In fall 2010, Ruth Ann led a workshop for the elementary art teachers, who were enthusiastic to take part. Of the 28 elementary schools in Marion County 19 participated in the student tile project.

A Mosaic of Florida History

Twenty-four boards, each weighing about 20 pounds and holding 16 tiles, are hung together on a wall of the judicial center’s atrium opposite the seating area. The bright colors and animated images capture wandering eyes and give off cheer.

I stand before the students’ work with Clerk of the Circuit Court David Ellspermann, chairman of MaCASSo, and Staff Attorney Katherine “Katie” Glynn, a MaCASSo coordinator. We admire the artwork, pointing out familiar state symbols.

“Chief Osceola is here somewhere,” says Katie, scanning the tiles. There are flags with the state’s seal, manatees, horses, oranges and a reference to Fort Clinch. The students seem to have covered everything about Florida’s history, including its wildlife and agriculture. Panthers and Plant City strawberries can be spotted next to renditions of the space shuttle. Together, the 384 tiles create one big piece of artwork.

After two years in the making, the students’ art project came to fruition this year with a public ceremony on January 26, attended by the fourth-graders, their families and all of the people who collaborated to see this vision come true.

“The tiles tell stories of Florida and Marion County through the eyes of kids,” says Judge McCune. “They’ll diffuse people’s angst when they come for cases, giving them an uplifting moment and a better handle on the situation. What a beautiful gift that is!”

“It’ll become a landmark for the kids,” says Dr. Cornell-Ohlman. The tiles will definitely be a source of comfort and relieve tension for people who enter the courthouse under dire circumstances. But perhaps the judicial center will see a different kind of visitor with the induction of the students’ tiles. Maybe several years from now, a college student will be studying the court system and visit the judicial center. Maybe he’ll pause before the tiles and remember the special ceremony he went to when he was a fourth-grader.

Smiling, he’ll recall the moment he pulled his mother through the crowd, proudly pointing out his tile on the wall, the one that was a clever portrayal of Chief Osceola.