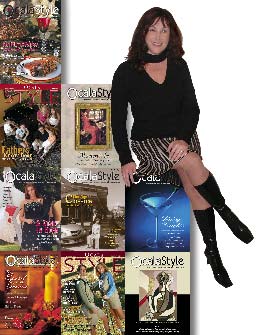 The launch of Ocala Style was probably about as inconspicuous as it gets. Kathy Johnson, publisher of the then-popular Entertainment Express, was looking for something new. Something different. Something that Ocala didn’t have.

Despite meeting resistance on many fronts for the concept of an upscale lifestyle magazine for Marion County that would showcase the very best our city has to offer — beautiful homes, culinary delights, and meticulous craftsmen — Kathy pressed on and found that a groundswell of support was rapidly coming together. In February 1999, the first issue of Ocala Style was printed and distributed to area merchants. Within weeks, only a handful of copies remained.

Five years and 49 issues later, the pattern hasn’t changed much.

My favorite part of the magazine is not really a specific story — it’s that Ocala Style is such a diverse mix of information,” Kathy states. “We offer a well-rounded, well-balanced viewpoint of what we have in our community.”

Each issue of Ocala Style covers the entire city and the surrounding area: the arts, the equestrian industry, education, and family-oriented events. The editorial choices reflect the diversity of our vast region.

“We cross over so many different cultures that live within our community,” she shares. “We open up their minds and teach them things they might not know about.”

The origins of Ocala Style go back to the late-‘80s when Kathy was producing a guide for Ticketmaster listings. That simple publication evolved into Entertainment Express, which was produced for eight years before being merged into Ocala Style.

But that’s getting too far ahead of the story.

Entertainment Express was a one-man, er, one-woman show for its first two years, with Kathy writing the text, selling the ads, keeping the books, and delivering all the copies. It was an experience that would equip her to deal with the staff decisions that would later arise.

This was essentially a period before the Internet, a time before the flood of information that pervades daily life today. Needless to say, Express did well in Ocala for a number of years.

In 1998, she started to think about another publication, one that would capture the emerging culture and sophistication of her hometown. Her idea was Ocala Style magazine.

But she immediately felt some resistance.

“Many people told me that the concept wouldn’t work,” she relates. “But a select few gave me a different perspective. I had a vision and I wanted to keep it on track.”

One of those early supporters was Bert Hauser, owner of Lighting Unlimited.

“And now,” she continues, “I get a million compliments.”

In the inaugural issue, which appeared in February 1999, Kathy was obviously very proud of the hard work and dedication it took to make the magazine happen. In the first story that greeted its readers, Kathy said: “Ocala Style is our way of celebrating and acknowledging all that is unique to our community. I invite you to browse the pages and enjoy a glimpse into the best Ocala has to offer.”

That invitation still stands five years later, and hundreds of thousands of readers have answered with their unwavering support.

“Ocala Style’s coverage is great,” says Former Ocala Mayor E.L. Foster. “I enjoy your magazine and always look forward to its next edition.”

“The pages of Ocala Style celebrate the creative talents in Ocala and nurture the public’s appetite for knowledge about premier community events,” offers Judy Worley, the Liaison Officer for the Arts with the Appleton Museum of Art. “With continued quality service to this community, Ocala Style is making a major contribution to education.”

These responses are typical and numerous, but are never overlooked by Kathy.

“The magazine exceeded even my expectations in how much people really enjoyed reading it,” she says, “but I did this at the right time. Ocala Style set the pace and gave the city the credibility it deserved.”

In the last half-decade, both Ocala and Ocala Style have grown tremendously. Ocala’s city limits expanded with explosive development on all sides: SR200, east SR40, and west Hwy 27. Over this period, Marion County added more than 16 new residents every day.

Concurrently, Ocala Style went from quarterly, to bi-monthly, then monthly — all in the span of 18 months. Now its page counts continue to swell with each successive issue. The March 2004 edition will be the largest yet.

“A progressive thinker appreciates change,” she says. “Plus, there are always great new things to write about.”

But the city needs to be constantly reminded of the reason people chose to live here in the first place. It’s why Kathy moved to Marion County more than 25 years ago.

“Ocala still has a peaceful feeling to it. I love something as simple as all the rural roads. I love the diversity that we have — towns like McIntosh and places like Ft. McCoy and Sparr. They all have their own charm.”

Kathy’s spirit of adventure is never too far away, but it also comes with a great deal of responsibility.

“It’s an unusual job,” she says, “because when you’re busy working on it, you get a little insulated. The media affects and influences people; the more people who read Ocala Style, the greater our responsibility.”

Kathy, an active churchgoer, allows her faith to guide her through what can be a very cynical industry. She routinely helps worthy charities by providing articles or ads in the magazine, especially in regards to the arts and smaller groups in need.

“Giving is not expecting anything in return. That’s part of the joy. I’ve been able to help so many people and organizations through the pages of Ocala Style.

“I’m not really interested in getting credit or being in the limelight,” she continues. “On the other hand, Ocala Style is very important to me. I take it very seriously that I do the job well and send the right message out.”

Of course, publishing a magazine is a business and this is where Kathy’s expertise has really been best realized. Despite its humble origins, Ocala Style now pours well over a $1,000,000 into the local economy each year through fundraisers and ad revenue. As a publication that currently carries no cover charge, Kathy readily admits that she has her advertisers to credit for the company’s quick success.

“I take it as the highest compliment that my advertisers believed in me and the magazine,” she says. “Their loyalty is something that I can’t even really put into words.”

She also credits her devoted staff of writers, photographers, salespeople, editors, and support personnel for the constant influx of innovative ideas and stories. After five years, Kathy feels ready for anything.

“I’m looking forward to what’s ahead. The landscape of Ocala’s going to change in many different ways, and we’ll let our readers know about the very best of what’s going to happen.”

Despite weeks that seem to blur into months and an unrelenting press schedule, Kathy remains upbeat. Her laissez-faire business approach certainly allows plenty of room for creative expression.

“It’s more than a job. Ocala Style is like this lifelong project — something valuable that you take care of and nurture.”