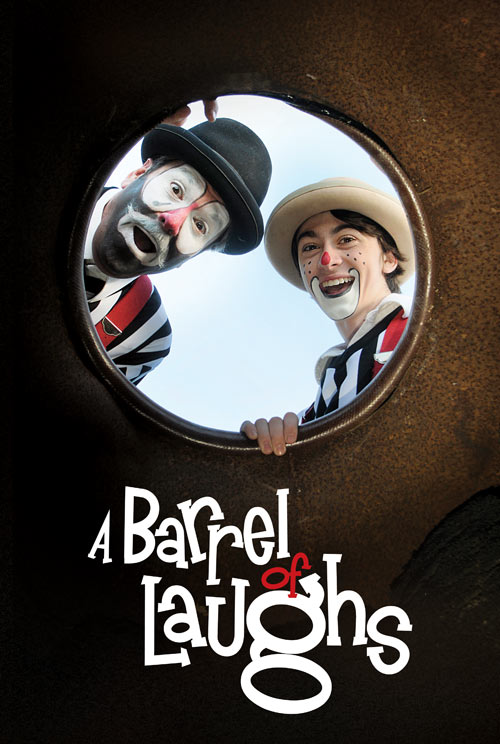 Texas native Clifton “Hollywood” Harris has been fascinated with rodeo clowns since early childhood when he met two cowboys who worked at his father’s feedlot in Waco, Texas, and who also moonlighted as bull riders and rodeo clowns. In 1970, the Harris family moved to Gainesville, Florida, where Cliff’s father continued to work in the cattle business. Once Cliff started riding bucking horses in high school rodeo, he met a stock contractor who told him he could practice riding his bucking stock for free if he’d agree to fight the man’s bulls. Adventurous teenager that he was, Cliff quickly agreed.

His father, however, didn’t want his son to be a “rodeo bum.” He didn’t know his boy was sneaking out at night to compete in local rodeos until he found riding gear hidden in Cliff’s car. He burned it all in the yard, but while the incident may have put Cliff’s rodeo dreams on hold, it never destroyed them.

“It wasn’t until after my father passed away in 1984 that I felt I could really ‘be me’ and be a rodeo clown,” Cliff  recalls. “I put everything in storage, tied a clown barrel to the back of a Firebird, packed up and moved back to Texas. I started clowning rodeos for $50 a night and worked my way up.”

Cliff met his wife, Kelly, at a rodeo—where else?—and they married in Micanopy, Florida, on December 19, 1989. Together, they lived the gypsy life for 12 years, traveling from rodeo to rodeo. Their son, Brinson James, was born in 1993, but Cliff and Kelly stayed on the road for another six years before buying their current home in the Reddick area.

“We had a blast,” Cliff grins, recalling those early days. “We lived in a trailer on the road with no address for 12 years. We had our retirement first; now I’ll have to work until I’m old.”

Although many rodeo spectators assume all rodeo clowns are also bullfighters, that’s not necessarily the case. Bullfighters—or better said, “cowboy protectors”—jump in to distract the bull when a cowboy is thrown or jumps off. A rodeo clown entertains the crowd with antics and clever banter. The clown often uses a barrel—for safety and as part of his act—hence the reason some clowns are known as “barrel men.” Clowns typically provide entertainment between bulls and events. Of course, it helps to have some savvy about bulls because a clown never knows when he’ll find himself in a tight spot. Cliff actually worked as both clown and bullfighter for a number of years, but clowning was always his priority.

“I was hired first to do comedy,” he says. “If you had good acts, you got good jobs. The acts were my forte. The bullfighting was secondary. Because I grew up in the cattle business, I knew the science of bulls and what they’ll do. When Brinson was born, I was still fighting bulls for about a year, but I was 30-something and slowing down.”

Brinson’s first appearance in a rodeo arena actually took place when Kelly was pregnant with him and helping Cliff out with a magic act. Cliff officially put their son in the act when Brinson was just two years old, carrying him into the arena in a laundry sack where the toddler popped out and swung a trick rope. At age three, Brinson sang the national anthem at a rodeo in Rome, Georgia. His career was launched.

Cliff was responsible for the nickname “Boogerhead,” using it in a silly song to make his young son laugh. The name stuck and rodeo announcers across the country have been introducing the pair as Hollywood Harris and Boogerhead ever since. 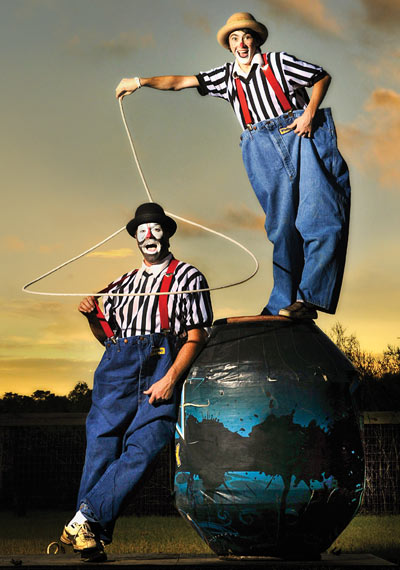 The two have performed at every major rodeo and bull riding venue in the U.S., generating laughs and bringing smiles to countless fans.

Wearing baggy pants, suspenders, white shirts, bowler hats and traditional clown “grease paint” on their faces, this father-son team never tires of hamming it up together. Their acts have evolved as Brinson has grown up, and his trick roping has become more refined. While they practice parts of their acts, both admit it’s often funnier if things “just happen.”

“We’ll practice something new, like a few dance steps, but you really can’t mess up clowning,” says Brinson. “If you mess up, it’s just funnier.”

“With my ADD, I would not be a good employee,” Cliff banters, “but I get paid to be silly and the sillier we are, the more we get paid.”

The only other character to join Hollywood Harris and Boogerhead in their acts is “Bravo,” an Australian Shepherd/Dalmatian cross that Harris adopted as a puppy at a North Carolina rodeo eight years ago. Bravo’s main gig is pretending to be a bull that chases Boogerhead around the barrels and tears off his baggy pants before dashing out of the arena. When it comes time to travel, Bravo flies as a service dog in the cabin with his human partners.

Brinson attends Trilogy School in Gainesville. A number of the students there travel frequently because they perform like Brinson or participate in high-level sports.

“This school is really flexible and very supportive of our travel,” he explains, noting that it’s similar to home schooling. “There’s lots of one-on-one and you work at your own pace. As long as the work gets done, it doesn’t matter if you travel.”

Intelligent and articulate, the 17-year-old, who typically plays the “straight man” to his father’s “funny man,” is never shy once he’s in costume.

“I think I’m better at physical stuff than talking,” he admits. “Sometimes my friends don’t believe this is what I do. The only drawback is that we’re always gone on the weekend, so I can’t do things with friends. But it’s a small price to pay.”

“He’s not a normal kid,” says mom Kelly. “When Brinson is in the arena, he’s a natural. He comes by it right.”

To his mother’s chagrin, Brinson wants to learn to fight bulls, just like his dad did years ago.

“I want to learn so if I get stuck in the arena with a bull, I won’t freeze up. I’ll know what to do,” he says. “I can watch bull fighting videos on the Internet forever and still want to do it. I guess it’s the adrenaline.”

In case you’re wondering, it’s possible to make a very good living as a rodeo clown.

“There are guys now making a good six-figure income. The top clown today recently signed a four-year, million dollar contract,” notes Cliff. “But you really have to want to not stay home, and I like to stay home.”

“Staying home” is relative. Hollywood Harris and Boogerhead still work rodeos across the country year-round—from California to New York, Minnesota to Texas—but they usually fly to these weekend jobs. If the job is in Florida or Georgia and six hours or less away, they’ll drive. It’s not uncommon for them to be gone three, even four weekends a month.

When they are home, both can often be found helping behind the counter at Coffee N Cream in Micanopy, a café Cliff and Kelly bought in 2002.

“Every successful rodeo clown needs a wife at home with a good job,” laughs Kelly.

Brinson, the self-proclaimed “malt-making king,” will also help dish up ice cream in a pinch. Located on historic Cholokka Boulevard, the cozy shop is open for breakfast and lunch seven days a week.

Although Brinson will likely attend college to learn how to improve the business side of his career with marketing, promoting and accounting, he has no intention of doing anything else for a living.

“There’s no way I can see myself not clowning. I’d rather do this job than anything,” he says. “Making people laugh is my biggest joy in life.”

Cliff Harris has come a long way since his first paying rodeo clown job in Tishomingo, Oklahoma, in 1979 when he christened himself “Hollywood Harris.” The fact that his son is an integral part of his career may be unusual, but Cliff and Brinson can’t imagine working—or living—any other way.

“We’ve been together 24/7, except for school, for Brinson’s whole life. We’re really close,” says Cliff. “He and I get to spend all this time together and get paid doing it. That’s what most fathers hope to do when they retire.”