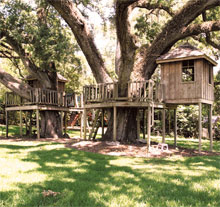 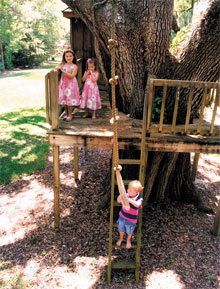 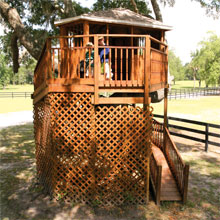 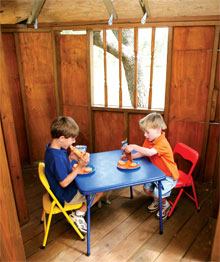 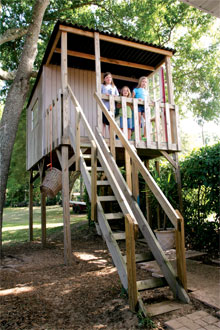 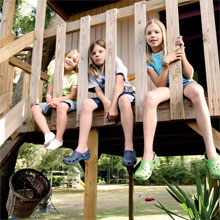 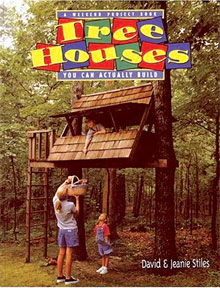 There’s something kind of magical about a tree house. Whether it’s a simple, shaded platform made of recycled two-by-fours or an elaborate creation on three levels with a working doorbell and windows, a tree house demands attention.

For some grownups, the sight of a tree house brings back fond memories of the ones they enjoyed when they were kids. For others, it’s a bittersweet reminder of the treehouse they always wanted, but never had.

Adults’ reactions may vary, but when kids see a tree house, they all have the same thought. They want to climb inside of it.

A kid’s tree house can be all of those things, and more, at different times, on different days.

We visited three local tree houses to talk to their young residents about their favorite times up high among the branches.

The first off-the-ground house we visited was in the backyard of Thad and Julie Boyd’s home in southeast Ocala. Their children — Kimber, Miranda, and Brady — have a double tree house that sits between two enormous oaks, so there’s lots of room for them and their friends.

Julie Boyd says the play structure was already there when they bought their home three years ago; it had been constructed for the first residents’ children at the time the house was built. By coincidence, Julie’s brother had been foreman on that project and had actually built the tree house himself.

Kimber and Brady’s favorite tree house activity is climbing the ladder to one of the platforms and swinging down on the strong rope suspended from the tree’s tallest branches.

“Catch me, Mom,” calls Kimber as she sways toward Julie. Mom’s right there and the two laugh as Julie helps her eldest daughter make a safe landing.

When he’s not swinging on the rope like his sister, Brady enjoys climbing up and down the ladders and dropping twigs and sticks to the ground below.

Miranda is still a little tentative about the climbing and swinging parts. She’s perfectly content with a quick visit to the platform and she’s down the ladder and off to another activity.

Julie says that because the younger children are still so small, they can only play in the tree house when she or Thad, or another adult, is with them. “As they get older, though, we’ll be able to let them use it more and more on their own.”

I like it because the animals can come up here too,” explains Adam Morrison. Adam lives on a farm in Northwest Ocala with his parents, Chris and Joanie Morrison, and his brother, Sammy.

Their dad built their tree house for them last year, using pressure-treated pine. The structure features a ramp instead of a ladder, and their three dogs, Bango, Jet, and Peppy, and their cat, Google, often join the boys when they go up to play or have a picnic.

Their mom, Joanie, explains that whenever there’s food in the tree house, there’s almost always a party of six or seven up there, counting pets and boys.

The farm’s hens nest in the lattice enclosed space underneath the playhouse. Adam and Sammy are charged with retrieving the daily eggs and taking them carefully inside to mom.

Chris Morrison says as soon as he spotted the oak tree when they bought the property a couple of years ago, he knew it would be just the spot where he could build a tree house for the boys.

“It’s a perfect tree,” he says. “The branches are spaced just right. I was able to build the house around them in a way that only one nail was actually put into the tree.”

It took several months for him to complete the project, working on weekends as time and weather permitted.

Chris says he remembers when he and his own dad built a tree house together when he was about 6, the age of his older son, Adam.

“Every boy wants a tree house,” says Chris. “It’s great to see them enjoying it so much.”

Mike and Patti Conrad’s three daughters — Ashley, Arin, and Abby — enjoy playing in their “tree fort” on stilts, which nestles beneath an oak tree at their home in southeast Ocala.

The older girls asked their dad to build it for them a couple of years ago, after they heard about a cousin’s tree house and saw one in their own neighborhood.

Mike says a friend offered to help and they decided to construct it over an extended three-day holiday weekend.

They used standard-sized lumber, “so we didn’t have to do a lot of cutting,” explains Mike. They built the basic 8 by 12 ft. house, complete with a corrugated fiberglass roof.

Little by little, Mike has made it even more homey for the girls.

When he replaced windows in the family’s house, Mike salvaged two of the old ones and installed them in the play structure. The tree fort’s bright door was recycled from a neighbor’s renovation project and painted red to coordinate with the doors of the main house.

During the holidays, the girls decorate the house with Christmas lights, and last Halloween, they turned it into a scary haunted house for friends and neighbors.

“We spend a lot of time in here,” says Ashley, as she and Arin insert favorite photos in colored frames that match the interior decor.

During last year’s spring break, the girls painted the inside of their space in their favorite shades of lavender, blue, and lime green.

“They picked out the colors they liked the best,” says their mom, Patti. “I got the paint for them, but they did all the work themselves.”

Some tree houses are actually built up in trees, the platform fitted between and among branches. Other tree houses are constructed around, adjacent to, or underneath trees on supporting stilts.

Many tree house building plans are available on the Internet. Some dads, like Chris and Mike, prefer to come up with their own ideas.

There are also many books available on the subject. One of the most popular ones, Tree Houses You Can Actually Build, by David and Jeanie Stiles, offers step-by-step plans and suggestions. Its cover promises to show “even the most inexperienced weekend carpenter how to design and build a lifetime of memories for the entire family.”

“Anyone can build a tree house,” says Chris Morrison. “You can get the kids involved in it, too. It’s a great family activity.”