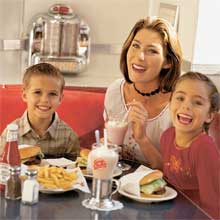 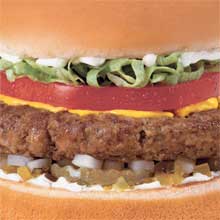 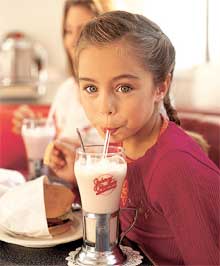 Recently, after taking in a show at the Old Mill Playhouse, my husband, Andy, and I made our way across the street to Johnny Rockets. It was late, but our friends, Patrick and Jennifer, suggested we stop in and try one of their famous milkshakes. We couldn’t resist the temptation. I think it was the nostalgic music wafting from the restaurant every time the door opened that beckoned us to come in.

We entered and found ourselves in the middle of what appeared to be an impromptu dance routine being performed by the servers. We meandered our way around the outside of the diner as the people enjoying their meals clapped and sang along to “The Twist” by Chubby Checker. The mood inside Johnny Rockets certainly was energetic, even at 9pm, when the atmosphere inside most restaurants is noticeably subdued.

Finally sitting in a roomy booth, we read through the menus and an unexpected hunger set in. Even though we had eaten dinner several hours earlier, we opted to sample some of the tempting menu items as a hearty late-night snack. Our server recommended we try the Chicken Club sandwich (which Andy did) or the Original Johnny Rockets Burger. While the hamburger looked appetizing, my stomach wasn’t as big as my eyes that night. I opted instead for the Grilled Ham and Cheese sandwich. Patrick and Jennifer kept with the original plan and chose an oversized hot fudge sundae with two spoons.

As our server was taking our order, the opening beats of “Don’t Rock the Boat” blasted over the speakers. As soon as she was done with us, she immediately joined her fellow co-workers in the dance line. We quickly learned that the miniature jukeboxes on each table controlled what was played throughout the restaurant. We also learned that the staff knows dance moves to certain songs and when a customer chooses to play one of those songs on their tabletop box, the servers have to perform their dance.

Of course as soon as we found that out, the four of us spent the rest of the night trying to figure out which songs to play to make the staff dance. And at six musical selections for a quarter, we had a lot of choosing to do! Averaging about five dances an hour, the Johnny Rockets dining experience is all about the atmosphere.

The most played song you ask? “Going to the Chapel” by The Dixie Cups.

The atmosphere in Johnny Rockets is fun. The dining room has the feel of a 1940s-era malt shop, complete with old-fashioned barstools and a very nostalgic soda fountain machine.

Located in The Villages, Johnny Rockets sees a variety of customers, including many retirees. And why not? This is the type of place they grew up going to. It’s where they took their dates and hung out after school and on weekends. Then, these people who grew up in the ’40s and ’50s went off and worked hard for 50 years. Now they get down to Florida to retire and when they walk into Johnny Rockets, they find their youth again. It must be like stepping into a time machine.

While my dining group admittedly didn’t grow up anytime near the ’50s, we can appreciate Johnny Rockets for what it is — a nostalgic restaurant with an up-beat atmosphere and good, all-American food.

And speaking of food, when our server brought our plates to the table, we had worked up quite an appetite singing along with the old songs. Andy’s sandwich was piled high with grilled, marinated chicken breast, thick bacon, fresh lettuce, tomato, and mayonnaise. The toppings were carefully stacked on a triple-decker helping of sourdough bread. Andy described his sandwich as “perfect and delicious.” My grilled ham and cheese sandwich featured thinly sliced premium ham and Swiss and Tillamook cheddar cheeses, topped with a slightly spicy mustard. The bite in the cheese was just enough to give the sandwich an appreciated zing. Andy and I shared a side of crispy, just-right onion rings.

The Johnny Rockets’ menu is extensive and includes a variety of burgers, hot dogs, sandwiches, and salads including the classics like a tuna melt, a BLT, and a chili dog. Carol Donaldson, who was sitting across from us, says the egg salad is phenomenal and she would recommend it to anyone.

And then there are the sweets. Patrick and Jennifer can attest to the caliber of the desserts at Johnny Rockets.

“Soooo good,” Jennifer says, taking a spoonful of their hot fudge treat. “I should have a sundae like this every night.”

Johnny Rockets also offers a palate-tempting selection of deluxe milk shakes and malts, made from premium, hand-dipped vanilla ice cream and real powdered malt. Flavors include Big Apple, Oreo Cookies and Cream, Chocolate Peanut Butter, Butterfinger, Strawberry-Banana, Mocha Fudge, and, of course the staple flavors of Chocolate, Strawberry, and Vanilla. Or, if an ice cream float is more your style, you can add a scoop of vanilla ice cream to your favorite soda pop.

It doesn’t matter who you are, the Johnny Rockets dining experience is for everyone, young or old.

Next time you’re exploring Lake Sumter Landing, stop in for a burger at Johnny Rockets. Mike promises a friendly hello when you walk through the door and top-notch service throughout your stay. Just don’t forget to bring your nickels for the jukebox.