To say Bobby Goldsboro is a multi-talented guy is an understatement. Four decades after he topped the charts with “Honey” and “See the Funny Little Clown,” people are still humming the refrains of many songs written and performed by this icon of the 1960s and ’70s.

In more recent years, Bobby’s “Swamp Critters” life-size puppets have drawn a crowd of little folk who are too young to appreciate the fact that it’s Bobby who wrote the script, plays all the instruments, and does all the voices.

Now Bobby’s bringing his one-man show into the world of fine art. In September Bobby showed 40 beautifully framed oil paintings at Brick City Center for the Arts. During an artist’s reception, he hobnobbed with friends and fans, his unmistakable deep, golden voice rising above the buzz of conversation. 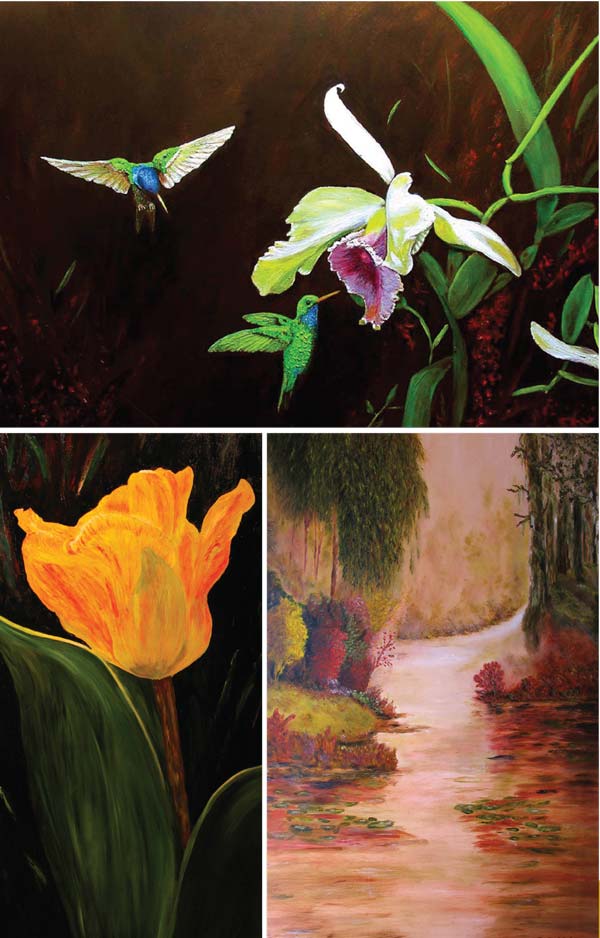 The exhibit followed close on the heels of a show in St. Augustine, where Bobby’s paintings captured the entire ground floor of a large gallery.

All this comes about just two years after he first picked up a paint brush.

“I was just blown away that I can walk in a gallery and have my paintings hanging there,” says Bobby. “I was thrilled with the comments that people made.” 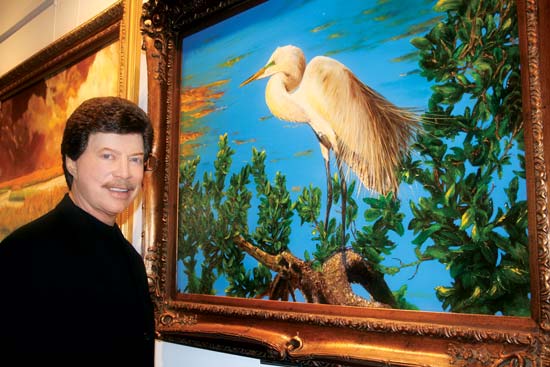 Bobby, pictured here with his End of the Day, had an interest in art as a teenager but put his passion on hold when his music career took off.

“We’ve had a tremendous reaction to his work,” Nancy says. “They remember his music, love his music, and want to see what he’s done as an artist. People who have visited the gallery have also become aware of what we’re doing to benefit the arts in our area.”

An artist in her own right, Nancy has an eye for talent.

“Some celebrities have attempted to branch out into other disciplines, but not as effectively as he has,” says Nancy. “What he has done in just a couple of years of painting is amazing.

“There are two aspects of his work that are very good, in my opinion—his composition and his use of color,” she continues. “I don’t think he would
produce the art that he does if he didn’t love the outdoors. His newest piece, Hummin’ a Tune, just jumps off the canvas. It’s very dramatic.”

A native of Marianna, west of Tallahassee in Florida’s panhandle, Bobby spent his teenage years in Dothan, Alabama. That was when the art bug first bit him.

“I sketched a little in high school, then the music career came along, so I put art on the back burner,” he recalls. “But everything happens for a reason. I’m so glad I waited.”

Just as Bobby never took a music lesson in his life, he also taught himself how to paint.

“When I got a chance to go into museums, I would paint in my head,” says Bobby. “I would learn from trial and error. I actually blew up photographs and painted on them. It was a quick way for me to learn to match up colors.” 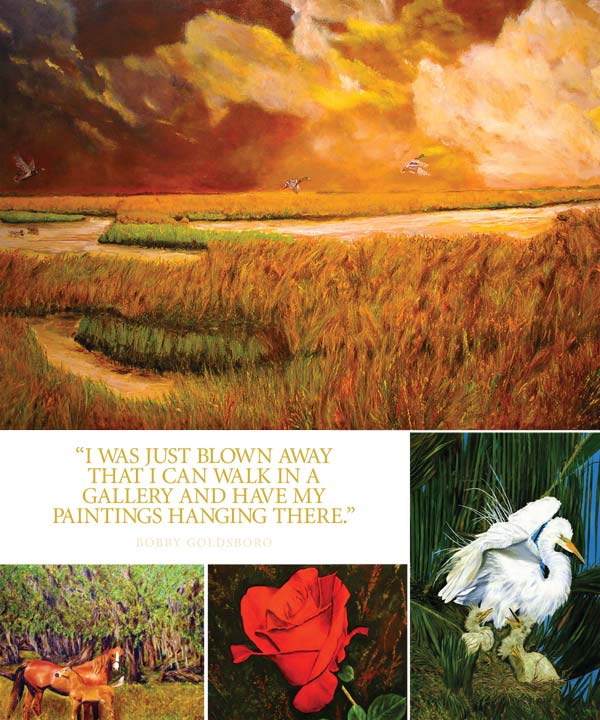 The result? A yellow butterfly that’s suspended in space, a pair of hummingbirds in mid-air vying for a sip of nectar, an egret that’s bigger than life.

Living on 123 wooded acres in the Ocala National Forest, Bobby has the very substance of his art literally in his backyard. Sometimes, he and wife Dianne go on photo excursions to other cities, usually tied to Bobby’s concert tours. Their travels to Europe have provided more fuel for his paintings.

Dianne describes her husband as a blend of comic and workaholic. He’s always laughing and joking around, but he sometimes gets too absorbed in his work, she says.

“His mind never stops,” says Dianne. “He wakes me up at four o’clock in the morning and tells me he’s figured out how to work a brush. At 67, I really think I need to stay on him a little bit more. He does get more tired than he used to.”

The best thing, says Dianne, is that the art exhibits have opened doors for them to donate to charity.

At a celebrity auction in Nashville, three of Bobby’s paintings brought in thousands of dollars for Easter Seals. The shocker was when two grown men started bidding for Swamp Critters dolls. One of them paid $5,000 for five dolls. Not to be outdone, the other man bought the box they came in for $1,000.

Sometimes, things get a little more personal. While showing Bobby’s art in St. Augustine, the Goldsboros visited children at a Boys & Girls Club of America.

“It was wonderful,” Dianne says. “We got to meet with 65 kids. They were so precious. We took a bunch of Swamp Critters dolls and dumped them on a pool table in their game room, and they got to pick which ones they wanted.

“That’s what me and Bobby decided when we got married,” Dianne continues. “Part of life is giving back. That’s why we don’t do anything at all unless we base it around a charity function.”

One of Bobby’s landscapes, The Gathering, has been selected for the cover of a new coffee table book for a local chamber of commerce.

Gateway Bank of Central Florida featured Bobby’s art during a December reception for the bank’s new facility in Ocala. The bank’s CEO, Tom Ingram, says he will keep some of the paintings on display “as long as Bobby doesn’t need them somewhere else.”

Which is alright with Ingram, since he’s become a big fan of Bobby’s artwork.

“I like the Florida landscapes with palm trees and pastures,” Ingram says. “His work is phenomenal.”