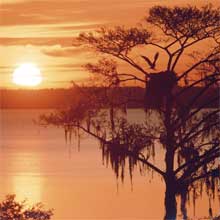 After crafting a 23-year career as a newspaper photographer, writer, and editor for The Gainesville Sun, Moran decided to refocus in 2003. And the object of that redirected commitment was to his other career as a Florida nature photographer.

Perhaps the final impetus for Moran to move deeper into his art was the publication of his Journal of Light: The Visual Diary of a Florida Nature Photographer. Released by the University of Florida Press in December 2004, the book is a 20-year collection of photos and essays by Moran that has been more than well received. At its initial book signing, Moran spent eight hours autographing 650 copies. The first-print run of 5,000 copies sold out in three months. With advanced orders already lined up, the second-print run came out in May.

“I loved my job, my past life, as a newspaper photographer and writer,” says Moran, a youthful 50 with a head full of wavy silver-gray hair. “I was fortunate to be with one newspaper for my entire career. It gave me a sense of place and a wealth of experience that I draw on every day. But it was time to move on to another phase of my life.”

This phase might be better called a mission. Moran is committed, through his pictures and his words, to sharing his vision of Florida’s natural paradise.

“I guess my job description these days is to show people the amazing, yet perhaps vanishing, nature of this state,” he says with conviction. “You can’t preach about something to people without them first experiencing it for themselves. That’s what I want to accomplish with my photos.”

These days, Moran’s time is spent exhibiting his work at weekend art shows throughout Florida, speaking at various engagements during the week, and continuing to explore nature for the next shot to add to his portfolio. Becoming a keynote speaker was a bit of a surprise for Moran.

“I had done some speaking on behalf of the newspaper during my time there,” he says. “But it was as a representative of the newspaper and I wasn’t being paid. Now I am paid and I use it as another chance to get my message out about Florida’s nature.”

In addition to a display of his book and prints, Moran narrates a very effective PowerPoint visual presentation of his work for his keynote appearances. And while on the art show/keynote speaker circuit, Moran is planning new photography-driven projects. On the agenda is a Journal of Light traveling museum exhibit, a Suwannee River rafting photographic adventure from the swamp to the sea, and a collaborative work of his photos with the writings of Marjorie Kinnan Rawlings.

“A friend and I are building the raft this summer,” says Moran, already eagerly anticipating the adventure. “The plan is to do the trip in the summer of 2006. It’ll be great.”

Moran considers himself a kindred spirit with Rawlings, best known as the author of The Yearling, and he appreciates her deep connection to Florida. There are many photos of her Cross Creek home in his collection.

“She understood that a place is not a thing; it’s a relationship,” he says. “I would like to bring our work and our love of Florida together in a book.”

A soft-spoken, thoughtful man, Moran thinks nature is viewed best with the wide-eyed wonder of a child. It is a persona that serves him well, almost as a sort of camouflage in his quest, as he puts it, “to make a picture.” He doesn’t intrude upon a natural setting; rather, he quietly submits himself to it. And he is willing to improvise, to use whatever method will provide the means to his end. He has climbed trees, hidden in blinds, laid down in the muck, gone out in thunderstorms, bundled up against freezing pre-dawn mornings, and cozied up to alligators.

“In photographing nature, you have to be humble,” he says. “You have to be willing to get up high, get low, get wet, get dirty in search of that one special picture. Not only do you have to be patient, but you have to persevere. Nature photography is about being alive, awake, and aware.”

That Moran has mastered all of these prerequisites is evident in his book, which features many photos taken in the Ocala/Marion County area. There is Beneath a Rainbow Spring, starring a peninsula cooter in the crystal blue water of Rainbow Springs State Park; A Haven for Fish, featuring schools and schools of silvery striped bass at Silver Glen Springs in the Ocala National Forest; Food for Thought, capturing a great blue heron fishing at Juniper Creek in the Ocala National Forest; Day Begins Anew, treating us to a stunning, multicolored sunrise at Orange Lake; and Moonrise Osprey, spying on a pair of nesting osprey backlit by the rising moon at Orange Lake.

“I have traveled through much of the state, and the Ocala/Marion County area is blessed with its own wonderful brand of Florida’s nature,” says Moran, who lives with his family near Newnan’s Lake outside of Gainesville. “It’s one of my favorite areas.”

A trio of photos shot in Marion County reveals much about Moran as a photographer and as a guardian of Florida’s natural wonders. The first, A Truce Declared, is both a story of the means Moran will go to in getting a photo, as well as about the sometimes-uneasy alliance of man and nature.

The photo itself is of a flock of sandhill cranes feeding in an Evinston cattle pasture at sunrise. The focus of the picture is two cranes engaging in what wildlife experts call “bill sparring” over the spilled cattle feed on the ground. To get that dramatic shot, Moran lay inside a homemade PVC pipe-and-burlap blind in the pasture.

The rest of the story is that cattle rancher Kay Richardson had an ongoing feud with the sandhill cranes until he finally declared a truce. The cranes often disrupted his winter rye grass seeding in their search for worms and insects. But even after trying to chase them away with an all-terrain vehicle and frighten them with a timed propane gas gun, the cranes kept coming back. Richardson finally just accepted their presence as part of the cycle of nature.

According to Moran, both the cranes and the rancher can legitimately claim the land as home.

“Naturalist William Bartram made note of the cranes’ presence in the area 200 years ago in his book, Travels,” Moran says in his accompanying essay to the picture, adding, “The Richardson family’s ranch dates back more than a hundred years.”

Wanting to share Florida’s nature and to preserve it presents an interesting dilemma for Moran, poignantly depicted in The Key to Solitude and Discovering Secret Florida. The influx of more and more people into Florida is having a direct impact on the state’s environment, and Moran’s first-hand experience of this during a summer weekend on the Silver River led to the making of The Key to Solitude.

After being appalled by the throng of boats and people on the Silver River, Moran knew he had had to find another way to enjoy this Marion County treasure.

“It was simple, really,” he says. “Just go before sunrise on a Monday in January when it’s 28 degrees.”

Thus, Moran enjoyed a time of solitude on the river and came away with a stunning picture to share with the rest of us. Another win-win situation.

But with Discovering Secret Florida, a photo of a haunting aquamarine spring, Moran decided to hold something back. We get the mesmerizing picture, but we don’t get the location of the shot this time.

“It’s in the Ocala National Forest,” explains Moran, “but that’s all I’m saying. My intention is not to tease, but rather to inspire everyone to discover and experience their own secret place in Florida. Mystery is good for the soul.”

For more information on John Moran and Journal of Light, go to johnmoranphoto.com