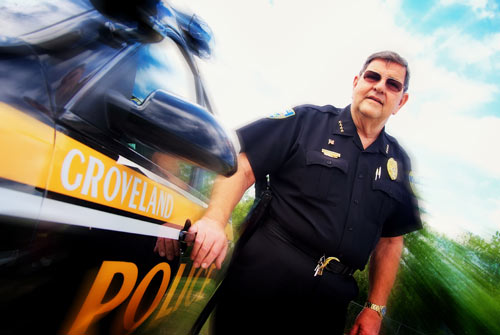 One cop. One shotgun. One patrol car. That sums up the Groveland Police Department in 1969 when T.R. “Tommy” Merrill became the chief of police. And by the way, Merrill was that one cop.

Today, the Groveland PD is 24 officers strong, including a K-9 officer, and there are multiple weapons and a patrol car for everyone. Also under the auspices of the Groveland PD is a seven-member Dispatch Unit and two code enforcement officers. The current GPD operating budget is $1.8 million. Oh yeah, and Merrill is still the police chief.

In fact, according to the Florida Peace Officers Association and the National Association of Chiefs of Police, Merrill is the longest-serving police chief in the United States. In 2006, the FPOA created the Distinguished Service Award to honor Merrill for his 37 years of duty. He’s since tacked on another four years to bring his total to 41 years. Quite an accomplishment by any accounting, but as far as Merrill is concerned, he’s just been doing a job he loves.

“During those early days when I was a one-man department, there were long, rough days,” recalls the 67-year-old. “If things were quiet, I’d go home and take a nap from 1am to 4am, then go back out on patrol. Then if I could, I’d take another nap late afternoon. But being a cop was what I liked to do more than anything.”

Merrill realized how much he was meant to be a cop after a nearly career-ending experience.

The Umatilla native joined the U.S. Air Force right out of high school and after four years as a nuclear weapons specialist, he returned to Lake County. Not long after, he signed up with the Eustis Police Department. One night, Merrill was making an arrest that first turned violent, then deadly.During a struggle, the suspect grabbed Merrill’s pistol and began shooting wildly. When Merrill regained control of the weapon, he shot and killed the man.

“It was very hard to live with,” says Merrill. “Back then we didn’t have therapy counseling. You were just expected to get over it on your own. I couldn’t so I ended up quitting.”

Merrill went to work for a car dealer, but he wasn’t happy. So when then Lake County Sheriff Willis McCall offered him the hardly glamorous position of Groveland police chief, Merrill took it. He was a happy man again.

“I realized I liked helping people, especially the young kids,” Merrill says. “In those days, I knew everyone in the area and if a kid got in trouble, I’d take him home and give his parents a chance to straighten him out. If that didn’t work, then the next time I’d have to take care of it.”

Slowly, Merrill began adding on to his department, even resorting to door-to-door recruiting. Such was the case with Tommy Leathers, who’d grown up in Groveland and then, like Merrill, joined the military out of high school. In 1972, Leathers had just arrived back from Vietnam when there was a knock at his door.

“I looked outside and there was a policeman standing there,” says Leathers. “I hadn’t been home long enough to get into trouble, so I was a little puzzled why he was there. It was Chief Merrill and he had come to talk to me about becoming a police officer. A couple of weeks later, I took him up on his offer. He became my mentor and my friend.”

A year later, on Merrill’s advice to go to work for state law enforcement, Leathers joined the Florida Highway Patrol. He would then go on to have a 30-year career with various state agencies before retiring. It was Leathers who while serving as president of the Florida Peace Officers Association initiated the research that led to Merrill’s recognition as the longest-serving police chief in the country—an honor, Leathers says, that was “very much deserved because no one loves his job and his town more than Chief Merrill.”

In four decades, Merrill has seen Groveland change from a small town dependent on the citrus groves to now a bedroom community for those escaping the bigger cities in nearby Orange County.

“When we had the citrus groves, our population would nearly double during picking season,” says Merrill. “But the harsh winters in the ‘80s wiped out the citrus industry and things began to change. Over the last decade, more and more people started moving in from Orange County for a quieter life. People wanted to get away from big-city crime.”

Merrill acknowledges that no place, not even small towns like Groveland with a current population of 7,200, is ever crime-free. But Merrill and his department remain vigilant in enforcing the law.

“We always have patrol cars out on the road,” says Merrill. “We like to take a proactive approach of intervention and prevention whenever possible.”

And according to Lt. Gayle Beck, who has been with the GPD for 27 years, Merrill practices what he preaches.

“There have been times when our officers had an arrest warrant on someone and they couldn’t find them,” says Beck, who serves multiple roles as head of the Dispatch Unit, certified corrections officer, and Merrill’s personal secretary. “Chief Merrill will go out and put the word out on the streets. Next thing we know, the person we’ve been looking for will turn himself in. Chief Merrill knows everybody and he’s very well respected.”

During his days off, Merrill enjoys spending time with his wife, Ginger, and their 10 grandchildren or climbing up on his John Deere tractor to do some work on his land. He has no immediate plans for retirement.

“I love getting up in the morning to come to work,” says Merrill, who will still jump in a patrol car if needed. “I like putting bad people away and helping good people. That’s what I want to do as long as I can.”
Posted in Uncategorized