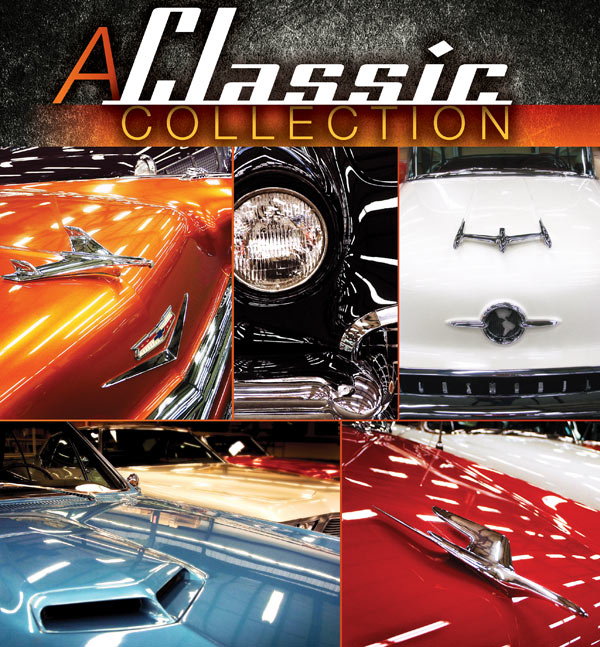 Fiesta red and black, the 1957 Mercury Turnpike Cruiser is an attention-getter. When other motorists spot what driver and owner Rick Schmidt describes as “a rolling circus,” eyes widen and heads turn. Flanked on the road by today’s cars, many of which are little more than various shaped metal boxes on wheels, the Cruiser is a flashy automotive rock star.

And that was exactly the point when Mercury, which up until the Cruiser had been known for its conservative line of cars, decided to go a little wild. Hence the Turnpike Cruiser with its powerful V-8 engine, bold two-tone colors, and signature oversized fender skirts. The Cruiser came with special options like air conditioning and power push-button windows, including the back window! Mercury produced the Cruiser in 1957 and 1958, manufacturing a mere 1,265 with a base sticker price of $4,103. 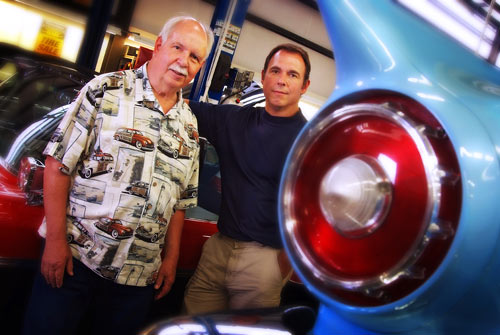 Father and son (L–R) Jim and Rick Schmidt of National Parts Depot share a passion for classic cars. Today, their business is home to 175 vehicles with 130 of them right here in Ocala.

Riding in the Cruiser is like being in a motorized time machine. You’re sure that if you turn on the radio, you’ll hear Elvis singing “Jailhouse Rock.” Your mind starts playing a 1957-edition Trivial Pursuit: Dwight D. Eisenhower was president and Richard Nixon was vice president, Leave It To Beaver was on TV, a postage stamp cost 3 cents, and the Milwaukee Braves won the World Series in seven games over the Yankees.

From another day and time, the Cruiser is part of National Parts Depot’s unique collection of iconic American cars. The collection, begun by NPD founder and Rick’s father Jim Schmidt, numbers 175 with 130 of those residing in the company’s Ocala warehouse. Step into the 30,000-square-foot area dedicated to the classic cars and you know instantly that this is not a State Road 200 dealership. 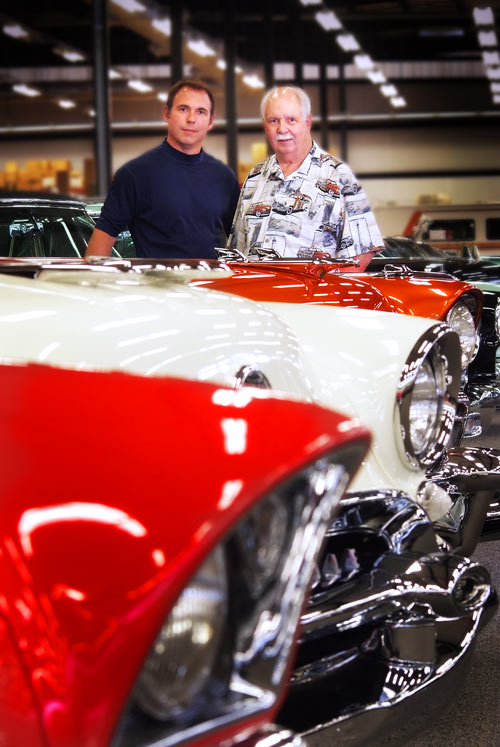 Walking down the center aisle, head swiveling side to side, a visitor has trouble processing all the makes and models. A quick sampling includes a 1928 Ford Model A Sports Coupe, the first car restored by Jim as a teenager; a 1930 Lincoln V-8 Sedan; a 1955 Ford Thunderbird; a 1956 Packard 400; a 1964 Chevrolet Impala SS327; and a 1966 Cadillac Coupe DeVille. Beyond the normal palette of colors, the cars come in such unusual hues as Scottish Heather, Honolulu Blue, and Thebes Green.

Have a need for speed? There are more than a dozen Ford Mustangs, including a 1968 Shelby Cobra GT500KR Fastback and a 1969 Boss 429. Check out the 1967 Pontiac GTO Sports Coupe or the 1969 Pontiac Firebird 400 Coupe. These cars will make you wish there was an American Autobahn!

From antiques to touring and sports cars, the NPD collection seemingly covers all bases. But the most important criteria might come as a surprise. 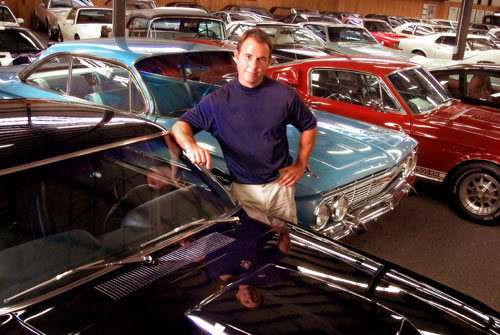 “I’ve always had a genuine affinity for rolling art,” says Jim, 67, of his lifelong passion for cars. “I’ve always been attracted to very original cars that I thought would endure the test of time. We don’t collect cars just to collect cars. We want something original and unique.”

And that’s just what drove 14-year-old, car-crazy Jim, growing up in Ohio, to want to restore a Model A. Bought for $50 at a junkyard, the 1928 Ford Model A would not only be his first restoration project, but would lay the foundation for NPD.

“The Model A was really a rusted mess,” recalls Jim. “I had to replace pretty much every nut, bolt, pin, just about all the hardware and fasteners. It wasn’t easy finding the parts, so when I would find any, I’d buy more than I needed. And my father had a machinist and engineering background, so we started making some of the restoration parts to sell to other people.”

By the time he was 16, Jim was selling Model A restoration kits to all the major parts warehouses in the Midwest. He was also driving a 1957 Thunderbird, which he describes as his first real car.

“It was black and could go 140 miles an hour,” says Jim. “Because we didn’t have a lot of money, I had to do all the maintenance myself. That car taught me a lot.” 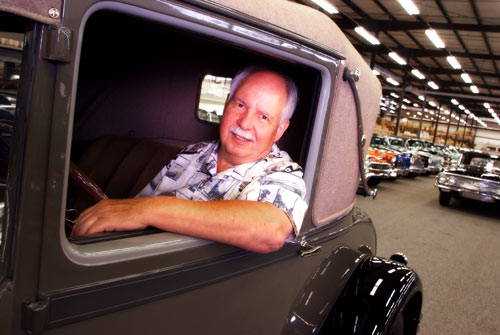 The Model A had put Jim on the restoration parts business path and the Thunderbird accelerated the pace. After a move to Gainesville where he ran his father’s pneumatic cylinders manufacturing company, Jim decided it was time to strike out on his own. In 1976, he sold his Model A fastener company and founded National Parts Depot as a mail-order catalog business. Operating from his home’s basement, his first parts catalog was for 1955-57 Thunderbirds followed by a restoration catalog for Ford Mustangs. Soon, the NPD business outgrew the basement.

In 1979, a 21,000-square-foot NPD warehouse opened in Gainesville. That was followed by NPD divisions in California (1982), Michigan (1984), North Carolina (1991), and Ocala (1999). Not surprisingly, today it’s the largest restoration auto parts supply company in the industry. And it all started with that 1928 Model A Sports Coupe and a young boy’s passion.

Three years into getting his business degree from the University of Florida, Rick Schmidt took a break from college to help with the ever-growing NPD. He never returned. In 1995, Rick became the vice president and chief operating officer of the company, and when the 160,000-square-foot warehouse opened in Ocala in 1999, it became Rick’s home corporate office. Framed original car ads line the walls of the large public entry; cars from the collection are rotated for display there as well. Auto show awards won by cars from the NPD collection are on walls and shelves.

Behind the order call center and out of public view is the massive warehouse of restoration parts inventory. But with the NPD customer base continuing to grow—and Rick says they are “an inventory-intensive company”—a 200,000-square-foot addition to the Ocala warehouse is currently under construction.

“I love cars,” says Rick, 42, who grew up working on them and driving them. “When my sister and I were growing up, my dad began buying classic cars to restore and then resell. It was how he built up our college fund. Then once that was taken care of and the company was doing well, he began collecting cars and it just kept growing from there.”

Rick inherited his father’s passion for collecting special cars, not giving in to the hot trend of the day. They have amassed their collection Rick says “by being discriminating buyers instead of cliché buyers.” His father has always been drawn to Ford models, which dominate the collection, but later developed a liking for Cadillacs and Lincolns, too. Rick leans toward the speed demons like the Mustangs and GTOs. One of his favorites to take out for a drive is a 1967 Pontiac GTO Sports Coupe with a restored 400-horsepower engine.

“We like cars in as [much of] their most original state as possible,” says Rick. “The best ones are the ones with low mileage and original parts. Those are the ones we like to go after. We buy from other private collectors, at auctions, off eBay, all kinds of places. The discovery, the chase, and then the acquisition—in that order—are what get us excited.”

NPD participates in various car shows around the country, including hosting shows in January and October at Silver Springs Nature Park. If the show is within 100 miles, Rick likes to pick a car to drive to it. Otherwise cars are loaded up on a trailer and hauled to the shows. Maintaining a collection as big as NPD’s takes a special person and in this case that’s Larry Galyean. Rick describes Larry as “our car collection curator.” Larry oversees a restoration garage just for the NPD collection.

When asked the most popular car for restoration, Rick immediately answers, “The Mustang.”

“The classic Mustangs are the 800-pound gorillas of the restoration industry,” says Rick, who has a soft spot for the car himself. “It’s a huge market. The cars and the parts are available fairly economically. Someone can pick up an old Mustang for $1,000 and have a lot of fun restoring it and then driving it.”

And who knows, it just might turn a few heads, too.