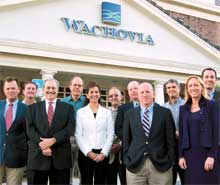 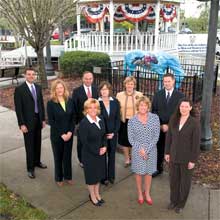 In an age when it seems new banks pop up like mushrooms after a rain storm, and at the same time everything has gone global, Wachovia Bank strikes an appealing balance between local service and national clout.  An experienced local team with a clear focus on customer service gives Wachovia a small bank feel.

Founded in 1879 in Winston, North Carolina, Wachovia merged with First Union in 2001, to become the 4th largest bank in the United States in assets. Including the Golden West merger, which closed on October 1, 2006, Wachovia, has retail and commercial banking operations in 21 states with 3,400 retail banking offices from Florida to Connecticut and west to Texas and California.

Susan Crabb believes great customer service separates Wachovia from other banks. Currently serving as the bank’s Ocala board chairperson, her affiliation with Wachovia and First Union, goes back 15 years.

“It doesn’t matter which branch or who you talk to,” Susan says, “they are always helpful.”

For the sixth consecutive year, Wachovia was rated No.1 in customer satisfaction by the American Customer Satisfaction Index (University of Michigan), outperforming industry peers. Consumer Reports and J.D. Power are among other publications that find the same level of satisfaction among Wachovia customers. Within Wachovia, Ocala is ranked fourth in customer service out of 92 markets within Community Banking.

“What small banks pride themselves on,” says President Dave Fechtman, “we replicate, but with all the resources of a large bank.”

Wachovia’s Community Bank model is based on local leadership and decision-making.  In Ocala, Fechtman and local underwriter Ed Haddock approve loan requests up to 10 million dollars.

“It’s a very efficient model,” Fechtman says. “It is very local and we understand the community.  This sets us apart from the competition.”

“Most large banks have centralized decision making,” says Fechtman, “and may have to send applications to Philadelphia or Atlanta for a decision by people who don’t know a thing about Ocala or its customers.”

Wachovia and its leaders are also committed to the Ocala and Marion County community. Each year, the Wachovia staff donates hundreds of hours of community service.  The company’s support is reflected in its policy of providing paid time off to the staff who volunteers their time.  The commitment extends to financial support as well, including over 20 local agencies last year, among them the Public Education Foundation of Marion County, United Way and the March of Dimes.

President Dave Fechtman is one of the newest members of the Ocala team, but he is not new to Wachovia.  He had over eight years of regional and national banking experience when he arrived in Ocala September, 2006, from North Carolina, where Wachovia
is headquartered.

“It was a homecoming to me,” says Fechtman, who grew up in Port St. Lucie, and attended Florida Atlantic University, where he met his wife Lorri.

”Wachovia brought me back to Florida to oversee a very seasoned team already in place, so we haven’t skipped a beat.” Fechtman added, “And with a business banking team that has over 100 years of Wachovia Bank experience, I’m excited about all the opportunities in the great community of Ocala.”