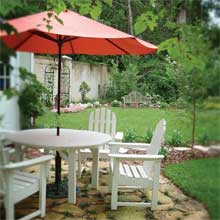 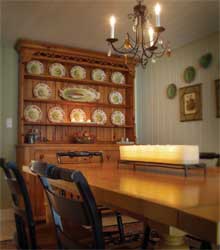 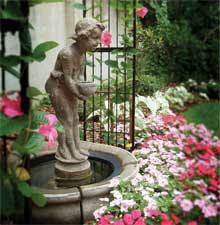 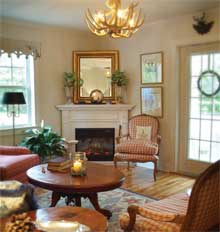 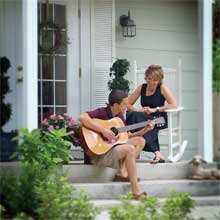 The twig birdhouse arbor hints at the owner’s intentions. Its Bleeding Heart vine invites guests to walk underneath, leading to the front porch where a lamb statuary sits beside a pot of ivy. Vibrant colored annuals spill out of window boxes along the sage green clapboard siding.

Sherry Smith has created an intimate sanctuary in her Ocala home even before one enters the front door. Situated in between stately structures in the historic district, Smith’s 1,200 square-foot home is small in size, but big in heart — exactly what she was hoping for.

“I needed to downsize,” Smith recalls, “and wanted to turn this house into a cute cottage.”

Smith set her goal in motion when she purchased the 1950s-era home last year. The structure was in poor condition and required extensive renovation. Three hurricanes hindered the project, though not the spirit of those involved.

“There was a lot of blood, sweat, and tears to keep things on task,” says Smith, “Dave Carder, who was in charge of construction, literally had to re-roof the structure between each storm.”

Smith credits Carder with the successful renovation that took only six months to finish, including complete re-wiring and plumbing.

“The whole house had to be gutted,” says Carder, “It was a challenge and I wanted to make sure it was done right for Sherry.”

Smith is also grateful to architectural designer Jerry Stevens for reviving the run-down home to a bucolic bungalow.

“The most dramatic thing we did to Sherry’s space was move the entry,” says Stevens, “There was no need for foyer pretense in such a small space, so rather than have a foyer create some sense of arrival, we’re now greeted by the wonderful scale and warmth of the living room.”

Stevens says this architectural shift allowed the creation of a small entry porch where there was previously a flat wall.

Such dedication is evident in the home’s décor. Smith, a real estate sales counselor, is also a talented landscaper whose sense of style resonates in every space, both inside and out.

An elegantly carved antler chandelier greets guests upon entering the family room, serving as the home’s point of entry. Rich reds and blue toile dress the furniture beside an oak table and dresser. A white distressed armoire discreetly hides a television set. Across the room is a cleverly designed electric fireplace holding command as the room’s focal point. And an oversized gilded mirror sits above the mantel, reflecting the room’s comfortable ambience.

“We were pleased with the way the kitchen turned out,” says Schubert, “Every space is efficiently utilized with modern-day conveniences in a classic bead board style.”

Schubert says his favorite space is the island that incorporates both a raised eating bar and oven cooktop, though he notes a partiality to the inconspicuous built-in ironing board in the nearby laundry room.

A hallway appointed with family photos and watercolors leads into the dining room, which serves as a reminder that small spaces can handle big pieces of furniture. An overscale pine hutch frames the side wall housing Smith’s treasured pink-and-green Limoges china. A simple, wrought-iron chandelier hangs over a pine table with black stenciled Hitchcock chairs.

“This room was originally the porch, so I kept the tongue-in-groove paneling,” says Smith.

The dining room pays homage to its outdoor origin with walls decorated in fishing motifs. As a matter of fact, fishing artifacts are found throughout the home, which is just fine with Smith, an avid fly-fisher.

“I love to fish, so I keep reminders of fishing around me,” she adds.

The master bedroom, which was formerly the garage, steps off the dining room and is bathed in cool creams and blissful blues. Smith even bumped out a closet to create a space for her home office. A large window next to the desk reveals a glimpse of the peaceful backyard. The master bath is simply styled in white eyelet as a miniature crystal chandelier hangs in the adjoining walk-in closet.

The other side of the dining room houses a second bedroom and bath for Smith’s son, Adam, whose cherry antique twin beds grace the khaki and red color scheme.

“After we moved in, Adam told me how much he loves this home,” Smith says.

Adam also enjoys the newly installed hot tub on the back porch. A red wicker chaise provides the perfect spot to unwind and take in the backyard’s natural beauty.

Here is where Smith’s landscaping talent shines. Every area has been carefully attended, from the classic cottage shed to the stone walkway. This is a true oasis as a visual and visceral refuge. Mondo grass creeps through a limestone patio housing a table and chairs for entertaining. An iron arbor commands center stage above a water fountain surrounded by pink impatiens and mandevillas. Nearby, a pebble gravel walkway leads to Smith’s lush perennial and fragrant herb garden. Creeping fig climbs up the back concrete wall, lending a serene backdrop to the enclosed area. Whimsical figures grace Smith’s lawn with metal dragon flies, frogs, and curious bugs.

It’s Smith’s secret garden, but not a secret she wants to keep.

“I want friends and family to enjoy my home and yard,” says Smith.

The back deck is Carder’s favorite part of the project as well.

“We built the deck from scratch where there was originally only a wooden step,” says Carder.

“Sherry saw the potential and did the whole project on a small budget,” adds Stevens, “Working with someone as kind and talented as Sherry makes for a nice smile when all is said and done.”

“I thoroughly enjoyed working with Sherry, who was very much a part of every step,” says Schubert.

Just off the back porch stands a rustic sign nestled among the fuchsia hued garden flowers. It reads, “Simplify.”

Nicely put for a home where less really is more.

How to Have a Cottage Garden
Sherry Smith shares a few landscaping tips:
1. Have a plan.
2. Provide solid backdrops like fences, walls, or hedges.
3. Plant for blooms throughout the year and not just one season.
4. Add interest and whimsy with statuaries and objects d’ art.
5. Create a calm focal point with a fountain, Koi pond, or waterfall.