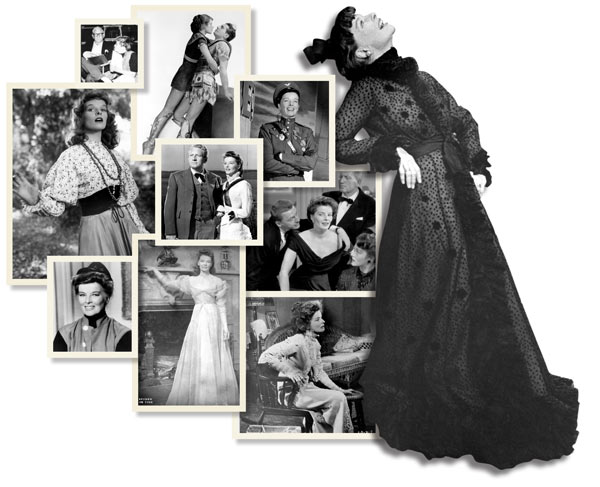 A Date With Kate

Every so often an actor, actress, athlete or musician has such an impact on society that their influence is felt for generations. Katharine Hepburn, also known as “The Great Kate,” is one such figure. During her eight-decade-long career, she not only set and continues to hold the record for Academy Award-winning performances by an actress, but she also set a new standard for women’s fashions with her outspoken, and often fiery, behavior both on and off the set.

Though women today may take their clothing options for granted, women of the ‘40s and ‘50s did not. Katharine broke the mold by feminizing traditionally masculine attire.Trousers and jackets became her signature style. And while many of her starring roles were filmed in black and white, Katharine was concerned with and intricately involved in the design of her characters’ costumes.

Katharine’s passion for fashion led her to purchase many of the famous costumes she donned over the span of her career. Before her death in 2003, she requested that her treasured outfits be given to an educational institution and never be sold at auction. In 2008, Kent State University acquired many of the legendary actress’s costumes and publicity outfits from her estate. Katharine Hepburn: Dressed for Stage and Screen was unveiled on October 2, 2010 and was featured at Kent State University through September 4, 2011. The one-of-a-kind exhibit not only features clothing, including her trademark beige trousers, but also film posters and memorabilia from such films as Stage Door, Adam’s Rib and Long Day’s Journey Into Night.

Beginning on November 19, Ocala’s Appleton Museum of Art will showcase this renowned collection. The museum will also host several exciting events to accompany it, including lectures and film viewings.

“We are so excited to have this opportunity,” says Dr. John Lofgren, Appleton’s museum director. “This is not a fashion show. It’s a costume show that showcases the art of costume design, and it’s appropriate that the exhibit be featured in an art museum.” Katharine was instrumental in the design of her costumes, working with designers to ensure that her costumes really made her feel as though she really were a Russian officer, an Amazon woman or even the legendary Coco Chanel.

“She played so many different characters but yet maintained her personality in each role,” says Ruth Grim, curator of exhibitions for the Appleton. “Her costumes helped her get into character, yet she was still always Katharine.”

To help give a thorough understanding of the artistry and technique of costume design, stills and film posters will accompany the featured costumes.

“We want viewers to understand the context of each costume so they can appreciate the era it is depicting,” says Ruth. And she, along with the staff at the Appleton, have been hard at work creating the perfect setting to showcase the collection.

“It’s going to look completely different in here. We’re all having a lot of fun with this, and it’s really going to be a stunning show,” says Dr. Lofgren. “We’ve wanted to expand our offerings here at the Appleton, and with Ocala’s rich film history, we think a lot of people will be able to relate to this.”

Yet there is more to the exhibit than Katharine’s costume collection. Also featured are outfits Katharine wore to public events.

“She was such a trailblazer for women’s fashions,” says Ruth. “We don’t even realize what she did for today’s generation of women. She was one of the first women to use her persona to change the face of fashion.”

The exhibit is first and foremost an art exhibit with the intention to highlight the art of costume design and fashion. However, one can’t help but appreciate the historical aspect of the costumes and film memorabilia, too.

The Appleton Museum will also offer a special package tour called “Date with Kate.” The package is being offered four times over the course of the exhibit and combines a docent tour of the exhibit, a special lunch in the café and the viewing of a classic Hepburn film in the auditorium.

“The special afternoon package really will be like a date with Kate in all aspects, as viewers will see some of Katharine’s most treasured attire and dine on some of her very own recipes.

“She was known for her burgundy chicken and for making brownies for everyone on the set, so it’s only fitting that we have both dishes on the menu,” says Dr. Lofgren, who is optimistic that this exhibit will be a success.

Some who grew up in Katharine’s era may feel a spark of nostalgia, while younger fans of fashion might be interested in Katharine’s daring influence on the evolution of women’s trends. One thing is certain, Katharine Hepburn’s fiery and larger-than-life persona made waves decades ago, and even years after her death, she manages to keep people talking today.

November 20 The Philadelphia Story viewing in the auditorium (2pm)

December 11 State of the Union viewing in the auditorium (2pm)

January 8 On Golden Pond viewing in the auditorium (2pm)