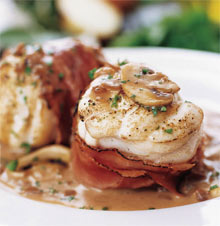 Just about five years ago, two best buddies from St. Petersburg who loved to fish and also happened to be veteran restaurateurs, dreamed of creating a restaurant that would offer the freshest fish served a variety of ways.

With this in mind, partners Tim Curci and Chris Parker launched Bonefish Grill in January 2000, naming it after a favorite tropical sport fish that puts up a good fight and offers a tasty reward. About two years ago, Outback Steakhouse bought into the concept and Bonefish Grill has since grown tremendously. The Ocala venue, which opened on March 28, is the 71st store in the mostly southeastern restaurant chain.

We’re considered ‘polished casual,’” explains Kendall Smith, managing partner of the Ocala restaurant. Indeed, lighting is pleasantly subdued and décor is sleek and sophisticated, although the restaurant’s atmosphere is perhaps a bit too boisterous to be considered as a spot for a quiet romantic dinner. But as a place for celebrating or meeting friends for dinner, Bonefish Grill definitely scores. Service is superb and the wait staff, looking quite professional in crisp white chef’s jackets, is well versed in all of the menu offerings. Our server, Shawn Masters, answered our questions about the specials and entrees with knowledge and a witty sense of humor.

All fish entrees are seasoned and cooked over an oak wood grill, resulting in moist and incredibly tender dishes that are then crowned with your choice of one of Bonefish’s signature homemade sauces and toppings.

On Shawn’s recommendation, we began with the starter menu where nine different creations can be found. We gave high marks to the Bang Bang Shrimp, tender and flavorful shrimp tossed in a creamy, yet spicy sauce and mounded high in the serving dish. The Bacon Wrapped Sea Scallops were a perfect contrast to the spicy shrimp. The scallops were fresh and delicately flavored and served with warm mango salsa, which was the ideal accompaniment. We ate every delicious bite of the Ahi Tuna Sashimi starter, which highlights thinly sliced, sesame-seared Ahi Tuna with pickled ginger and wasabi. Sublime!

“I come here for the Bang Bang Shrimp,” said patron Adam Burrows, admitting he drove all the way from Inverness just for the appetizer, which he followed up with the Ahi Tuna entrée.

Other starter options include the very popular Mussels Josephine, Crispy Calamari, Coconut Crusted Shrimp, Crab Cakes, Cajun Chicken Egg Roll, and Saucy Shrimp. For a few dollars more, your server can turn your favorite appetizer into an entrée by adding a side and a salad, so be sure to inquire about this option if you can’t get enough of something on the starter menu.

Bonefish has a substantial wine list and a full bar, which was packed to the gills (pun intended!) on the weeknight we dined. A varied martini menu puts the restaurant on par with those found in much larger cities.

“This will be the place in town to come for martinis,” Kendall suggests.

After sampling the “Hpnotiq” martini, I am not about to argue. The flavors of rum, pineapple, and Hpnotiq liqueur bring to mind a balmy tropical evening scented by ocean breezes. The drink is enchantingly served with a blue glow stick in the glass.

Other tempting martinis on the menu include the Georgia Peach, a Sour Apple Martini, a Chocolate Martini, the Lemon Drop, the Icicle Aphrodisiac, an Espresso Martini, the Floridian, and several others, including the requisite cranberry-hued Cosmopolitan.

All entrees are served with a house or Caesar salad, a fresh seasonal vegetable, and a side item. I tell you this up front so you will be warned — as my partner and I were not! — that if you savor the appetizers, dive into the bread basket, and eat all your salad, you will likely not be able to finish your entrée, let alone dessert.

In this era of carb banishing, maybe some patrons will find it easy to pass up the clever metal basket that cradles a loaf of warm, Tuscan bread in a cloth napkin. I am not that strong and make no apologies for indulging in not one, but two of the hearty slices of crusty bread with the savory oil and pesto dipping sauce that our server stirred up at the table.

As one might expect from the name, fish is the recommended main course at Bonefish Grill. This is not to say that fish is all you can order, however. Chicken Marsala; an 11-ounce USDA choice Sirloin Steak; a nine-ounce USDA Filet Mignon; Lily’s Chicken, fire roasted and topped with Chevre goat cheese, wilted spinach and garlic wine sauce; Fontina Chops, two-inch thick boneless pork chops topped with Fontina cheese and mushroom garlic wine cause; Tenderloin Portabella Piccata, a garlic crumb-dusted pork tenderloin grilled and topped with portabella piccata sauce; and Chicken Portabella Pasta are also on the menu.

But for the seafood lover, this is one restaurant where your cravings can surely be satisfied.

A huge fan of sea bass done right, I was surprised to find it on the regular menu, as many restaurants feature it only as an occasional special. Shawn’s suggestion of ordering it Pan Asian style from among the sauce choices was excellent. The thick filet was succulent and flavorful and I was soon in sea bass heaven.

Jack, my partner in life and for this dining adventure, ordered the Atlantic Swordfish. (When an Oklahoma cowboy opts for fish instead of steak, you know a restaurant is doing something right!) All those images from The Perfect Storm vanished from my mind when he offered me a bite. I’ve had swordfish steak before, but nothing like this incredibly tender and ever-so-faintly sweet piece of fish. It was perfectly complemented by the Lemon Butter Sauce.

Your one side item, combined with the fresh seasonal vegetable, entrée, bread, and starter all add up to a most filling meal, with most entrees well under $20.

Shawn had warned us ahead of time that dessert wasn’t an option. Although this meant we had to request boxes to take home the remainder of our entrees, we were glad we followed his advice on the sweet ending. (For the record, servers are required to draw their own rendition of the Bonefish Grill logo on any takeout box, which adds a personal, and sometimes amusing, touch to the end of your meal.)

Three dessert choices are always on the menu — Crème Brulee, Deep Dish Key Lime Pie, and Chocolate Macadamia Nut Brownie Cake. We went for the brownie and were soon sighing in chocolate bliss.

Patrons Mary and Randy Macey were also enjoying their first visit to Bonefish Grill on the night we dined. The couple had ordered the grouper and the sea scallops/gulf shrimp dinners. Those healthy choices were right in line with their South Beach diet, but they doubted the Deep Dish Key Lime Pie they planned to order for dessert fit in any diet plan. That wasn’t going to stop them, however, they confessed with smiles.

After our experience, Bonefish Grill should quickly become a favorite spot for great seafood in a friendly setting. Now if only I can order something other than the sea bass on my next visit!