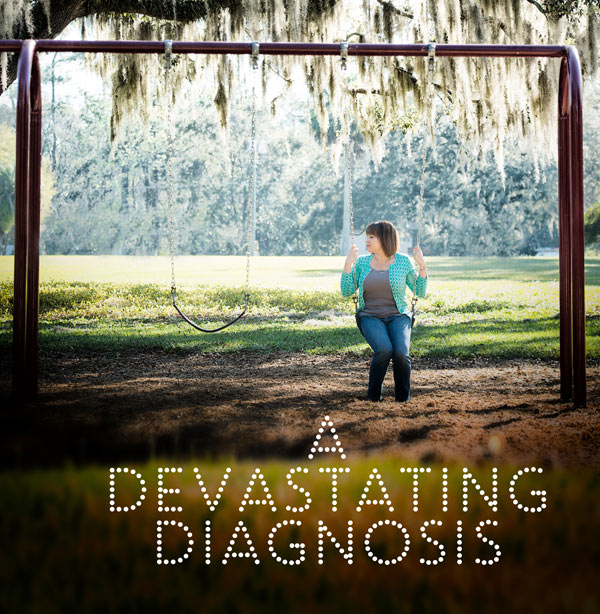 There’s no denying that all children suffer their fair share of bumps and bruises over the years, but most manage to make it to adulthood with only a few visible scars. And although any childhood illness can have devastating consequences. Sometimes, it’s not the everyday bumps and bruises that are the biggest cause of concern. We think of disease as something an adult experiences. Children shouldn’t have to deal with the side effects of horrible medications or the pain of sometimes terminal diseases. But they do. And cancer remains the No. 1 cause of disease-related death in children. Such a profound statistic should be enough for pediatric cancer to be a major headline in health magazines and journals nationwide, but it is on very few people’s radar. Why?

“Because children aren’t supposed to die,” says Ocala resident Misty Miller. “No one ever sees it coming.” Misty’s daughter, Shayla, was one of cancer’s youngest victims.

Very few people can comprehend the life-altering effect of a cancer diagnosis the way Misty Miller can. In August 2010, Misty’s perfectly healthy 3-year-old daughter, Shayla, wasn’t feeling well. Misty assumed, as any parent would, that her vibrant, energetic Shayla had picked up a bug somewhere.

A quick trip to the doctor’s office confirmed a case of strep throat, and she was sent home with an antibiotic and given a clean bill of health after a re-check a few days later.

“She was herself again, and we had a great weekend,” says Misty. Yet within a few days Shayla appeared to have suffered a relapse of some sort and began vomiting. There were no signs of a fever or other symptoms. Another trip to the doctor confirmed that pneumonia was the diagnosis this time around. Shayla and Misty returned home with a new round of antibiotics.

Still believing her daughter was suffering from a typical childhood illness, Misty recruited her mother to watch Shayla while she resumed her normal routine, never imagining what was to come. She soon received a call that set in motion a chain of events that would change her life forever.

“I was on my way to work, and my mom called and said Shayla was screaming and vomiting.” Misty recalls turning the car around immediately to return home. Knowing now that something wasn’t right, Misty rushed Shayla to the emergency room.

“We waited forever,” she says. “The doctors examined her but couldn’t explain why she was vomiting so much.” Then, things went from bad to worse.

While waiting in the exam room, Misty watched as Shayla, who was crying only moments ago, slipped into what she describes as a “deer-in-the-headlights” state and then slowly into unresponsiveness. In what seemed like a matter of minutes, Shayla was being rushed to Shands Hospital in Gainesville where Misty would receive the most life-altering news of her life.

After a thorough exam and plenty of tests, Shayla was diagnosed with medulloblastoma, an extremely aggressive and highly malignant brain tumor.

Cancer is an “Old-Person’s Disease”

“What does this mean,” Misty remembers asking the doctors. She was in a state of disbelief—her daughter seemed perfectly healthy just two weeks earlier. The next steps involved emergency surgery to remove the tumor followed by weeks of aggressive chemotherapy and radiation treatments. By September, it appeared that Shayla, who still had many months of treatment ahead, would be able to leave the hospital and return home to her family.

“Everything was going great, and the nurses were preparing me for caring for Shayla at home and handling all of her meds,” she says. But once again Misty’s heart was shattered as Shayla began experiencing non-stop seizures and was swept away to the pediatric intensive care unit where she was placed in a medically induced coma.

Shayla remained on a respirator until November 13, when doctors explained to Misty that Shayla didn’t have any brain activity left. The devastating diagnosis was a result of multiple tiny tumors that continued to form and burst in her brain.

“My daughter was perfectly healthy; her birth was perfect; she was never sick, never fussy; it just didn’t make sense to me,” says Misty. The hardest, most painful decision she ever made was the decision to remove 3-year-old Shayla from the respirator. “She turned a shade of blue, which they said was normal. I was left alone to give her her final bath, which was one of the most beautiful experiences I’ve had with her. She was out of pain now,” says Misty of her final moments with Shayla. Her daughter’s diagnosis and death happened quickly and seemingly without warning.

To this day, Misty, like most parents whose child receives a cancer diagnosis, is still in disbelief.

“This doesn’t happen to kids,” Misty says. “Cancer is an old-person’s disease.” 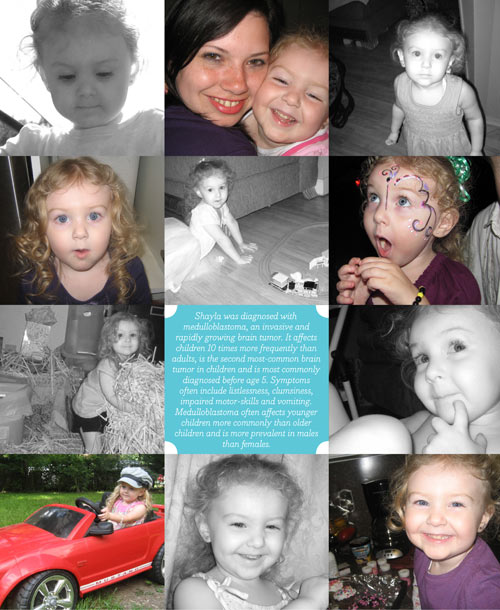 Unfortunately, though, cancer isn’t just an “old-person’s” disease. Each year more than 15,000 new cases of pediatric cancer are diagnosed, which, according to the National Cancer Institute, is a 29 percent increase from 20 years ago. One out of every four children diagnosed will not survive the next five years of their life.

Dr. William Slayton, a pediatric oncologist at Shands Hospital explains that the cancers that affect children are different from those that tend to target adults and, because of this, are often difficult to diagnose and treat.

“Survival rates for certain types of childhood cancer are still very poor,” Dr. Slayton says, adding that while childhood leukemia and lymphoma survival rates are quite high, certain brain tumors and brainstem cancers have extremely low survival rates. Some children are even considered terminal upon diagnosis.

Part of the reason for this grim statistic has to do with a combination of the aggressiveness of certain cancers and the difficulty in diagnosing them. Shayla’s tumor was so aggressive that doctors believe it could have developed quickly enough to claim her life in a matter of weeks.

“I think in general, both parents and pediatricians assume that children are healthy and may attribute non-specific symptoms that may arise from cancer to benign causes,” says Dr. Slayton. Misty agrees, recalling that some of the symptoms of Shayla’s cancer included clumsiness, sight or hearing changes and vomiting.

She makes a valid point, as medical professionals note one of the major difficulties in diagnosing cancer in young children is their inability to adequately assess their own health and express their symptoms. And because some childhood cancers grow and spread very quickly, diagnosis often comes well after a tumor has had a chance to grow. By the time Shayla was diagnosed, she was already at stage 3.

The Curse Of The Cure

Cancer doesn’t claim all its childhood victims, though. As research and technology continue to advance, the rate of survival of many young cancer victims also improves. But these cures often come with a cost. Although the average age of death for a child with cancer is just 8 years old, those who do survive past the five-year remission mark are nowhere near out of the woods.

“Most of our traditional chemotherapy and radiation treatments have long-term side effects,” says Dr. Slayton. “These can include serious problems such as heart failure, infertility and secondary cancer.” Furthermore, radiation therapy, as Shayla was scheduled to receive after her rounds of chemotherapy were completed, often damages cognitive function, leading to learning disabilities and impaired psychological development. According to the American Childhood Cancer Organization, childhood cancer survivors are also at an increased risk for chronic health conditions as they age.

“Shayla was going to receive chemotherapy for six months, followed by radiation therapy,” says Misty. “She already had lost much of her cognitive abilities from the brain surgery. She had to re-learn how to talk, walk and eat again,” says Misty, recalling the difficulty of explaining to a newly potty-trained toddler why she needed to wear diapers again. “What choice do you have though? We had to treat her.”

And although research proves that the effects of these intense treatments often lead to multiple long-term side effects for children, drug manufacturers and cancer researchers still tend to target their focus primarily on adult-specific cancers. A mere 4 percent of the National Cancer Institute’s budget is allocated for pediatric cancer research—and that’s all pediatric cancers combined. Over the past 20 years, the FDA approved only one new drug developed specifically to treat childhood cancers, while over 50 were approved for use in adults.

Hope On The Horizon

No one can predict how, who and when cancer will strike. Nor can anyone predict how individuals will respond to treatment and how those treatments will affect them for the long haul. Although many groups voice that childhood cancer research is greatly under-funded compared to adult cancers, such as breast or prostate cancer, many positive steps have been taken to see that funding reaches cancer’s youngest victims.

The Creating Hope Act is one such step in the right direction. Established in 2012, the act offers incentives for drug companies to develop medications and treatment methods designed specifically to treat a child’s delicate body. Dr. Slayton adds that new medications are now in the testing phase that would target just cancerous cells while leaving normal cells alone.

And although this new headway into child-specific treatment is a victory for pediatric oncologists and researchers alike, the advancements come too late for parents like Misty.

“We never thought we would leave without her,” she says through tears. “I ask myself all the time if there was anything I could have done, something I missed,” she says, adding that she worries every day about her 20-month-old daughter, Aubree, praying that the condition isn’t genetic.

Although doctors, including Dr. Slayton maintain that the best ways to avoid cancers at any age are to eat right, exercise, avoid smoking and maintain a consistent relationship with a family doctor, Misty offers this piece of advice for parents.

“Don’t take one single second for granted. Shayla had the strength of a thousand men, and things that would bring grown men to their knees she faced with a smile. I never for one second thought this would happen to us. Don’t miss out on any time with them; they are so precious.”

For more information on childhood cancer or to find support groups, visit: