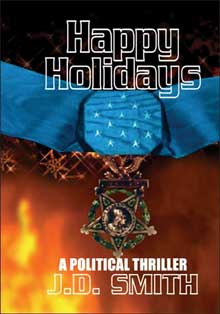 John Smith is the most common name in the English language, and in Marion County, its one that most people associate with the public school system. Since rising to the top of the local profession in an 8-year term as superintendent, most of us lost track of our John Smith, the scholarly administrator. Little did we know he was leading…

John Smith’s typical day starts while most of us are in R.E.M. slumber, long before the first crack of dawn or the first beeps of an alarm clock. By 5:30, he’s already at his computer, pecking on the keys with the letters that will comprise the vivid descriptions of his core characters and the vital elements that will carry his intricate plots. He tries as best he can to keep up with the images in his head.

“I just describe what’s there,” Smith says, “but I add a few things as I go along.”

Over several years and with the discipline of a firm daily routine, Smith’s words began to add up. Soon, the chapters of a book were being knocked off, one by one. Occasionally, Smith would get into a creative zone and write for hours at a time. In the thick of the process, he realized that his characters would jump off the computer screen, that he was “living” with them and their situations.

The book has been a moderate success, allowing Smith to travel the state, signing his labor of love at larger bookstores across Florida. Although he has received a fair bit of attention so far, he remains unabashedly humble about the whole process.

“Creative writing has been a hobby of mine for more than 20 years,” he says. “In fact, my brother Bill, an English teacher at Vanguard High School, is really the one who got me going.”

While Smith was climbing the rungs of the educational ladder in the ‘80s — first as assistant principal at Vanguard and then as principal of North Marion Middle — he was also beginning to live his “other” life as a published author. Since they both shared a love of the outdoors, Smith and his brother began to send stories to Florida Wildlife magazine. He found a receptive audience in its editor and more than a dozen of the Smith brothers’ tales were printed in the regionally produced publication.

Only when Smith became principal of Forest High in 1987 did he have to scale back his writing projects. Of course, an eight-year run as superintendent from 1992 to 2000 required most of his available time, limiting his writing career to the occasional professional journal.

No matter how infrequent, Smith knew he had to continue writing.

When Smith accepted a position in 2001 as an assistant professor of educational leadership at St. Leo University, he recognized the timing was almost ideal for a larger writing project.

“At the end of my tenure as superintendent, I became more aware of St. Leo and its programs,” Smith recalls. “I was impressed with the university’s progressiveness and high academic standards. My principals would tell me that they would pick a St. Leo grad over almost anyone else.”

In 2003, he was named St. Leo’s director of graduate studies in education. Once again, Smith had found a balanced situation in which to resume his writings. This time, though, it would be on a much grander scale.

“That creativeness started to emerge again,” Smith continues, “and I had always wanted to write a novel.”

Once again, Bill helped him through the often-tedious process of getting his thoughts on the screen, this time with the mechanics of writing. True to his character, Smith’s gentle, self-effacing personality takes over when describing the beginnings of what would become Happy Holidays.

“I enjoy political science,” he chuckles, “but most people who know me would say this novel is out of character.”

Set against the backdrop of global terrorism, the book’s plot describes an intricate conspiracy to overthrow the presidency of the United States. The intrigue spills into several counties, affecting all of his central characters. It features fast-paced action, descriptive narrative, and concise dialogue, hallmarks of some of Smith’s favorite authors: David Baldacci, Tom Clancy, and John Grisham.

“The story is about Jake Stahl, a Congressional Medal of Honor winner who, during his military career, is a colonel responsible for special operatives,” says Smith. “He was framed for being involved and is sent to prison for 10 years. When he gets out, his whole career is gone.”

Following the fictional colonel’s release from prison, the bombings start. But that’s not all.

“Coinciding with Stahl’s release,” Smith continues, “is a president who has staked his career on an advanced satellite technology system that’s able to detect any type of communication through a database of key words.”

Toss in a bitter senator with presidential aspirations and lots of high-octane action and you have the base of Happy Holidays. Most of all, Smith enjoyed conducting the intensive research to ensure the intricate details were precise.

“I wanted everything to be as close to reality, in terms of accuracy,” he shares. “I learned a lot along the way.”

Smith’s Internet proficiency led him to the far corners of international government. Despite the fact that many of our country’s most-sensitive locations — The Pentagon, The White House, The West Wing — must disclose public information, Smith was surprised at how much he was able to uncover. Not only did the information help with what he had to say, it helped with how he said it.

“I could go to The White House online and read official items from the press secretary to get a feel for the format.”

Smith also went across the Atlantic, via his computer, in his quest for Robert Ludlum-like verisimilitude.

“One of the characters is a professor at Oxford University, so I got on the Internet and looked at pictures of everything. Of course,” Smith admits, “you also have to add a little imagination.”

Although he started Happy Holidays in 2000, Smith acknowledges the aftermath of 9/11 increased awareness in this type of terrorist plot.

“We all knew about terrorists, but not in the way we know them today,” he says. “I even used al Qaeda as the conspirators.”

Once again, Smith turned to his family for support. His wife, Billie Kay, “reads 150 to 200 books a year,” says Smith, and agreed to serve as editor through the process. Paulette, his sister and a professor at Central Florida Community College, proofed several chapters and previewed the final manuscript.

“The first time she read it,” Smith remembers, “she got goose bumps.”

Not surprisingly, Smith is already at work on his next novel. As he politely introduces some of the characters, his eyes light up as he divulges the basic plot. A full 180-degree turn from his last project, Sand Dollars is set in Key West and describes how a $5 million inheritance affects a fishing guide and his wife, a waitress at the local restaurant. Imagine A Simple Plan if it were written by Where The Heart Is author Billie Letts.

With rich characters, an evocative setting, and a thoughtful premise, his next book sounds like a keeper and should keep his second career intact for a while. And, come tomorrow morning, at 5:30 sharp, you know right where author John “J.D.” Smith will be — perched at his keyboard in a world of his own creation, racing to keep up with his thoughts.

And loving every minute.

Turn the Page
An Excerpt from Happy Holidays: A Political Thriller

Following his release from prison, [Jake] Stahl picked up the pieces of his broken life. But, initially, a lack of money relegated him to the life of a derelict. For weeks, he moved nomadically from one town to another, finding work where he could, living hand to mouth.

A shadow of his former self…

Instinctively, he made his way to California, where he’d spent most of his life and military career. Strangely, the west coast offered hope and, perhaps one day, the opportunity to even the score with those he still held responsible for his dramatic and costly downfall.

Stahl had “no comment” about his past, his present, or most noticeably, his future. Apparently, the terrorists he once worked so hard to prosecute weren’t the only ones adept at flying under society’s radar.

Happy Holidays is available for $19.95 at Amazon.com or local bookstores. Call 624-2048 for more information.