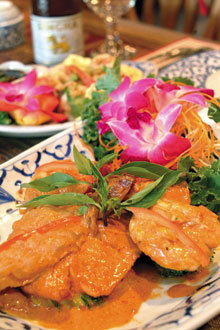 Fanciers of fabulous jewelry have long prized Thailand’s stunning Siamese rubies. Happily for lovers of Thai cuisine, discovering authentic Thai dining isn’t nearly as challenging as finding rare and precious rubies. You simply have to show up at Thai Ruby, settle back in your seat, and prepare to enjoy.

Somphot (known as “May” to her friends), and husband Keith McDaniel, have done a masterful job of bringing the culinary treasures of her native country to Ocala. Word of mouth has spread quickly about the cozy restaurant, which is tucked inconspicuously into College Park Plaza, directly across from the Paddock Mall.

Your taste buds aren’t the only thing in for a treat. May pulled out all the stops when it came to decorating and the result is a restful spot that delights all the senses. While Keith was at home building the wooden booths by hand, May jetted over to Thailand for a two-and-a-half week shopping spree. She purchased enough to fill a shipping container to send back to the States, brimming with furniture and decorative pieces. (“I’m a good shopper!” she says with a laugh.) Keeping Ocala in mind, she even scouted out two striking hand-carved wooden wall hangings of horses, which are prominently displayed in the restaurant’s entry.

May and Keith worked diligently this summer to turn a plain space into a tiny slice of Thailand and have clearly succeeded. They completed the detailed woodwork on the wall, installed the booths, and set up teak chairs around the dining tables in comfortable arrangements. Among the numerous finishing touches are intricately detailed pillows in every booth, a carved altar stand, table linens with an oriental touch, and serving dishes direct from Bangkok. In the background, instrumental Thai music is soft enough not to be intrusive, but just loud enough to be pleasantly audible during a lull in conversation. Wait staff in Thai costume add to the overwhelming sense of being in a place far from Ocala.

If the atmosphere kick starts your appetite, the savory aromas escaping from the kitchen will put that appetite into overdrive.

Unless you are already familiar with the extensive menu and know what you want, placate your growling stomach by ordering an appetizer. This will give you time to peruse the menu offerings and make a decision. You can’t go wrong with Thai Ruby’s Sampler (for two), a substantial appetizer platter featuring pairs of egg rolls, Thai spring rolls, fried wontons, Crab Rangoon, and Bangkok Fried Shrimp.

Ten different soups are listed on the menu, tempting you to start your meal with a small bowl. On the night of our visit we sampled the coconut soup, an intriguing offering that was both slightly sweet and quite flavorful. Additional choices include Shrimp Rice Soup, Crabmeat Soup, traditional Wonton Soup and several others.

“Yum” was what we were already thinking, having consumed our soup and appetizer, but we soon discovered that “Yum” is Thai for salad. We decided to save room for our entrees, but were enticed by the numerous and varied Yum selections, such as Yum Seafood (shrimp, squid and scallops with onions, bell peppers, lemon grass, chili paste and lime juice, served on a bed of lettuce), and Yum Woon Sen (bean thread seasoned with chicken, straw mushrooms, onions and lime juice, served on green salad).

Choosing an entrée was difficult, simply because there are so many.

In the end, May — who does much of the cooking herself — came to our rescue and suggested two dishes from among the Thai Ruby Specialties entrées. We were grateful, as there are literally several pages of entrées, ranging from vegetarian and noodles to shrimp and seafood, pork, beef and chicken. (These are in addition to the page of Thai Ruby Specialties!)

When our entrees arrived, we were wowed by the artful presentation, complete with a brilliant purple orchid bloom perched on the serving platter, and a delicate butterfly created from a slice of carrot, (also May’s handiwork, we learned). But our delight at the food’s appearance increased tenfold once we started eating.

We feasted on Snapper Lad Prig, a whole fresh Red Snapper, delicately fried and accompanied by gently cooked vegetables and a savory Thai chili sauce bursting with flavor. Since we were two dear friends dining together, it was serendipitous that May suggested Two Friends Panang as a second entrée. This award-winning entrée marries tender prawns and chicken with fresh asparagus, steamed mixed vegetables and an incredible Thai red curry sauce. There was just enough “kick” to the sauce to enhance the dish, but certainly not enough that it could be labeled “hot.” May says that this is one of their most popular entrées. (No argument from us on that statement!)

The uninitiated may fear that anything with the word “curry” in it will be spicy and strong. Fortunately, this is not the case. Entrees on the menu with a chili pepper symbol next to the name are prepared mildly hot and spicy, but they can be altered to medium hot or very hot, at your request.

Those inclined to healthful meals will be pleased to find an entire page devoted to Macrobiotic entrées. Thai Ruby also offers brown rice, a choice not routinely found in oriental restaurants. Dinner entrée prices are quite reasonable, with a large number of choices in the $8.95 to $15.95 range.

Desert choices include several sweet treats, such as Thai Ruby Lychee (exotic fruits atop homemade coconut ice cream), and Crunchy Banana Coins (bite-sized pieces of fresh banana wrapped in rice paper, deep fried and topped with honey and sesame seeds). In the end, we opted for Thai Donuts. This was the perfect ending to a sumptuous meal. Small pieces of sweet fried dough (no hole in the middle) were accompanied by a thick cream sauce dusted with chopped peanuts.

This is the third restaurant May has owned and, if practice makes perfect, one meal at Thai Ruby proves that she’s certainly close to perfection, if not already there. Chatting with May, we learned that her given Thai name of Somphot means “festival.” Clearly, she and her husband have brought a festival of Thai cuisine to Ocala, one that will draw many repeat patrons, this writer included.

Cynthia McFarland is a fulltime freelance writer who considers chocolate one of the basic food groups. She ranks “sharing good food with good friends” among the necessities of life. She can be reached at cynthia@ocalastyle.com