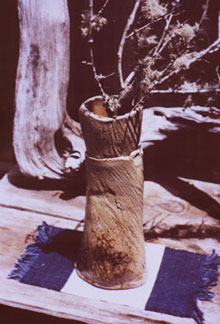 What does it mean to be an artist? For those of us who can only observe the end product of others’ creativity, it’s hard to understand. What is the process? It seems like magic. We watch with awe and envy as beautiful objects seem to come from thin air. Yet we know there must somehow be a connection that we don’t understand, but that the artist uses to take tools and raw materials and, with them, express an idea.

In talking with Gary Haskins — potter, painter sculptor, and poet — the connection becomes crystal clear. This quiet man is the fortunate artist who, though working in many disciplines, has found a particular medium in wood-fired ceramics that allows him to fully express his ideas and feelings. His success as an artist seems to stem from working in a way that is harmonious with his personality and outlook on life, something he has done to acclaim and recognition over a 34-year career, beginning halfway across the world.

“My study in Japan was the most formative and transformative influence in my career,” states Haskins, who studied under Buyo Shin in Okayama, Japan. Bizenware — a rustic, unglazed, high-temperature, wood-fired pottery — was the focus of his studies which took him back to the Orient several times, for a total of five years abroad.

“When I first went in 1969, I had just had a year of ceramics in college. So I arrived a hobbyist, and suddenly found myself in a professional studio.”

It was an immersive experience Haskins naturally found intimidating. In these studios he learned this ancient process of working with extremely high-temperature kilns where the detail in the pottery comes from wood ash build up.

In Japan he also learned that often an artist’s toughest lesson is how to take criticism. “I don’t think people realize what it’s like to be a foreigner studying with masters who criticize your work. It’s some kind of education.”

Born in 1944 in Washington D.C. and raised in Ft. Lauderdale, Haskins received his B.A. in English from Florida Atlantic University. He returned to Florida after his first trip to Japan with the goal of starting a pottery. He feels his move to this area was “meant to be” as he arrived under somewhat false pretenses.

“I came here looking for clay, and after a realtor showed me a great place in Cross Creek, I contacted a professor of geology I had been referred to at the University of Florida who had just completed a four-year statewide study on clay. He knew the location of every clay deposit in the state.”

Calling him from a hotel, Gary was given some surprising advice — “just go and buy it.” He quickly discovered that there is no good natural resource for pottery-grade clay in Florida. But by then he was in love with the area. He and artist Kate Barnes started a pottery, producing their own work, often hosting grad students from UF for “some serious wood firing.”

In keeping with the Japanese process, the kiln — a large, outdoor, brick affair made by hand — must be fed day and night for three days, getting hotter and hotter in order to achieve desired temperatures.

“Loading the kiln is an art in itself. You need competent help or you’re not going to make it,” states Gary, whose quiet nature gives way to animated smiles as he describes the process. “I had the biggest kiln in the state at one time,” he says wryly.

Wood firings are real events, bringing friends and other artists together for the collective tasks of chopping wood, monitoring safety, and bringing food. Working as a group, they must keep the process going in order to reach a mutual goal of creating something really special.

“The thrill for me is to invite the unexpected to leave its marks on my pieces, which are now moving more into the abstract with more of an American spirit of experimentation.” He explains this evolution: “Years ago I realized I could not keep on the Japanese aesthetic exclusively, because you can’t depend on someone else’s culture to make yourself do what you yourself have come here to do.”

Though his product is changing, his process is steeped in his study of eastern culture — Buddhism, flower arrangement, and the placement of pottery in garden design — which he says culminate in “an understanding of how to live a simple life and understand the value of simple pleasures.”

Haskins continues to create pottery while working in other media.

“I have a high bar of creativity I have to live up to.”

Haskins has won numerous awards for his varying work. Since the age of 15 he has written poetry for which he has received recognition. A painting of his was chosen as the poster image for the 2001 Kanapaha Paint Out and was a finalist in a national poster competition.

“So much of pottery is vessel-making,” he explains, “which I do because it’s fun and I was trained by the best in the world.”

With summers in northern Vermont and winters in McIntosh, and work in galleries all over the east coast, what’s next for this quiet man?

“Abstract stuff where you just take clay and don’t know what you’re making,” he answers. “That’s where I’m headed.”

Paula King enjoys freelance writing as an opportunity to express her passion about Ocala as a place to work and live. She is the founding chairman of the board of directors of Marion Cultural Alliance, and her literary favorites include Jane Austen, Emily Dickinson, Somerset Maugham and Pat Conroy. She can be reached at paula@ocalastyle.com

Gary Haskins’ work can be seen at the Icehouse Gallery