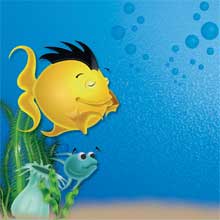 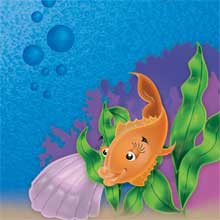 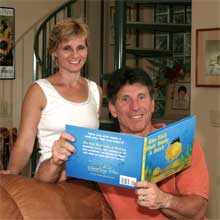 Before it was a book, The Fish That Made A Wish was a poem inspired by a walk on the beach and some wishful thinking.

“My family and I were walking on the beach in Melbourne,” recalls author Michael J. Cooper, an Ocala-based real estate and business attorney who has written poems nearly all his life. “I was looking out into the water and thinking about all the creatures [that] live in the ocean. And I wondered what if the fish could see us and think what it would be like to live on land. The first stanza of the poem came to me very quickly and then the rest just flowed. Soon as I could, I wrote it down.”

The poem about a fish who wishes he could live on land became part of Cooper’s ever-growing collection of creative work, ranging from poetry to plays. Cooper began writing poems during high school typing classes.

“When we were supposed to be practicing our typing, I was typing poems,” he says. “It was a creative way to get through a boring class.”

When Ocala artist Mary Verrandeaux began thinking of illustrating a children’s book, she asked longtime friend Cooper to read through his poems.

“I had read some of Michael’s poems over the years and always loved his work,” she says. “As soon as I read The Fish That Made A Wish, the visual just jumped out at me. I immediately saw the main fish character, his buddies, and the sea environment in my mind. I knew we had to do this book.”

Verrandeaux, who graduated from the Ringling School of Art & Design and is a well-known multimedia artist, envisioned a bright yellow fish with a black mohawk haircut. He came to life in a world of blue, accompanied by fish buddies of purple, orange, and green. Aimed at Pre-K through first grade, this book is sort of an underwater version of the grass is always greener on the other side combined with a little of being careful what you wish for. In the end, the fish learns a simple but profound lesson of being happy with your true nature.

“I could only work on the illustrations in the evenings, usually between 10 and midnight,” says Verrandeaux. “So it was a slow process, stretching out over more than a year. But I had such a good time doing it. I looked forward to spending time with the characters every night and was almost sad when it was done.”

Much like the fish in the book, Cooper and Verrandeaux had a wish, too. Theirs was to see their collaboration transformed into a book. And from that wish was born Shooting Star Publishing. The independent publishing company was founded by Verrandeaux, artist John Tripodi, and writer David Wayne Stroud in April 2005.

“It just seemed like the next logical step,” explains Verrandeaux. “After doing the fish book, I knew this was something I wanted to do more of and I knew other very talented people who were interested in similar projects.”

The Fish That Made A Wish became the first book in the Shooting Star Publishing catalog last summer, being quickly followed by two other children’s books. Also published by the company are Wiggles The White Blood Cell, written by Stroud and illustrated by Tripodi, and Funny Dust & Honey & The Giant Carrot, written by Stroud and illustrated by Swannee Nardandrea. Future projects include more children’s books, a novel, and a collection of poetry.

Getting The Fish That Made A Wish out to the public, in particular the young public, has been an experience for Verrandeaux and Cooper.

“We’ve really enjoyed having book signings and meeting people,” says Verrandeaux. “It’s nice to see the public respond so well to the book.”

For Cooper, doing readings at schools has been a highlight.

“It’s been great reading the book to the kids and seeing their reactions,” he says. “It’s been a wonderful experience.”

For more information on The Fish That Made A Wish and/or Shooting Star Publishing, visit shootingstarpublishing.com or call (352) 369-3952.