“The Official Florida Flamingo Museum” is right here in Ocala.

There is a floor-to-ceiling explosion of pink flamingos—which would be called a flamboyance in a natural setting—inside Cindy Dunlow Frames in the Six Gun Plaza in east Ocala. There are so many of the iconic colorful and leggy birds nesting here that Dunlow once set a mark for flamingo-related items recognized by the Guinness World Records.

Dunlow calls her ever-growing brood “The Official Florida Flamingo Museum.” While it only took 793 items to set the Guinness record in 2016, her collection now numbers nearly 1,500 items.

The late Deborah Buscher Leck, of West Virginia, holds the new world record, as of 2019, with 2,595 items. Her family continued her quest for the title after she passed away.

Dunlow, who was “blinged out” for her Ocala Style photo session, with flamingo clothing, jewelry, and shoes, says she has no desire to attempt a new world record but still enjoys having visitors peruse the wide variety of flamingos in her museum.

Many of the flamingos or related items were made for her by loved ones, friends and customers. They range from a 5-foot stuffed bird to tiny statues, paintings, a crocheted pair of fledglings, images embossed on Christmas ornaments, coffee mugs and wine glasses, and even a commode. None of the display items are for sale as “they are priceless,” she enthuses.

Dunlow says she started collecting items of the leggy avian species after her family visited Florida from their native New Jersey in the 1960s and she saw iconic pink images all over the Sunshine State.

“People know I really love flamingos, but it didn’t really take off until, I think it was 2014, when I brought my collection into the shop,” she shares. “It is whimsical, it’s fun, it’s colorful. So, I thought, well, I’ll let everybody else enjoy it, too, never thinking it would evolve into this.”

Spreading her arms wide and then picking up one item, she adds, “People love to bring me donations and gifts. A customer painted this for me on a turkey feather.”

Dunlow has fond memories of those family vacations, recalling frequent visits to the Silver Springs attraction. At the front of her shop is a display with a large photo showing her on a glass-bottom boat ride in 1962. She also showcases reproductions of vintage post cards that show popular attractions such as the former Six Gun Territory, for which the shopping plaza is named, and which, ironically, she never visited. 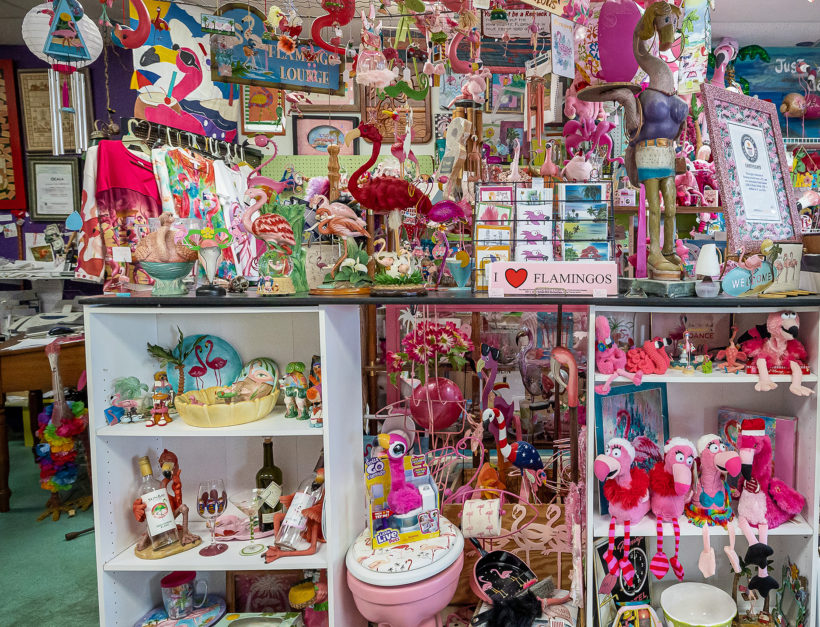 “People enjoy going down memory lane. And I go, ‘You know, you’re standing on Six Gun Territory property’ here in my store,” she offers. “We always came to Silver Springs but never went to Six Gun. I remember when I was 5 years old, I got my Annie Oakley cowgirl outfit with my gun and holster. I thought for sure we would have come here, but we didn’t.”

She says Six Gun Plaza, at 4901 E. Silver Springs Blvd., was built on the site of the attraction property in the early 1980s. She opened her frame shop there in 1999.

In an extension of the family’s love of Florida, Dunlow’s sister Joanne Zeliff also moved to Ocala and was the wildlife manager at the Silver Springs attraction for decades, until it became a state park.

“To this day she’ll reminisce and start crying,” Dunlow shares. “She loved that place so much.”

As for how she got into making custom frames, Dunlow says she was always an artist but fell into the field almost by accident.

“I had to pay my way through college, so I went to the guidance counselor and said I need a job with art. They said all we have is this one listing and I said let me go for the interview,” she recalls. “It was in Jersey, for a family of art wholesalers. I worked for them for nine years. I learned on the job because, back then, this was 1973, there weren’t very many women framers. The framers came from Europe, generally men, and they did gold-leafing and hand-carved frames, the type you see in museums.”

She said one of the family members would go into New York City with wholesale orders and people would say, ‘Can you frame this?’ He bought me a used mat cutter and says, ‘Here, figure out how to use this.’ So, I did. We had a beautiful gallery and sold all kinds of art.”

After she moved to Ocala, Dunlow went to work at the Ben Franklin arts and crafts store.

“I loved it. That was the best time of my life. We had so much fun,” she says wistfully. “I had 12 people under me. It was down the road, where Sav-A-Lot is, across from the Ocala Shopping Center. I built that frame shop from scratch and hired everybody. We had a warehouse in the back—the skating rink, that was our warehouse. We had classrooms back there and extra storage, and I had my shop where we cut all the molding.”

She says she can frame anything, and it is all custom work.

“That’s mainly what I do because I don’t have the room—because of the flamingos—to have ready-made frames,” she says with a laugh. “And usually what people bring in, they’re not standard sizes and they want something unique and different and special.”

Dunlow counts second and third generations among her clientele and says she is so busy she doesn’t have time to create artworks for herself anymore.

But she still has time to collect things, including coconut head items and bowling balls, but only the colorful ones, which line the driveway at her home. Some of her favorites among the flamingo pieces have bird heads mounted on coconut bodies.

“My oldest piece is a flamingo made out of a coconut… that’s my second love, remember the coconut heads from the ‘60s, the banks?” she poses. “In my coconut head collection, I have almost 90 now.”

When asked if she ever thinks of trying for a world record with that collection she quickly and firmly offers, “No. Not going there!”

She says achieving the Guinness World Record for the flamingo items took an army of volunteers and countless hours
of documentation.

She used to sell plastic pink lawn flamingos, until the mom-and-pop business she bought them from closed during the COVID-19 pandemic. She does sell notecards created by local artists and “I (heart symbol) Flamingos” bumper stickers she designed herself.

Dunlow says rainy days often guarantee she will get some museum visitors as people seek options for things to do until the sun comes back out.

“Sometime people come in and say, ‘Is this is all you have?’ Then there are other people who go, ‘Wow this is awesome!’ she offers. “I’ve had repeat people come year after year… that’s what makes me keep going with it.”  OS

Six species of flamingos may be found throughout the world’s warmer regions, near shallow lakes and lagoons, especially estuaries and saline or alkaline lakes. They feed on organisms in the water and their signature color, which can range from pastel to vibrant pink, varies based on their diet.

The National Audubon Society announced in 2018 that historical evidence suggests flamingos are a species in recovery in Florida after being nearly wiped out by hunters and poachers. Ornithologists have long debated whether our state’s long-legged waders were escapees from captivity or are natives. The society’s announcement noted that a conservation and research specialist and colleagues scoured records, collections and science tallies and concluded the species probably originated and nested in Florida until the turn of the last century and that the numbers of flamingos are too high to be explained by captive individuals that escaped.

Some of the places live flamingos may be seen in Florida include:

You can find lesser, Chilean and Caribbean flamingos in the Bird Gardens, Egypt and Nairobi areas. buschgardens.com

At this family resort, you can request the Flamingo Mingle upgrade experience to help feed Caribbean flamingos. discoverycove.com

You may see flamingos at Kilimanjaro Safaris, Wild Africa Trek, Savor the Savanna, the Tree of Life and the Animal Kingdom Lodge. disneyworld.disney.go.com

The park covers 1.5 million acres and there are more than 300 species of birds, including flamingos. A good place to see them is at Snake Bight Trail. nps.gov

You may be able to feed flamingos by purchasing a Wildlife Encounter ticket at this 60-acre tropical botanic garden and wildlife sanctuary. flamingogardens.com

This 50-acre zoo in the Panhandle is home to more than 900 exotic animals including flamingos. gbzoo.com

Joseph Widener imported flamingos from Cuba to inhabit the infield lake in 1934. The infield is now a National Audubon Sanctuary. The birds have been featured in television shows and feature films. hialeahparkcasino.com

Six guests per day may be able to have some personal time with the resident celebrity flamingos. Otherwise, just stroll the grounds to admire all the butterflies and birds. keywestbutterfly.com

Caribbean flamingos can be seen in the Adventure Park area. lioncountrysafari.com

You can see American and Chilean flamingos here. palmbeachzoo.org

The gardens are home to more than 200 native and exotic animals, including flamingos. Friendly birds often greet guests and you may be able to hand feed them. sarasotajunglegardens.com

More than 40 American flamingos may show up to greet you at the entry plaza. zoomiami.org