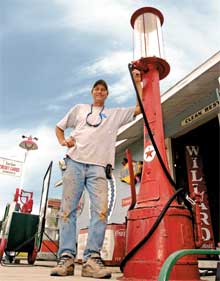 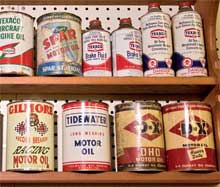 Goin’ junkin’. That’s what we do for fun,” says Judd Olson.

Judd and his wife, Donna, travel the Southeast in their pickup truck in search of old gas station and soft drink machine memorabilia to haul back to their Lake County home. The pair head out every chance they get, when his overnight job as a concrete finisher at Disney World permits.

“Collecting advertising signs has become a big thing,” says Judd, adding that Florida has already been cleaned out of the kinds of memorabilia he collects. These days, most of his best finds are in Georgia and North Carolina, at advertising sign auctions, and in small, out-of-the-way towns.

“I always liked the gas station and old soda pop stuff. That’s what got me started in it,” he says, gesturing toward a large restaurant sign in the bed of his truck. “Now, if it’s not big and heavy, I don’t like it.”

Ten years ago, the couple’s single-story Florida Cracker-style home on Sugarloaf Mountain was filled to overflowing with Judd’s antique obsessions. But Donna finally put her foot down. “It was either my junk or me,” Judd laughs. So he built his own personal 1,400-square-foot museum next to his home, loosely modeling the exterior after a 1950s-era gas station and garage.

Judd’s collection represents a considerable investment — one he hopes will pay off someday when he retires.

Although you might think the restoration of old signs increases their value, it often has the opposite effect, says Judd. On the other hand, refurbishing old soft drink machines, gas pumps, and certain large, deteriorated signs can add greatly to their value, he says. Some of his pieces have found their way into barbecue restaurants and private homes as off-beat decor. On occasion, he provides what he calls “the whole setup” — pouring the concrete islands and mounting the old gas pumps on them.

Judd says he used to provide wagon wheels, tools, and farm implements like plows and hay rakes for country-style parties and weddings. But he found the larger items too much trouble to transport, house, and maintain. However, he says he’s happy to rent out some of his smaller, more portable collectibles, as he did recently when a movie company shooting in Montverde needed some special props.

Like all serious collectors, Judd is always in search of special, rare, and prized items. At the top of his list is a case of Silent Chief motor oil which he says is so rare that a single can, either full or empty, could fetch as much as a thousand dollars. He already owns an extensive collection of oil cans. Some have familiar names like Sinclair Triple-X, Esso, Texaco, and Mobil; others are less well-known, like Amalie, Dixie, Wolf’s Head, and Mercury.

Judd and Donna eventually hope to move to west Tennessee after their 22-year-old son graduates from the University of North Florida. Their home, with its commanding view, is already up for sale in anticipation of that day. He says he’s not worried about unloading much of his collection when the time comes.

“I can make a couple of calls and make this all go away,” he says. Meanwhile, he patiently and enthusiastically receives the curious who regularly drop by unannounced — lured there, as we were, by the big Coca-Cola drugstore sign in his front yard.

“I get people every day,” he says. “They tell me what they have and we end up trading stuff.”

When he moves, Judd says he won’t entirely give up his collection, just sell some of it and transplant the remainder to a new location.

Judd says for him it isn’t monetary value or pride of ownership that’s most important when it comes to collecting.