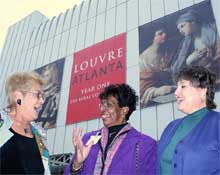 The three-year Louvre/Atlanta exhibition at the High Museum of Art in Atlanta brings a little touch of renaissance Paris to the contemporary mid-town museum.

The show is a unique collaboration between the Musée du Louvre in Paris and the High Museum, which recently opened a 312-square-foot expansion designed by Italian architect Renzo Piano.

As a former Atlanta resident and member of the High, I have been anxious to see the sleek new “front door” to the High since hearing about the renovations in 2005. The Louvre/Atlanta exhibit was the catalyst to stop talking about a trip to the High and make plans to go. Although my trip was only an eight-hour drive north, I felt like I’d been transported to Paris from the moment I entered the new gallery.

Several of the pieces on display have never been shown in the United States, including Raphael’s Portrait of Baldassare Castiglione, one of the Louvre’s top treasures and considered the male Mona Lisa. In fact, Baldassare’s portrait hung in place of the Mona Lisa when that painting was stolen in 1913 from the Louvre. Only one other undisputed Raphael portrait currently hangs in the U.S. — in the National Gallery in Washington, D.C.

More than 20,000 people a day visit the Musée du Louvre in Paris and 40 percent of them are Americans. Most are on a whirlwind tour and often don’t have the time to study the significance of the Louvre’s many collections. Many, like I did, focus on seeing the most famous Mona Lisa and remember little else about the museum that was once the Royal Palace in France.

Gerry Jenkins of The Villages remembers that was the case when she had a one-day tour of Paris years ago. “We went through quickly looking for the highlights before moving on to other Paris landmarks,” she says. “After seeing the Louvre/Atlanta exhibition, I will look at the Louvre Museum a little differently when I return to Paris with the Appleton trip in the spring.”

Louvre/Atlanta takes a small piece of the Louvre and explains why and how the collections are important. From 2006 until 2009, the High will present a series of exhibitions built around specific themes and periods from the 17th Century to the present.

The first, Year One: Royal Collections, runs until Sept. 2 and features works of art from the collections of France’s last three monarchs — Louis XIV, Louis XV, and Louis XVI, who was beheaded at the guillotine. Year Two: The Louvre and the Ancient World opens in October 2007. The final exhibition in the series, Year Three: The Louvre of Today and Tomorrow, is scheduled to open in October 2008. In addition, the Decorative Arts of the Kings will be added to the current series from March until September.

“The collaboration is amazing because the Louvre’s director could have gone to a museum like the Metropolitan where he could have had a reciprocal exchange,” says Dodie Jerz, trips and tours coordinator for Ocala’s Appleton Museum of Art, which sponsored two trips to see Louvre/Atlanta in 2006 and plans additional trips next fall.

Indeed, High Museum director Michael Shapiro has acknowledged that the Louvre has never had this sort of relationship with any American institution. Shapiro’s friendship with Louvre director Henri Loyrette led to the unique arrangement. The two met and became friends in 1999 when they collaborated to bring an Impressionism exhibit from France’s Musee d’Orsay, where Loyrette was director at the time, to the High.

Bringing the collections to the contemporary High Museum has given even the Louvre administrators and staff some new perspectives on its own collection. The High’s light-filled galleries have illuminated paintings in new ways and shown details that haven’t been seen before, such as the angel’s wing in Rembrandt’s St. Michael and the Angel. The wing was unseen even as recently as 2005 when the piece was shown at the National Gallery of Art, and art historians said that Rembrandt had “humanized” his angel. Astonished curators, however, saw the wisp of a wing when the masterpiece was uncrated in Atlanta.

This awe-inspiring oil painting, completed in 1661, has been a crowd favorite since Louvre/Atlanta opened last October. Rembrandt actually studied Raphael’s Baldassare portrait and now the two masterpieces hang facing each other in the Louvre/Atlanta exhibit.

With so much promotion about the 32 masterworks by Raphael, Rembrandt, Velazquez, and other painters, it’s easy to overlook some of the 60 drawings that are also on display — many for the first time. The intricate drawings were often just observations or first thoughts by the artists. My favorite, Raphael’s Study of the Head of an Angel, was the pattern for a fresco later completed in the Vatican.

In addition to the paintings and drawings, Louvre/Atlanta visitors enter the gallery through a glass-enclosed room featuring dozens of busts representing the Louvre’s earliest holdings from the 1700s. Although the marble busts are close together, sometimes making it difficult to weave through the aisles, they set the tone for the rest of the exhibition housed on the second and third floors of the new gallery addition.

“I did not expect the busts and those were really cool,” explains Laura Sherman of The Villages, who is a regular on the Appleton tours. “Although I liked the paintings the best, I really enjoyed walking through the rows and rows of busts.”

The best surprise, though, may be the very last painting near the exit of the special exhibition. Gallery of the Louvre, by American Samuel Morse of Morse telegraph fame, has never hung in the Paris museum. The oil painting is a synopsis of many Louvre masterpieces, as well as a self-portrait of Morse in the center. Morse, who founded the National Academy of Design in this country, painted the whimsical, yet accurate oil following a visit to the Louvre in the 1830s.

Upon leaving the world of the Renaissance masters, I could not help noticing the stark contrast of exiting straight into the High Museum’s permanent Contemporary Art collection. Although I liked the juxtaposition of old with new, some visitors did not.

“A lot of people like different things, but give me the old masters,” says Gerry Sandaker of Summerfield. “I like to see what other artists are doing, but I really prefer the old stuff.”

A trip to the High Museum certainly has something for everyone with more than 11,000 works of art in its permanent collection, including its own significant holdings of European and American art. The Louvre /Atlanta partnership adds a new dimension that makes a trip to Atlanta seem like springtime in Paris.

Ocala’s Appleton Museum of Art’s popular Trips and Tours program is gearing up for a variety of trips to museums and exhibits, including a tour to Paris in the late spring. Although details about the Paris trip were not available at press time, other tours have been announced and are filling fast. The following Appleton trips still have space available:

Feb. 22: St. Petersburg Museum of Fine Arts for the exhibit, Natura Morta: Still-Life Painting and the Medici Collections. This exhibition features more than 40 paintings from Italy’s Uffizi Gallery, the Pitti Palace and the Botanical Museum of Florence. Cost is $50.

April 19: The John and Mable Ringling Museum of Art in Sarasota for a docent-led tour of the exhibition, Encouraging American Genius: Master Paintings from the Corcoran Gallery of Art, which showcases works by Mary Cassatt, John Singer Sargent, Samuel Morse, and other American Artists. Cost is $50.

June 20: The Tom and Mary James/Raymond James Art Collection in Tampa is one of Florida’s largest private art collections with nearly 1,800 works of art. The unique collection is displayed in the public areas of the towers of the Raymond James corporate headquarters. Cost is $65 and includes lunch.

In the fall of 2007, the Appleton Museum will sponsor two more trips to Atlanta’s High Museum for Louvre/Atlanta Year Two: The Louvre and the Ancient World, which runs October 2007 through September 2008.

For more information about the Appleton’s Trips and Tours, contact Dodie Jerz, (352) 291-4456 or e-mail dodie@cf.edu. Reservations are taken on a first-come, first-served basis.