Camping is a popular way to experience Florida, but let’s face it, there are some serious drawbacks to spending the night outdoors during the summer—namely bugs, heat and humidity.

Plus, because we’re being honest here, camping tends to be the most fun for those who don’t have to do all the work. Sorry guys, sorry kids, but when it comes to camping, a lot of women “grin and bear it” in order to spend quality time with their families. There’s nothing glamorous about cooking over a campfire’s uneven flame, washing dishes in a bucket of lake water, bathing in the creek, sleeping on hard ground and battling mosquitoes until you fall asleep.

But what if there was a way to get away from the crowds and enjoy every aspect of the Sunshine State’s natural charms… while cooking in an actual kitchen, taking real showers instead of creek sponge baths and sleeping in a comfortable bed in air-conditioning?

“It’s the absolute best. This was our 13th year in a row. We think it’s well worth a trip to Florida every year,” says Diane Wemyss of Rockport, Massachusetts. Every spring, Diane and her husband Gary take a two-week houseboat vacation on the St. John’s River.

“I picked up a Holly Bluff Marina brochure many years ago when we were in Florida. Our kids were young then, so I kept it until I felt they were old enough to go out on a boat,” recalls Diane.

After the children got a little older, the family fell in love with houseboating. Those “kids” are now in college and “doing their own thing,” says Diane, but she and Gary savor their annual river vacation more than ever. Having a luxury houseboat to call home for two weeks makes it a dream getaway.

“It’s like a mini floating condo. You have a full kitchen and an inside sitting area, and the whole top of the boat is a big sun deck. The back deck has a grill with table and chairs. Star watching from the deck is beautiful.We never want for anything; it has everything you need,” notes Diane, who’s already booked a boat for their 2013 vacation.

“We cruise the river and watch the scenery. We tie up early every afternoon off the main river, settle in and watch nature. That’s really what we go for. It’s Florida with no Disney World,” says Diane, adding that her friends assume a Florida vacation means doing the usual crowded tourist attractions. “I tell them, ‘No, I was on a houseboat for two weeks.’ There’s a place for Disney, I’m sure, but this is just you and the river and the animals. We’ve had manatees come right up to the boat!” 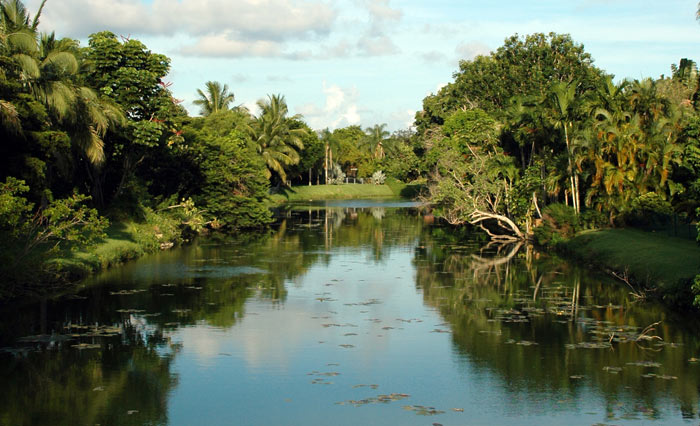 It may seem hard to believe, especially for anyone who’s spent time camping the traditional way,but literally, the only things you need to bring on board are food, drinks, clothing and personal toiletry items. As Diane points out, these houseboats are like mini floating motel rooms in the best sense of the word.

Boats vary in size from 40 to 60 feet, ranging from one to four bedrooms; some sleep eight to 10 comfortably. The cabins are climate controlled thanks to a trusty on-board generator. But don’t worry, these generators are quiet, unlike the old models that would keep you awake at night.

There’s a bathroom and showeron board, so you can play in the river all day if you like and still take a refreshing shower before slipping between cool, clean sheets at night. All bedding—even towels—is provided.

Truly a home away from home, your houseboat has a fully equipped kitchen, complete with dishes, pots and pans, utensils and everything you’ll need to prepare meals—all you have to bring are the groceries. Most boats have a microwave, full-size refrigerator and coffee maker, just like your kitchen at home.

Some come with a gas charbroiler on the deck, so you can relax with a cold one while a sizzling steak cooks to perfection on the grill. Dine up on the deck as the sun drops below the horizon, then lean back in your chair and do a little star-gazing. Away from city lights, you’ll be amazed at the brilliance—and abundance—of stars scattered across the night sky.

Of course, you don’t have to cook every night. Along the river, you’ll find fish camps and river communities where neighborhood restaurants often serve up fresh gator tail, locally caught fish and even fresh blue crab.

In our area of Florida, the St. John’s River is one of the most popular places to rent a houseboat for your getaway on the water.

Most of the world’s majorrivers flow south; the St. John’s River is an exception. Flowing north, the St. John’s gently winds its way through northeastern Florida, roughly parallel to the Atlantic coast, until it angles east and meets the ocean just north of Jacksonville.

Marjorie Kinnan Rawlings, Florida’s esteemed authoress, spent time exploring the St. John’s River early in the last century. She and a friend traveled the river, camping along its banks, and Rawlings later described their adventures in her popular book Cross Creek. Rawlings wrote of the St. John’s with such tenderness, you’d think she was speaking of a beloved friend.

Even today, in our hectic world of technology and haste, time on the St. John’s still resembles the era when Rawlings spent time there.

“There’s not a lot of development on the St John’s, so it’s a nice place to vacation. You can get an idea of how Florida looked 100 years ago,” says Judy Armstrong, co-owner with husband Rick of Holly Bluff Marina.

One of the reasons for this step-back-in-time feeling is the fact that portions of the land bordering the river are national forest property and, as a result, cannot be developed. While the scenery changes as you serenely navigate the river at laid-back houseboat speeds of about 5mph, you’ll see statuesque oaks veiled in silvery Spanish moss, along with towering pines and palms. In some places, thick stands of palmetto appear to create an almost impenetrable buffer, but look closely and you’ll find they are teeming with wildlife.

Cypress trees, their knobby “knees” often visible above the quiet waters, contribute to the sense of “old Florida.” In addition to cypress swamps, you’ll see stretches of marshland in places along the St. John’s and its tributaries.

These natural settings are tranquil havens for wildlife, which makes spotting wild creatures a favorite happening along the river. Birds are found in abundance, ranging from stately great blue herons to the ubiquitous egrets ever in search of a meal. Along with these and other water birds, the skies above are home to numerous birds of prey, including magnificent eagles and ospreys.

“The wildlife is just beautiful. Occasionally, someone will even see a bear swimming across the river, and of course, there are manatees and alligators,” says Judy, adding that it’s not unusual to see deer crossing the river, as well.

You’ll lose count of the turtles and alligators sunning themselves on exposed logs and along the river banks. If you venture into Blue Springs State Park, a manatee protection area, you’ll see anywhere from a few manatees to large numbers, depending on the time of year.

“People come to town and think they just have to go to Disney World, but this is old Florida,” says B.B. McNerney. “It’s very relaxing.”

Andy and B.B. McNerney have owned St. John’s River Adventures Houseboat Rental Company in Georgetown since 2000, but they’ve been house boating themselves for decades. In fact, it was their love for being on the water that prompted them to buy the business when it became available.

Because the McNerneys enjoyed renting houseboats when their own children were young, they appreciate that many families find this the perfect vacation.

Not everyone who rents a houseboat feels like fishing, but if you do, you’ve definitely come to the right place. Bring your poles, and try your luck at catching catfish, perch and crappies, maybe even a bass.

Some boats come with slides—a favorite with kids of all ages.

“You get up on the top deck, throw a bucket of water on the slide and down you go,” says B.B. “You splash into the river at the back of the boat.”

If you feel like exploring, talk to the rental company ahead of time. They can arrange for kayaks so you can leave the houseboat and venture along the river.

“You can pull a boat up to 22-feet long behind the houseboat,” B.B. adds. “If you want to anchor in Silver Glen, you can take the smaller boat exploring in Salt Springs or Juniper Run; there are all kinds of cool places you can go see.”

The beauty of a houseboat vacation is that you don’t “have” to do anything, but you have plenty of options. Even if you choose to stay right on the boat, the scenery is always changing (providing you’re cruising). There’s also something spectacular about sunrise and sunset when you’re right on the water.

Many people compare piloting a houseboat to driving an RV, but there’s one major difference: In a houseboat, you’re moving less than 10mph. Still, if you’re nervous about playing boat captain, the rental companies are happy to help.

“We do an orientation, and we have an instructor who will work with you personally. He’ll take you out on the river and work with you until you feel comfortable driving the boat,” explains Judy.

“My son Michael is my captain, and he does our orientation. If people aren’t comfortable driving themselves, he’ll actually take them on the boat and get them anchored at Silver Glen spring,” says B.B.

Companies typically have a minimum of two days/one night rental, so ask about weekend, weekly and mid-week rentals. Fuel costs are in addition to the rental fee; expect to burn approximately five gallons of fuel per hour if you’re running the boat motors and generator.

A week-long houseboat vacation is the perfect antidote for the hectic pace of everyday life, according to Ken Lockhart of St. Augustine.

“My girlfriend Pam and I have rented a boat for a week every spring for five years in a row,” says Ken, a long-distance truck driver. “For us, it’s a pleasure week. I drive 3,000 miles every week, so this is just a real pleasant way to not work. It’s calm and quiet, and the St. John’s River is beautiful.”

“You see lots of herons, egrets, eagles and alligators. Often, we’ll see osprey flying by with fish in their talons,” Ken adds. “We love it. When we retire, we’re thinking of living on a houseboat; it really does fit our lifestyles very well.”