Raven Walters is on a mission. She’s determined to make the Knabstrupper, a rare Danish breed of horse, familiar to horse lovers throughout the United States.

“Most people in this country haven’t seen one or if they did, they had no idea what they were looking at,” Raven says, walking out into a pasture of her Ocala farm, LaRen Stud. At her call, the mares come galloping up in a thunder of hooves and a flash of spotted color, eagerly pushing their way in for a pet and a kind word. 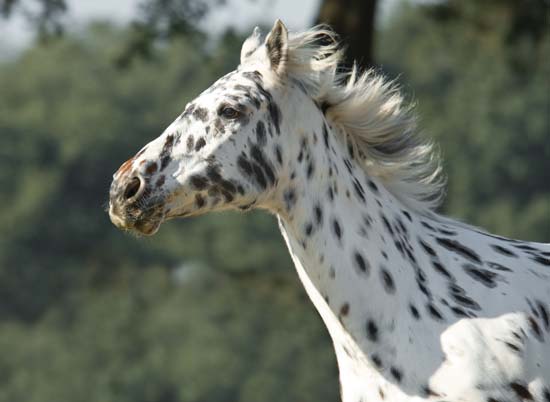 The Knabstrubber has the impressive size and build of a European warmblood,
with a kind and generous temperament and flashy, eye-catching color.

“This is a horse for the serious equestrian and the amateur rider,” Raven says, as she greets the mares fondly. “Knabstruppers get you that extra look in the show ring. They wear a dazzling coat, so they never get overlooked. They’re pretty, but they’re also sweet, versatile, intelligent, and bold.”

A Florida native, Raven was born in Fort Lauderdale and spent her early childhood in Ocala before the family relocated to Virginia. Horse crazy since she can remember, Raven was already riding and showing hunters when she was just in the first grade. She advanced to jumpers soon after.

“My mom got me interested in horses and made sure I had lessons. But my dad, who was a self-taught horseman, pushed me to accomplish more,” says Raven. “That got me out of dressage and into jumping at a young age. As I got older, I tried to quit horses and do college, but the horses were like a drug—I couldn’t get away from them.”

IT WAS HER FATHER, RICHARD WALTERS, who introduced Raven to the breed that has become her obsession. He became the proud owner of his first Knabstrupper in the early 1980s after his wife Roberta bought him the horse, who was a circus performer, as a birthday present.

Although she knows it will take time, Raven is determined to bring the Knabstrupper into the equine mainstream. To the uninitiated, the Knabstrupper might be mistaken for an Appaloosa, something that dismays Raven because the two breeds are vastly different. And unfortunately, there are Appaloosas being passed off as Knabstruppers by less-than-honest breeders. 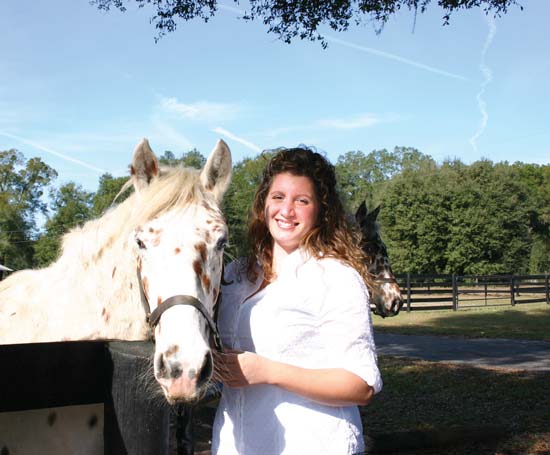 The Knabstrupper has the impressive size and build of a European warmblood, with a kind and generous temperament and flashy, eye-catching color. Like most warmbloods, they are slow developing and continue to grow until age six or seven, but are able to be ridden well into their twenties.

“They can compete at the highest levels in driving, dressage, eventing, and jumping, but they are also a horse that amateurs can enjoy,” Raven explains. “They’re steady, not flighty.”

ORIGINATING IN DENMARK, the Knabstrupper was bred exclusively for centuries as the horse of nobles and kings. Murals dating back to the 12th century depict three princes riding spotted horses. The bloodlines that created the Danish Knabstrupper can be traced to a black stallion named Superbe, who was bought by the Danish state stud in 1683 from a Spanish monastery.

As the mount and carriage horses of nobles, Knabstruppers were also used as officers’ horses in battle, but their colorful appearance made their riders easy targets for the enemy. Because of their good dispositions and eagerness to learn, Knabstruppers were often bought as circus horses, and post-World War II, the breed was exported to many different countries to perform in the entertainment world. With the decline of circuses, however, the colorful horses became rare. Today, there are said to be less than 1,000 purebred breeding stock in existence, and only a handful are in North America.

For someone searching for information on the breed, it’s easy to get confused because there are both Danish and German bloodlines, although the two countries are at odds as to the “true” Knabstrupper. The recognized mother organization for the Knabstrupper, the KNN, is located in Denmark. The German lines produce a smaller horse, which just adds to the controversy.

Determined to introduce American horse lovers to the real Knabstrupper, Raven has built a herd of imported horses carefully selected from the best Danish bloodlines. With this in mind, she moved back to Ocala in August 2007, and has established LaRen Stud, a 40-acre farm on 475A, specifically for breeding and promoting the unusual breed.

“I came to Ocala because there’s no place in America where they’ll get the exposure they will here,” Raven notes. “I plan on doing this big.”

“As people start to see success in the U.K., they understand there’s a much broader market in the U.S.,” agrees Tom Warriner, chairman of the board of the Ocala/Marion County Chamber of Commerce. “As Marion County becomes more identified as a ‘sporting horse capital of the world,’ I think you’ll see more people bringing breeds here that are of a European foundation.”

Warriner is familiar with the Knabstrupper and notes that the interest in European breeds is growing.

“We have all the economic pieces of the puzzle people need to develop an equine business,” he explains. “Marion County is a launching pad for all things equine.” 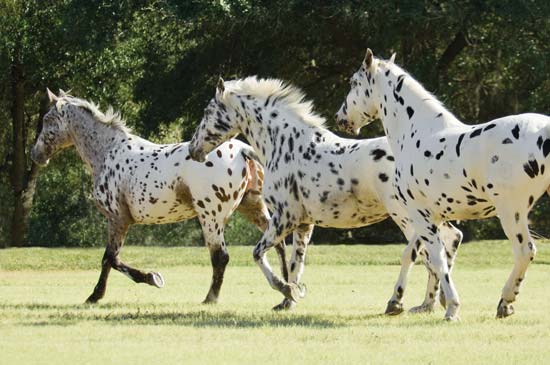