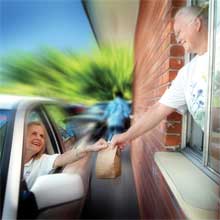 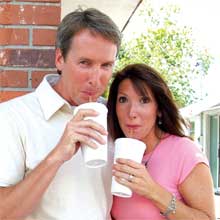 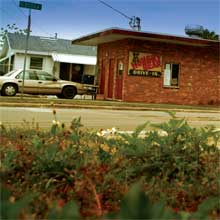 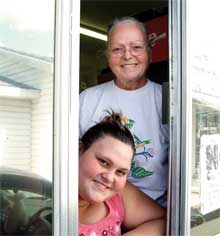 For many Ocalans, the non-descript building with its flat roof and aged sign is a savory respite from the pressures of the day, a perfect mid-afternoon break. For others, the sparsely adorned building has become a place of personal connection where, like Cheers, everybody knows your name. But for all who come to this place with purpose — and an empty stomach — there is a common bond of affection for this humble downtown landmark.

The restaurant that offers the Papa, Mama, and Baby Bear burgers has attracted a loyal following since 1974, when Larry Mahew, Sr. and Lennie Falcone opened its doors for the very first time. Now owned by the drive-thru’s original grill cook, Gladys Bates, it has remained popular among locals, many of whom gladly admit they frequent the Hungry Bear several times a week. The lure of freshly cooked, thick-and-juicy burgers and old-fashioned milkshakes is just too good to resist.

For native Ocalan Rebecca Rogers, this is a welcome obsession.

“The Hungry Bear is my weakness,” says Rebecca, “I go there at least four times a week for their sweet tea and do not seek treatment for this addiction.”

Rebecca says her family has come to accept her affinity for the drive-thru while discovering their own Hungry Bear cravings. Sons Brennan and Ryan opt for the chili dog and peanut butter milkshake, respectively, while daughter Kinley has a thing for the salted crinkly French fries. Even husband Steve, a judge for the 5th Circuit Court, has discovered the virtues of homemade sweet tea with extra crunchy ice.

“I knew this was a love that would last when I gave up my Hungry Bear sweet tea to my husband to take back to work one day,” laughs Rebecca.

Julie Moody, a teacher at Osceola Middle School, can relate to Rebecca’s passion for The Bear. She even has a running tab and pays weekly for her half-sweet, half-unsweet large tea.

(Author’s Disclaimer: Through the good fortune of relations, I, too, have my own account thanks to above said subject and author’s sister. For the sake of accuracy, I do not, however, order my sister’s unique combination of tea. I’m a cherry-Coke-double-ice-and-corn-nugget kind of girl.)

But it’s not just about the tea. It’s about the grilled cheese sandwich with hot cheddar cheese spilling out of the toasted bread. Or maybe it’s about the Mama Bear, a juicy, cooked-to-order double burger on a soft bun with tomatoes, lettuce, pickles, and onions smothered in warm mayonnaise. (Attention all cardiologists: please look away.) Then again, there are the bite-sized corn nuggets sending many a customer into a frenzy to get there before the lunchtime crowd hits, creating bumper to bumper congestion all the way to City Hall.

Julie also suggests the Hungry Bear’s allure is as much about the people who work there, too.

“They are the most gracious, friendly, and hardworking people I’ve ever met,” says Julie, noting that Hungry Bear employees work day in and day out in the cramped, non-air-conditioned building 12 hot Florida months a year.

Marvin Shives of the nearby Marion Details shop agrees.

“They make my day when I see them,” says Marvin, who adds that the Hungry Bear workers got him through a rough patch when he lost his mother. In return, he surprises them with thoughtful treats, most recently bringing them chocolates on Valentine’s Day. And it doesn’t hurt that he’s hooked on the Hungry Bear ice.

“They have the best shaved ice in town,” Marvin continues. “Sometimes, I’ll just stop by for some ice and cherry syrup and make a snow cone.”

Linda Williams has worked at the Hungry Bear for 10 years, coming in on her days off from her full time job at a local manufacturer. Her daughter, Danielle, is part of the drive-in family, too, and there’s seldom a car Danielle doesn’t recognize. She can call an order based on just a fender.

“If I see a few cars lined up, I’ll go on and get the orders in since I already know what they want,” Danielle adds.

Larry Mahew, Jr. said his father knew this would be a success in spite of naysayers who said a downtown burger joint wouldn’t last.

“If you’ve got good service and good food,” he offers, “people will come.”

This down-home service has added to the attraction of the Hungry Bear, creating an iconic stature for the restaurant that boasts of one picnic table for walk-ups. (Bear translation: customers who walk up to the window to place their order.)

“This is a landmark for downtown Ocala,” he says. “Many times I’ll give directions to City Hall by telling folks, ‘It’s just down the road from the Hungry Bear,’ and then they instantly know where to go.”

Hungry Bear fans shudder to think about a day without the popular drive-thru which has served many a fry and friend.

Kinley Rogers broached the unthinkable to her mother one day.

“Mama,” she asked, “what would you do if the Hungry Bear ever closes?”

“I told her not to speak of such foolishness,” replied a wistful Rebecca Rogers.

The Hungry Bear is located at 420 S.E. Osceola Avenue in Ocala and is open Mondays through Fridays, 11am to 4:30pm. Please do not attempt to charge your bill to the author’s Hungry Bear Preferred Customer Account. She maxes it out by each Wednesday.