Looking at our society, it’s hard to believe there was a time when marriage was considered a sacred institution expected to last a lifetime.

Today, we idolize celebrities who seem to change marriages almost as frequently as they change outfits. We’ve accepted the sad fact that nearly half of all marriages end in divorce. Here in Florida, we have some of the most lenient divorce laws in the United States.

While Nevada has the highest divorce rates, according to the National Vital Statistics Report and 2009 data collected by the U.S. Census Bureau, Florida ranks No. 8 and has 11 of the country’s top 50 cities with the highest rates. Don’t move to Panama City unless your marriage is rock solid; almost 16 percent of the population there is divorced, giving that city the nation’s highest per capita divorce rate.

Yet, some couples have beaten the odds and not only have a long-term marriage but a genuinely happy one. To find out what makes these relationships last, we visited with two area couples. 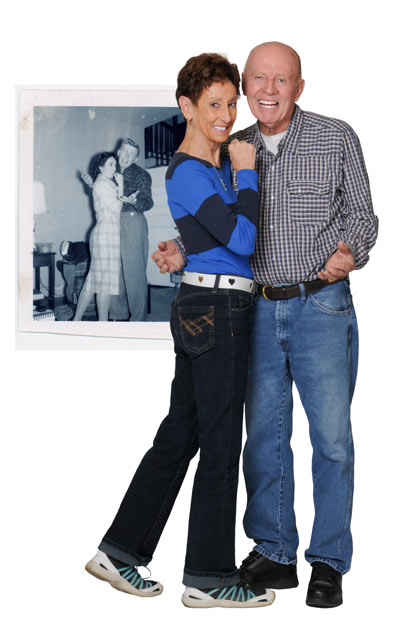 “I’ll always remember when Lynn and her twin sister, Gwen, came to our high school in Pennington, New Jersey,” says Bert, 74, “because they were the ‘wild and crazy girls’ from New York.”

Lynn, 72, clearly recalls the first night she and Bert “officially” met, but it’s questionable who was really wild and crazy, as Bert and a buddy caught her attention on Tic Tac night (the night before Halloween) by throwing rotten eggs at Lynn, Gwen and their friend, Francine.

Shortly thereafter, Bert left for the Army Reserves and was gone for six months.

When he returned to New Jersey, he found a job working on a cattle farm. One night he and a friend attended a sock hop featuring Dick Clark and American Bandstand in Lambertville, New Jersey. Lynn and Gwen happened to be there. Bert danced with Lynn, who was a high school junior at the time, and before the night was over, he got her number.

“I knew I really liked one of those twins, but when I called and asked for Lynn, I didn’t know which one I was getting because I couldn’t tell their voices apart,” Bert chuckles.

Three years later they married and today are the proud parents of four children—Shari, Kim, Bret and Kelly—and six grandkids, ranging in age from 23 to 10: Gavin, Dawson, Kray, Sydney, Kade and Abby. They feel blessed that all their family lives in the Marion County area and are able to get together frequently.

Both are retired from their professional careers—Lynn as an elementary school teacher and Bert as a farm manager—but remain extremely busy. Bert stays active with his own cattle and hay operation and does farm consulting work. Lynn is an avid quilter, crafter and reader who performs with her church’s bell group. Together, they sing in the choir and are active in church functions. They walk regularly, work in their yard and blueberry patch, and go out to eat with friends.

These days together are especially sweet because for so many years, the demands of Bert’s job limited his time at home.

“I loved my work managing farms, but I missed out on a lot of stuff with my kids and family because of the long hours and having to travel a lot,” he reflects.

“At one point, he had to leave home about 4:30 in the morning because he was driving 50 miles one way to work. He wasn’t home until after dark six, sometimes seven, days a week,” says Lynn, remembering one of the toughest periods they experienced. “I had four kids at home, and he was always gone. After about seven months, I finally sat him down and said, ‘You have to get another job or something because this is not going to work.’”

Shortly after that, Bert took a job in Florida, and the Mickel family moved to High Springs, then eventually to the Ocala area.

“I remember that first Christmas in Florida,” says Bert. “It was 75 degrees, and the kids were missing snow and their cousins in New Jersey. We were sitting in our yard in the sunshine, and I said, ‘Isn’t this nice?’ and they all started crying.”

“That brought us even closer together though,” says Lynn. “When we moved to Florida, we had just our family, but God was in the middle of it, and we grew in our relationship with each other. There was never a time we thought we wouldn’t make it.”

What do they see as the key to a long, happy marriage?

“It takes a lot of faith in each other and respect,” says Bert. “It also takes commitment, but if only one person’s committed, it doesn’t work. It takes both people.”

“You need respect and love for each other but also for God and your family,” adds Lynn. “You need commitment. I knew when I got married, it was going to be forever.”

The Mickels emphasize that both partners should complement each other when it comes to strengths and weaknesses.

“I used to be all emotional about things, and Bert would always tell me, ‘Don’t worry, everything’s going to be OK,’” says Lynn. “He always takes care of things, and he never gets upset, even back when he taught me to drive a stick shift and I ran the car into the side of the barn.” 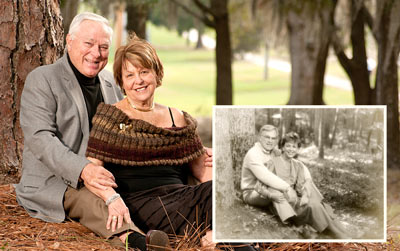 Sweeter the Second Time Around

Jerry and Teddie, both 73, grew up in Ocala; as children, they were next door neighbors and both attended Ocala High School, graduating in 1957. They never dated as teens, however, and married other people.

In the early 1980s, Teddie found herself in a position she never anticipated: widowed and working three part-time jobs to support herself and her two teenage daughters, Cammie and Cindy. One of those jobs was at a dress shop in The Cascades shopping center. When Jerry Gause came in one day before Christmas to buy a blouse for his mother, Teddie had no trouble remembering the boy-next-door who’d matured into a handsome man and who also happened to be divorced. She’d already noticed him earlier that year when she and her sister were having lunch and Jerry walked in.

“He’s sharp; you should get a date with him,” her sister said at the time.

When Jerry offered her a job in his family’s jewelry store the day he came shopping for his mother, Teddie realized it was an offer she should take seriously. Soon, she was working for him part time.

“We’d gone out for coffee, but our first big date was the U.S. Open in San Francisco in 1981,” recalls Teddie. “It was so romantic. If you can’t fall in love in San Francisco, where can you?”

Within two years, they were married. Both say there’s nothing they would do differently if they had the chance. Perhaps part of the reason is that they married in their 40s and had already learned a great deal from their first marriages and life in general.

Teddie’s daughters now have children of their own, giving the Gauses four grandchildren: Bobbie, Kevin, Amanda and Tyler. Their youngest daughter, Cammie McLeod, also works in their business.

Jerry and Teddie enjoy golf, tennis, boating, working out and dancing. They make a point to stay in shape because, even though looks certainly aren’t everything, they feel it’s important to stay attractive and healthy for each other.

Not every marriage would thrive if husband and wife spent so much time together, but for this couple, working together is icing on the cake. Their type A personalities mesh together seamlessly, and they find that work adds meaning to their lives.

So what makes a marriage succeed over the long haul?

“Jerry is such a gentleman, and I respect him,” says Teddie. “That respect has always got to be there, and it’s also important to have the same core values.”

“You have to be friends first and to like being around each other,” says Jerry. “I think the reason so many marriages fail is lack of communication and financial burdens but also because so many people never become best friends.”

“So many of us, particularly when we’re younger, expect the moon over Miami and white picket fences when we get married, which is not reality,” he observes. “I think with second marriages you are more realistic. I wanted a great friend who would blend with me and go through life with me. Teddie makes life interesting, so it’s never dull. We’ve had the same goals. She’s always been very encouraging in our business ventures, and that makes it exciting for both of us.”

“The good thing about second marriages and getting married older is that you know what you like and dislike more than when you get married at 21,” adds Teddie.

“We have date nights on Thursday nights and still create a lot of time for each other.

People ask if we get tired of each other, but that’s never happened and we’ve worked together for 33 years. So many people can’t relate to each other’s work. Maybe it helps that our work is often based around happy people getting married! Recently, we had a 92-year-old man come in with his girlfriend who is in her 80s and they were so in love.”

“I think marriage is better as you get older. You get to know your partner’s idiosyncrasies,” adds Jerry. “I like Teddie more now than when I met her.”

“These couples support, respect and trust one another. They’ve made it; they’re the experts!” says Nancy Storch, LMFT, (licensed marriage and family therapist) of Storch & Associates, PA, in Ocala, who has been practicing since 1992.

Storch says having common core values is crucial for a lasting marriage.

“Core values vary from couple to couple, and some are non-negotiable. You have to know what qualities you want in a partner, and you can’t go into a marriage expecting your partner to change a core value.”

Many couples choose to “try marriage” by living together, but Storch says this isn’t necessarily wise.

“Courtship tells it all. That spark in courtship is what you want to carry throughout a marriage, but most people are too much in a hurry to take a couple years to really get to know someone,” she notes. “Many couples move in together just to have a better lifestyle financially. Dating someone and seeing them every day would be better than moving in and being financially connected with someone you may not even want to talk to in six months. If you love someone and take time to learn about each other, you’ll have a stronger basis for the relationship.”

Her recommendation for a successful marriage?

“You need friendship with a partner who has the same core values and similar beliefs. Practice communication—not just talking—but listening and coming back together and developing a plan,” advises Storch. “And no matter how busy you are, make it a priority to have time together just as a couple.”