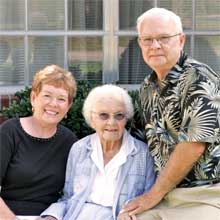 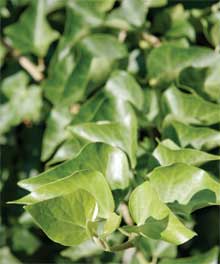 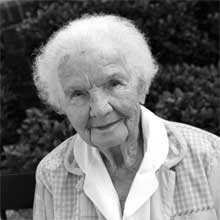 Harold and Gwen DeVane were married on November 28, 1963. Along with her Bible, Gwen carried a small clipping of an English Ivy plant. Four decades later, that ivy plant lives on and has made an appearance at every DeVane family wedding since.

At 91-years-old Algie DeVane is remarkably energetic and youthful. As a matter of fact, she still works, doing all of the clippings for the family’s plant business, Kingswood Nursery.

“Granny makes all of our clippings,” Harold says. “I’d say over the years that she’s rooted half of the plants in Ocala.”

Algie smiles with this acknowledgment.

“It’s a wonderful pleasure to be able to drive down the street and see all of the blooming flowers and think, I did that. The nursery and my plants are my life and I don’t know what I would do without them.”

Of course with plants playing such an important role in the DeVane family’s background, it should come as no surprise that 43 years ago, Algie had the insight after her son’s wedding to begin a new family tradition that involved — what else — plants!

“After Harold and Gwen’s wedding, I took the ivy and placed it in a glass of water,” Algie says. “It quickly rooted and I transferred it to my yard. She admits she had no idea how her little idea would turn into a beloved family tradition.

According to Harold, there’s a special saying about ivy.

“The first year it sleeps,” he says “the second year it creeps, and the third year it leaps. Basically, ivy is a little slow to get started, but once it gets going it really takes off.

And did it ever. Since that first wedding in 1963, the DeVane ivy has been in many family weddings.

“This really is a very special tradition,” Cindy says. “I grew up knowing there was this ivy from my parent’s wedding and I knew early on that I would use it in my wedding. It was a great way to acknowledge and feel close to my parents. As a matter of fact, Cindy’s young daughters, Lauren, seven, and Alexandra, four, are already aware of the ivy plant they’ll use in their weddings, too.

“We thought little Lexy had it all figured out,” Harold says. “Last year, she just knew she was going to marry Grant from the coffee shop.”

Of course Lexy realized she was too young to be making such a rash decision and is keeping her options open. But when her daughters are ready to settle down and get married, Cindy is ready for them. A portion of the ivy used in her bouquet was rooted and is growing beautifully in her Gainesville garden.

“It will be really special to pass this tradition on to my girls because it’s something that ties them back to their grandparents and great grandmother,” Cindy says.

“It means so much to me that everyone appreciates and wants to take part in this tradition,” Algie says. “You know, I’m really not sure how many weddings this ivy has been in, but it’s a wonderful tradition that I know my family will keep alive.”