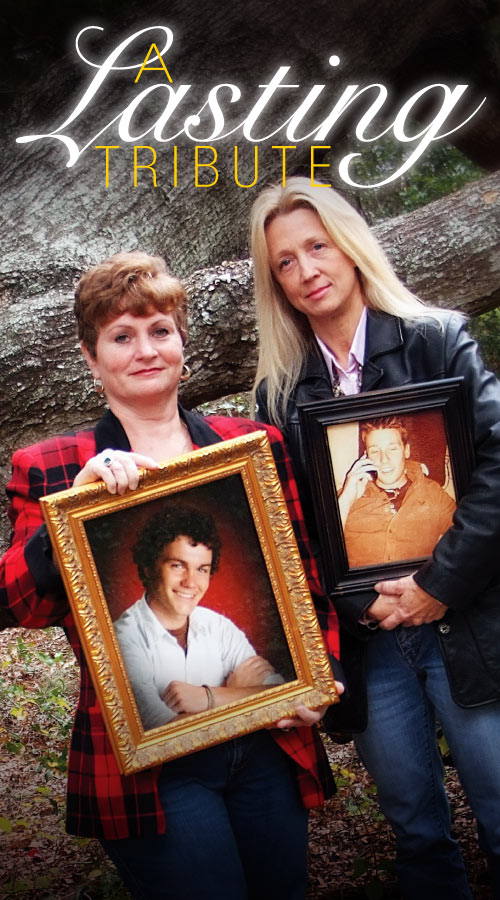 Ocala moms Sharon Lindsey (left) and Holly Sadler are turning their grief over the deaths of their sons into a beautiful memorial park for reflection and solace.

If Kyle Sadler and Devon Hime had ever met, their moms agree they would have been fast friends. Kind, funny, and gregarious, both Ocala boys were full of life. Holly Sadler’s son Kyle loved to make people laugh, especially with his Arnold Schwarzenegger impersonation, and Sharon Lindsey says her son Devon never met a stranger.

And above all, they loved their mothers.

“I can’t describe to you how close we were,” says Sharon. “We had such a loving, sweet relationship. Not a day went by that I didn’t say, ‘Devon, I’m glad you’re my son.’”

James Devon Hime was just 19 years old when he died in the Jumbolair accident on January 26, 2008. Just a few months later, on May 10, 2008, 21-year-old Kyle also passed away in a car accident in Ocala. Now Holly and Sharon are on a mission to remember their sons in a positive and enduring way—by creating a peaceful reflection park in town dedicated to local parents who have lost a child. Sharon first contacted Holly after reading a Star-Banner article in which she commented on creating a memorial park.

“It took me about 12 phone calls, but I finally got a hold of her and we talked about the dream,” Sharon recalls. “I told her, ‘Holly, this is not just a dream. We’re going to make it a reality.’”

They formed the non-profit organization M.O.M.S. (Memories of Missing Smiles) in November and partnered with Ted Adams, executive vice president of the Ocala construction company Moss & Associates, to locate a site, draw up plans for the park, navigate local ordinances, and prepare for an official presentation before the city council.

“Ted has spearheaded the entire thing,” Sharon says. “Calling him was one of the smartest things I could’ve ever done.”

“It’s nice to be reminded that there are still wonderful people in this world, and he’s one of them,” Holly agrees. “He’s not looking for anything in return. He’s just there because it’s in his heart.”

Many other local professionals have offered their time and expertise pro bono for the project as well, including local attorney Bill Futch, civil engineer Joe London, CPA Russell Lindsay, and developer Steven Counts Inc. The site Holly and Sharon settled on for the park is an unused five-acre portion of Jervey Gantt Park on Southeast 36th Avenue. Once developed, the land will be a serene nature park with winding foot paths, beautiful water features, and benches throughout.

Parents and even friends of local children who have died will be able to purchase engraved plaques, pavers, statues, and other memorial items to honor their loved ones. The park will be non-denominational, and memorials will range in price from $20 to $40,000. The women hope anyone who is grieving will visit the park for quiet reflection.

“Our jobs as parents didn’t end when the boys died,” Holly says of their dedication to the project. “I think it’s part of our responsibility to continue for them. I hope that parents feel a sense of community when they’re there, to know that the community thought enough of their children to create this park.”

The project’s costs will be paid entirely with both monetary and in-kind donations—not public funds—and although both moms eschew any praise for their work, they smile to think of what their sons would say about their efforts.

“I think Devon would give me a thumbs-up and say, ‘Way to go, Mom!’” Sharon says.

“Kyle would probably say, ‘Oh, Mom, you’re crazy,”’ Holly adds with a smile. “But then he’d be telling his friends on the side, ‘Look what my mom’s doing.’”

Standing side by side at a city council meeting late last month, the two moms—their bond forged in a way that only parents who have lost a child can truly understand—made their case for the park. The council’s decision was swift and unanimous: Ocala needs a dedicated park for parents of lost children. Applause erupted from the many supporters and friends in attendance at the old Marion Theatre, and with tears in their eyes, Holly and Sharon embraced.

“It’s just a wonderful way,” Sharon said, “to turn our grieving into something so positive.”

Monetary donations to M.O.M.S. will be accepted at any local Regions Bank. The memorial park’s public groundbreaking will be held January 26 at 12pm. Lunch immediately follows, with proceeds benefiting M.O.M.S.