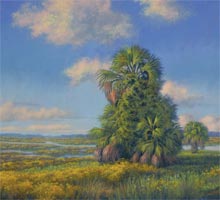 For someone who didn’t pick up a paintbrush until her late 30’s, Jackie has accomplished what so many who have been painting for a lifetime have been unable to — the opportunity to make her art her life’s work.

“I was always a creative person with crafts and the like,” Jackie says. “But I had never painted. I just had an appreciation for art.”

While Jackie may never have had any formal art training, she did have the opportunity to train under one of Florida’s most honored and respected artists, the late A.E. “Bean” Backus. For ten years Jackie painted alongside Bean in his Fort Pierce studio.

Several of the best-selling artists in Florida, a group of African-American painters that became known as The Highwaymen, also got their initial inspiration from Bean’s style of painting Florida landscapes.

“Alfred Hayer, one of the original Highwaymen, observed Bean at work in his studio,” Jackie says. “Alfred obviously had a knack for painting and he took what he saw from Bean and began creating his own works.”

Jackie believes most of The Highwaymen learned their craft from Hayer.

Bean, who passed away in 1990 with Jackie at his side, was inducted into the Florida Artists Hall of Fame in 1993 and at the time of his death, all of his paintings were pre-sold.

“Bean had an open studio in South Florida where both he and I lived,” Jackie explained. “He had an open-door policy and welcomed me with open arms. I would just go and watch and then one day he told me to paint. I told him I didn’t know how.”

After several visits, Bean finally generated a list of art supplies Jackie would need to begin painting. “I threw caution to the wind and went for it,” she says.

“There was never any formal training,” Jackie continues. “I more or less watched over his shoulder and attempted to copy his paintings and techniques.”

Jackie has plenty of fond stories about her mentor, but there’s one that still makes her smile.

“There was an instance when Bean was working on a scene that included a deer,” she says “and I just couldn’t get my deer to look right. I finally interrupted him and asked him why my deer looked like a dog. He put his arm around me and said ‘It’s ok honey, my deer looks like a dog.’ Well, that was good enough for me!”

Jackie copied and studied Bean’s works for nearly two years before he said it was time for her to sell one of her paintings. She took his advice to heart and sold her first painting for $25.

“From that moment on I was hooked,” Jackie says. “I just loved painting so much that I couldn’t imagine doing anything else with my life.”

Today, Jackie has a large following and her oil paintings sell for anywhere between $125 and $4,000.

Making art your life’s work isn’t as carefree as it seems. Jackie and her husband, Harry, travel to between 15 and 18 weekend art shows each year — from Florida’s panhandle to Miami. Her work has also been displayed at FAFO for the last eight years and she says she tries to display locally as often as possible.

Jackie is listed with the Florida Artists Registry and the state has purchased three of her paintings.

“My work has been on display at the Florida State Capitol building, then at the State Supreme Court rotunda, and now, beginning March 1, several of my pieces will be hanging in the governor’s office gallery.

“It’s a great honor to have my work displayed with the state,” Jackie continues. “I don’t talk politics with people and it doesn’t matter to me whether it’s a Democratic or Republican office. All that matters is that it’s the governor’s office of my home state. I deem that quite an accomplishment.”

Through the years, Jackie continues to develop her own painting techniques, while keeping the valuable lessons she learned with Bean at the forefront of her mind.

Jackie enjoys working in her home studio that was built by her husband but, at the same time, loves spending time in nature. Spending anywhere between two and five hours a day in her studio, surrounded by the smells of paints and thinners, Jackie relishes in the time she’s able to spend outdoors.

“I believe if you’re a landscape artist, you need to get out there and experience nature firsthand,” she says. “I do all of my work after first viewing it in person. I also do as many open-air paintings as possible.

“Being on a site myself means a world of difference for me when I actually begin the painting process,” Jackie continues. “I bring my feelings and my memories back to the studio with me.”

Wherever Jackie goes, her trusty 35mm Nikon camera goes, too. Her travels are well documented and she has boxes and boxes of filed photographs. The photos are a wonderful reference when painting various trees and flowers — especially those that are still a challenge for Jackie.

“Pine trees are difficult,” she says. “But the hardest is Cypress. I always end up making the trees too dark and full. I make it a point to mix plenty of sky colors when I’m preparing my paints because I know I’ll inevitably end up lightening the trees.”

While the photographs serve as an accurate reference for Jackie, she reserves the right to alter her scenes by adding or taking away elements. She also doesn’t use the photos to determine colors. Instead, Jackie chooses her paint colors based on what she sees in her mind.

A very open-minded person, Jackie continues to learn and develop her craft with each and every painting.

“Having started so late in life, I feel like I’m always playing catch up,” she says. “Even after all these years, there’s still a lot to learn.”

Even after achieving great success in her career, Jackie is still humble.

“I don’t believe I’m a truly gifted artist,” she says. “Instead, I think I have a knack for what I do.”