With a distinguished 45-year career in public service to his credit, David Ellspermann is now in the homestretch of his 24th and final year as the Clerk of the Circuit Court and Comptroller of Marion County. He shares his story and the wisdom he has gathered over four decades with us in this exclusive interview.

David Ellspermann wasn’t born in Ocala, but he might as well have been, as he has earned the honor of being regarded as one of Ocala’s favorite sons. Thanks to his uncle, Bonnie Heath, the Ellspermann family moved from Stillwater, Oklahoma to Ocala when David was just 2 years old. Heath, along with Jack Dudley, co-owned Needles, who  became the first Florida-bred horse to win the Kentucky Derby in 1956. Following Needles’ success, Heath moved from Oklahoma to Ocala to establish Bonnie Heath Farm. Ellspermann’s father Vincent became the farm’s accountant and manager. 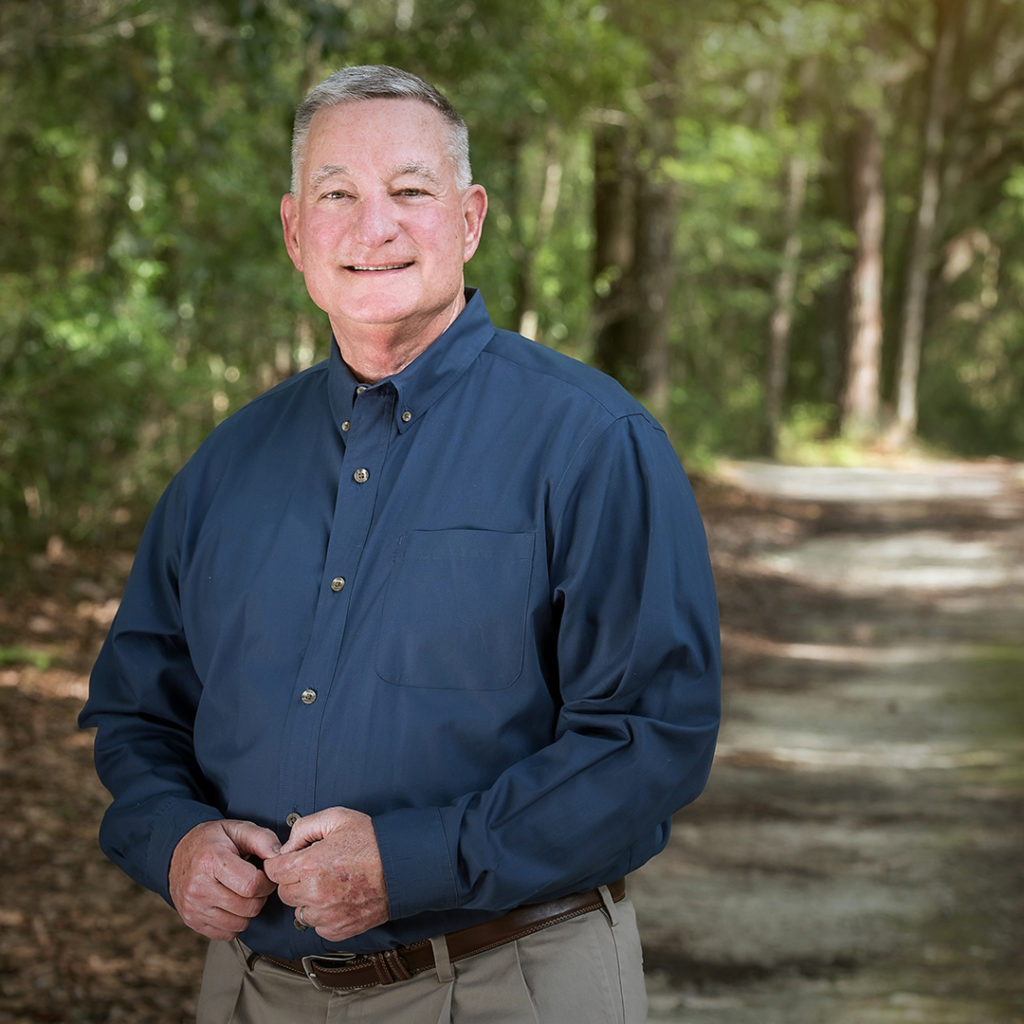 “When we were growing up, my three older brothers and I would spend weekends and summers working at Bonnie Heath Farm,” recalls Ellspermann. “One of my first jobs was to pick up the rocks on the racehorse training track shared by Bonnie Heath Farm and Tartan Farms. I also pulled weeds in the pastures and painted fences.”

‘You could say that clearing those rocks and pulling those weeds helped him chart a sound path to future success. But it wasn’t all work back then for the Ellspermann boys at the farm.

“We kept several family riding horses at the farm and once our chores were done, we could ride,” he recalls. “We’d ride on a country road that is now State Road 200, to a little convenience store to get ice cream. We also rode over to Ocala Stud. At the time, they had a clubhouse and pool there. We’d swim and they’d even feed us.”

Heath also owned the Ramada Inn in Ocala and, while attending Vanguard High School, Ellspermann worked at the hotel.

“We were taught to work at an early age,” he offers. “I grew up watching my father working through the night with stacks of papers in front of him. A good work ethic was instilled in me very early on and it has served me well.” 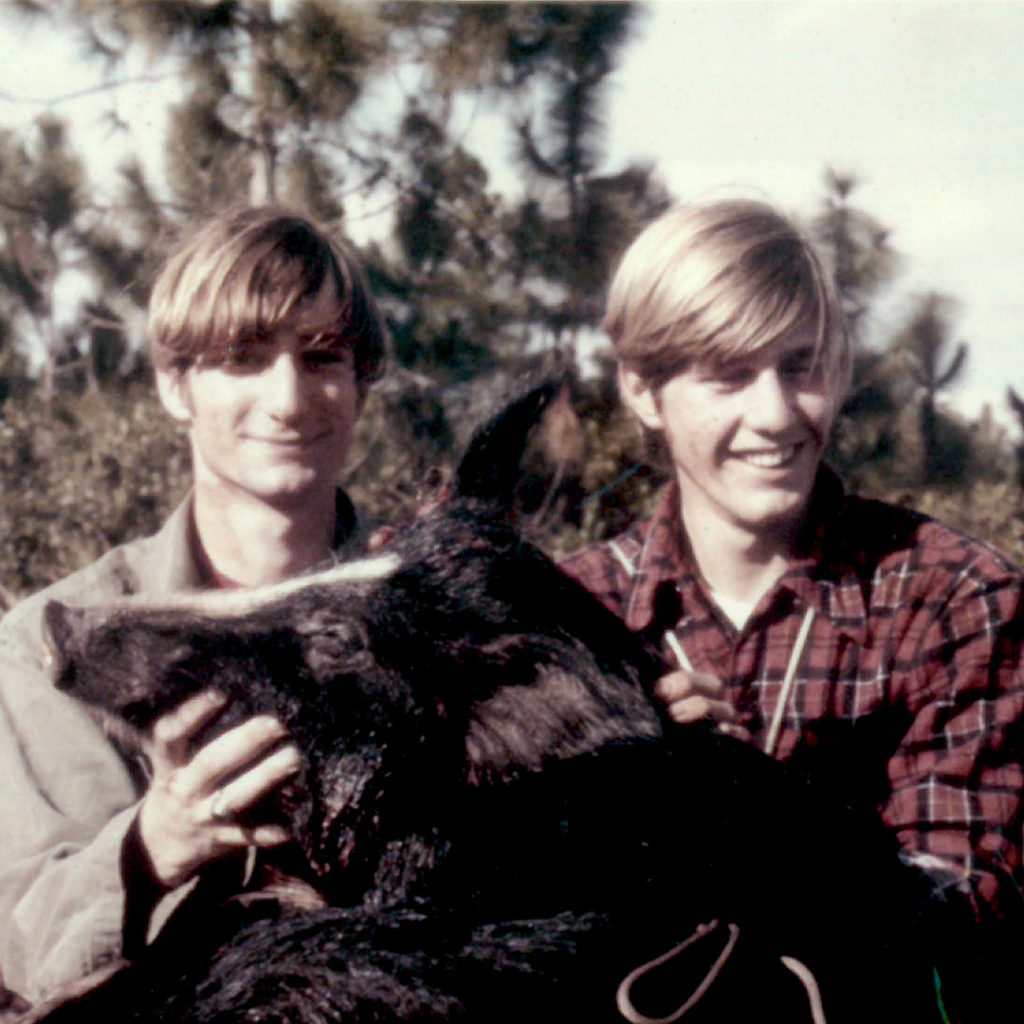 In his senior year of high school, Ellspermann and his family went to visit his older brother Lenny, who was playing defensive lineman for the University of Georgia (UGA) Bulldogs. The visit led Ellspermann to acquire one of the key “nuggets” of wisdom, as he calls them, that have served him throughout his career.

“We were allowed to go into the locker room and hear Coach Vince Dooley speak to the players,” remembers Ellspermann, who played football at Vanguard High School. “I was so taken with how Coach Dooley spoke with such respect, inspiring his players to be not only good football players, but good young men. Looking back, I realize that’s when I picked up my first nugget: respect people and inspire them to be their best selves.”

Dooley also took notice of the younger Ellspermann, who knew he wasn’t college football material, and offered him a scholarship to be the UGA Bulldogs football team manager.

“I was very honored that Coach Dooley made that scholarship possible,” he shares. “That was my first job in management and the experience taught me how to deal with people in a system.”

While he’s not sure where it came from, Ellspermann had always had an interest in law enforcement, particularly the FBI. He even applied and was told to get either an accounting or law degree.

“Of course, coming from a family of accountants, getting an accounting degree was a given,” Ellspermann asserts. “And while in college, I joined the University of Georgia Police Department. So at 20, in 1974, I was a sworn deputy. I worked patrol and investigations until I graduated in 1977 with a bachelor’s of Business Administration-Accounting.”

It was also while at UGA that Ellspermann met his soon-to-be wife, Jayne, who was in the university’s cadet police training program.

“As part of the program, cadets would do ride-alongs with deputies,” he explains. “I wasn’t scheduled for a ride-along that night, but the minute I walked in and saw Jayne, I tried to switch with another deputy. I wasn’t successful, but Jayne and I met a few days later at the Catholic student center. And that was it. We’ve been married 43 years this July.”

The FBI position never materialized and, after college graduation, Ellspermann returned to Ocala. He worked as a patrol officer and investigator for the Ocala Police Department (OPD) from 1977 to 1980.

“My years as an OPD officer were very rewarding years,” he says, revealing more wisdom he collected through his tenure there. “That experience gave me an incredible sense of how to quickly evaluate situations and respond appropriately. It’s something I continue to use to this day.”

“I was very fortunate to be offered those positions. They challenged me and allowed me to utilize my accounting degree, management skills and my law enforcement experience to make the whole system work better,” Ellspermann recalls. “From my time at Driver Improvement, which was managing DUI schools and, of course, DUIs are about substance [abuse], I learned not to judge those with that issue,” he says quietly, reflecting on another valuable lesson. “While with the State Attorney’s office, Brad King showed me how important it is that the court system works for the good of everyone.” 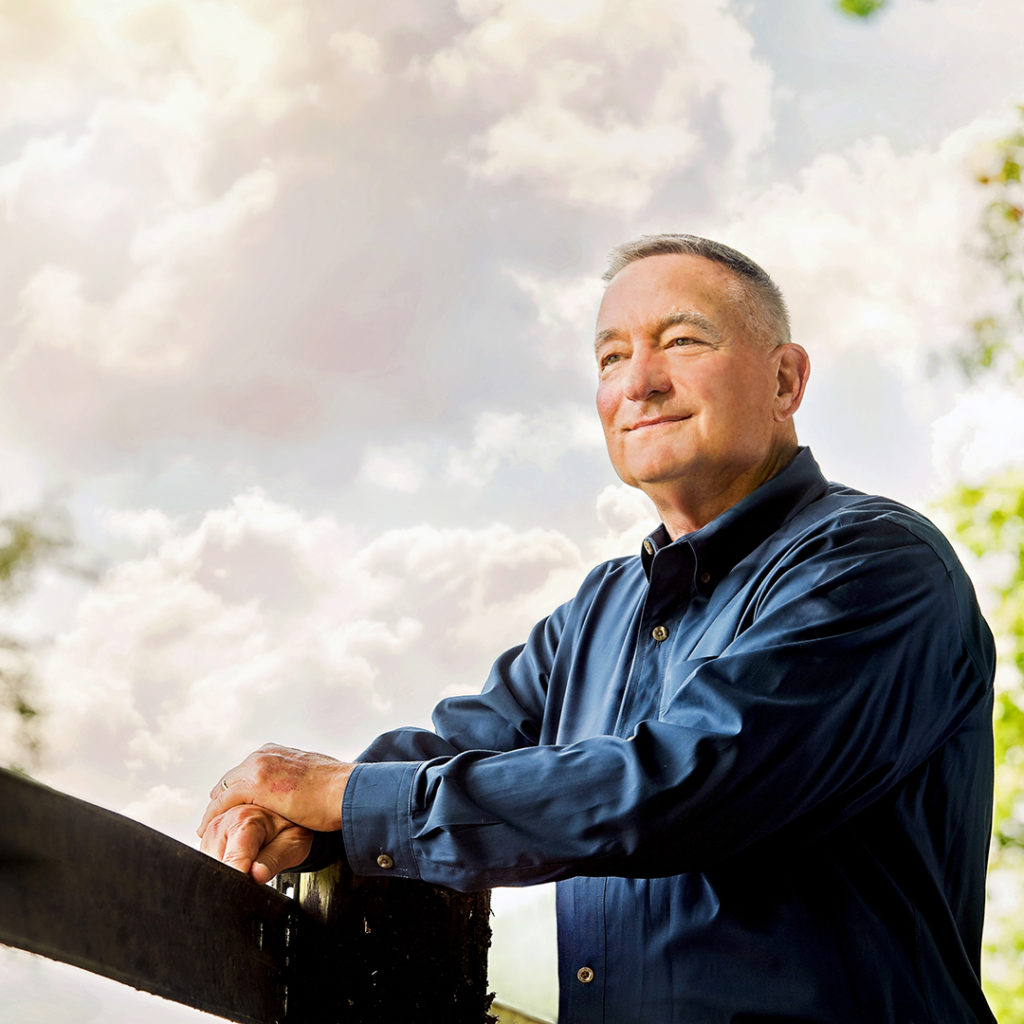 Ellspermann, now armed with his treasure chest of life lessons and collected wisdom, was elected to his first term as Clerk of the Circuit Court and Comptroller of Marion County in 1996 and officially took office on January 6th, 1997. When he retires on January 4th, 2021, he will have served six terms in the position.

Sheriff Billy Woods praises Ellspermann as “the best county clerk in the state,” and he was, in fact, honored as Clerk of the Year by the Florida Clerks and Comptrollers Association in 2006, 2009 and 2012.

Ask Ellspermann to describe the title he has held for more than two decades and he gives a Civics 101 answer, saying, “I was elected by the people of Marion County to protect the public trust, to maintain the constitutional doctrine of checks and balances at the local level.”

But here’s a little more meat on the bone to understand the scope of the office. The Clerk of Court is responsible for maintaining all court records; issuing jury summons, distributing fees to jurors, collecting and distributing court-assessed payments (fines, court costs, child support and statutory service charges); issuing marriage licenses and processing passport applications.

The Clerk serves as the county’s chief financial officer and internal auditor, ensuring that taxpayer money is handled according to the law.

The Clerk also functions as the budget officer, recorder and Ex-Officio Clerk to the Board of County Commissioners.

“I always liked to look at my office as the center of a bicycle wheel with all those I work with being the spokes that make the wheel turn,” admits Ellspermann, his analogy tracing to being first a serious trail biker then an avid road biker. “We have to work together to make the bike go, to make the entire system work.”

Under Ellspermann’s guidance, the Clerk’s office accomplishments would require a feature film length PowerPoint presentation to fully illustrate. However, the significant highlights would have to include being the first clerk’s office in Florida to digitize all county records. When that occurred in 1999, Ellspermann’s office was also the first in the state to redact personal information from public records, protecting individual privacy rights. Ellspermann was also instrumental in establishing the first Domestic Violence Division within the county’s court system.

Bring up any of these achievements and he is quick to share the credit.

“I call it a circle of success. To lead you have to help others succeed,” he offers thoughtfully. “And then that success circles around to others and back to you.”

“The blame game is a negative way to live and lead,” he asserts. “If you allow people a chance to find solutions, the outcomes are much more productive and will spread in a positive, successful way.”

In addition to his professional accomplishments, Ellspermann has served on dozens of community organization boards, volunteering his time and knowledge. He notes, “I always received more than I gave and it’s my pleasure to contribute to a community that I love.” 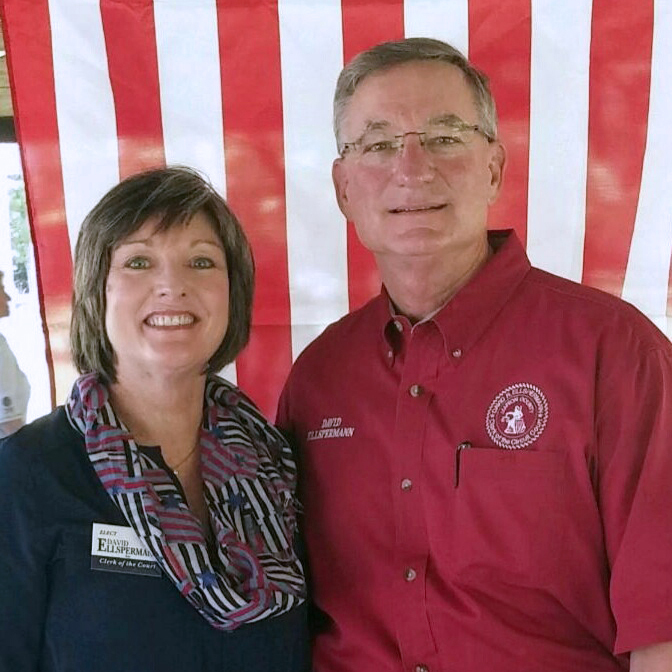 A love of the community is something he shares with Jayne. Distinguished in her own right, she joined Marion County Public Schools as a high school social studies teacher in 1980 and advanced to the post of principal of West Port High, where she was named National Principal of the Year by the National Association of Secondary School Principals. At that time, she was heralded as “the best principal out of nearly 100,000 schools in the United States” by the U.S. Secretary of Education. That same year, she was named Just Read, Florida!’s High School Literacy Leader of the Year. She also served as the president of the National Association of Secondary School Principals. In 2018, through her consultancy, Jayne Ellspermann, LLC, which focuses on school leadership development and empowering school leaders, she was hired to mentor the principals of 11 struggling local elementary schools to help them identify strategies and techniques to improve the success rates of student diagnostic testing and, last summer, was contracted by the Marion County School Board to be the outside operator of both Oakcrest and Evergreen elementary schools for the 2019-2020 school year.

Now 66, with short-cropped hair that’s more salt than pepper, Ellspermann bemoans the fact that health issues and injuries have sidelined him from riding his road bike—its odometer stuck at 39,000 miles.

“I used to do four 100-mile events a year,” he says wistfully. “Those days may be gone, but I’m looking forward to becoming more physically active again.”

And, of course, there’s family time with daughters Lisa Lombardo and Erin Buss, as well as his five grandsons, ranging in age from 9 to 14. Like the proud grandpa that he is, Ellspermann describes his grandsons as “a blessing every day.”

There’s also a planned, but loose, travel itinerary Ellspermann confides with a smile, “Jayne and I are just going to start driving west.”

Without hesitation, Ellspermann definitively answers, “No. I dedicated my career to public service and my personal life to community service. And now I’m ready to ride off into the sunset.”

What David Taught Me 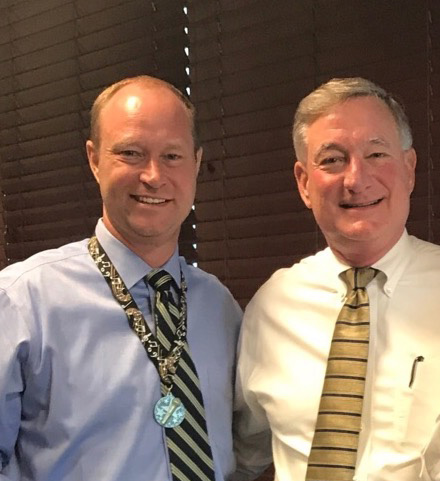 David called me out of the blue seven years ago to ask me who I thought might be a good candidate to become his new General Counsel. Within five minutes of speaking to him about his core principles and values, I asked him if he would stop his search before it began and consider me.

I have had the good fortune of working for him ever since, and he has taught me many things: Trust the Lord; do the right thing; remember who you work for (the people of Marion County); remember what you work for (the good of Marion County); do not be intimidated by influential forces telling you to do something else if you know you are in the right; seek counsel from others who know their stuff, listen to them, and let their expertise help inform your decisions; hire and surround yourself with good people and then put them in positions to create success; and be proactive and willing to embrace and adapt to new innovations and technology.