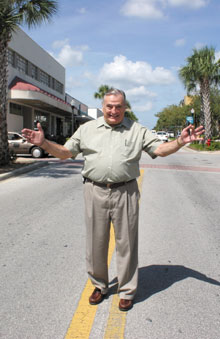 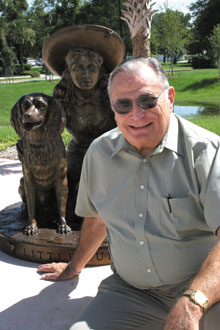 Bob Lovell is a true renaissance man. He loves literature and art. He is active in the politics at all levels of government. He can quote poetry to fit almost any situation, and his love of history is evident in decisions he makes every day.

A former mayor of Leesburg, Lovell has a passion for the town and the state he lives in. He grew up in Pedro, which he says in his autobiography was “about 15 miles and 100 years from Ocala.”

“When I was growing up, my grandfather spoke of Abraham Lincoln in the same way I speak of Roosevelt and Truman,” says Lovell. “His father was wounded in the Civil War, and a veteran, and my grandfather still spoke of Lincoln as a contemporary. While the rest of the world moved along in the 20th century, we were still in a 19th-century world.”

That background had a profound effect on Lovell, and he realized history was too important to ignore. As a result, he became a Civil War re-enactor and found himself contented walking among the shadows and ghosts of the old battlefields.

Sitting comfortably in his small office at Century 21 Realty, Lovell fondly speaks of living with coal oil lamps, iceboxes, smoke houses and days of fishing and camping around Central Florida lakes. His office walls are filled with historical photos, diplomas, awards, Civil War memorabilia and a black-and-white photo of himself with former President Ronald Reagan when Lovell ran for Congress.

“He was a very astute individual when I met him,” Lovell recalls. “I felt he was brilliant and swift. You’d have to be on your toes to keep up with him.”

Some might say the opposition Lovell faced when he first ran for public office was of his own doing. An unknown, he was running for a state office in 1970, but hadn’t held any local positions. He had no record to fall back on, but that did not stop him. He ran three times, the last in 1986 and lost every time. He was chairman of the Republican Party in Florida and elected state committeeman three times. In 1985, he ran for the city commission in Leesburg and was eventually elected nine times and served as mayor five times.

“Bob has always had time for our community, and been one of its strongest supporters,” says Wendell “Wendy” Husebo, another long-time resident and businessman. “With Bob, it wasn’t just a case of ‘one time.’ He has served in many ways, for many decades. The positive impressions others have of Leesburg are due in large part to Bob’s positive attitude and values.”

The issues Lovell worked on as mayor of Leesburg included upgrading the Leesburg Airport, clearly marking the entrances into the city, and improving area lakes.

“The airport is as central to this city as the old train depot was in the past. We had to bring it into the 21st century,” Lovell says. “I felt we needed the new library to have a culture center, and that’s why I pushed for recognition of Annie Oakley. She was the most popular entertainer in the world in 1900, and we need to let people know she’s a part of our town’s history.”

Husebo concurs, saying, “Bob has a great connection to our community’s history and to the heart of its people. How fortunate we are to have him here.”

Other concerns included bringing in new industry. “We’ve got to do something to keep young people here,” Lovell says. “It’s something we need to actively pursue.”

“The stress of politics and public service is a big thing. That’s why I had to quit at 70,” he says with an easy smile. “But I will probably continue to offer my unsolicited advice from the sidelines.”

Today, Lovell dabbles in real estate and focuses on his grandchildren.

“I want to see that they get an education,” he says proudly.

His 2005 autobiography is titled, Cracker Outlaw, and Lovell willingly talks about all the ups and downs of his life.

“I didn’t want it to be just sharing all the good times,” he says. “I wanted to tell about my life—the good times and the bad.”

Due to his mother’s battle with tuberculosis, Lovell lived with relatives on and off during his early years. He vividly remembers, however, his father reading aloud to him and his siblings. When he heard the words of The Yearling for the first time, he says he realized he had the same yearnings as the lonely boy in the story—to have a place that was his own and have a pet that loved him.

He often played in Little Scrub and Pedro just as Jody did in Big Scrub in Marjorie Keenan Rawlings’ book. Whenever he came across an injured animal, he brought it home and nursed it back to health. Lovell says the book accurately portrayed the way his Cracker relatives in the area lived in those days when they depended on the land to feed them.

It was in this unlikely setting that Lovell first learned the basics of politics as he and his cousins went around the area campaigning for their uncle.

“He won elections for 20 years, and then he retired. He died at 82 and was a very literate man, educated at the University of Florida, and he and his wife were teachers,” Lovell says.

The love of the land and nature Lovell learned in Pedro is still evident today as he tries to keep the people of Central Florida aware of how precious, water is and what must be done to preserve the natural resources in this area.

“I’m going to continually remind the younger generation of the vision they need to have,” Lovell says. “They’ll have the mayor emeritus whispering in their ear, ‘All glory is fleeting.’”