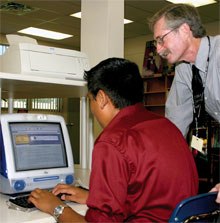 There is a childlike exuberance about Scott Hackmyer. It is a quality that has served him well in his 30-year career in the Marion County School System.

Hackmyer, 51, is in his ninth year as principal of Howard Middle School. All told, Hackmyer has been a principal for 18 years. It was the late Bill Caton, who hired him and mentored him, first as a guidance counselor, assistant principal, and eventually principal at North Marion Middle School. Hackmyer became principal of East Marion Elementary with a simple phone call from the superintendent at the time.

One would think that after three decades in the educational system, Hackmyer would have that “been there, done that” attitude. But refreshingly, there is no hint of that in Hackmyer’s demeanor. He is still an enthusiastic, dedicated believer in the power of education.

“We as educators can make a real difference in a child’s life,” says Hackmyer, a smile and a determined gleam in his eye. “These are our children and it is our job to take care of them, to educate them, to prepare them for their futures. But it takes all of us — families, educators, community leaders.”

That Hackmyer is getting that gospel, if you will, out there is evidenced by the many awards on the walls and the bookshelves of his workmanlike office at Howard Middle School. Just a sampling of the most recent honors: 2002 United Way Humanitarian Award, 2003 Strengthening Families Award, 2003-2004 Rotary Club of Ocala/ Silver Springs Administrator of the Year Award.

“I am humbled and honored by the recognition of such fine community organizations,” says Hackmyer. “But it really is a reflection our teamwork here at Howard, rather than about a single individual.”

Ask Hackmyer, who has a B.S. in psychology and a Masters in education, why he has chosen to toil in the lower grades of the system and he is quick to answer. “Probably the most important grade is kindergarten,” he offers, “because that’s a child’s first experience with the educational system. Then the next most important are the middle school years — sixth through eighth grade, ages 11-14.

“This is when children are at a crossroads and where caring, significant adults can still shape direction into their lives,” he continues. “This is where you can still grab their attention and make a difference. That becomes more difficult once they’re in high school.”

As the world has become more complicated — and more violent — Hackmyer has seen the role of schools change in the course of his career.

“We not only are responsible for educating children now, we are also expected to keep them safe while they are in our care. This is aftermath of incidents like Columbine and 9/11.”

To that end, Howard Middle School has several schedules within schedules. The official school day is 9:00am-2:50pm, but the extended day is actually from 6:30am-6:00pm to accommodate working parents. There are 40 after-school clubs, plus many tutoring programs during that time. The enrollment at Howard this fall is expected to be 1,280 students. Hackmyer oversees 80 full-time teachers and a staff of 125.

Pencil Hackmyer in for the extended-day schedule. “The days are incredibly busy,” he says. “I like to be as visible as possible to the students and the teachers. And a great part of my time is taken up by the actual management of the facility.”

That being said, Hackmyer defers to his dedicated staff.

“The real job, the most important work here is done by the teachers. My job is to make their jobs easier. We really have to be a team if we’re going to accomplish all we need to here.”

It’s indeed a daunting task, but one that Hackmyer faces with endless enthusiasm.

“My goal is to make school such a positive place in our students’ lives that they want to come every day,” says Hackmyer, adding with a smile, “even on Saturdays.”

If anyone can accomplish that rare feat, it has to be Hackmyer.