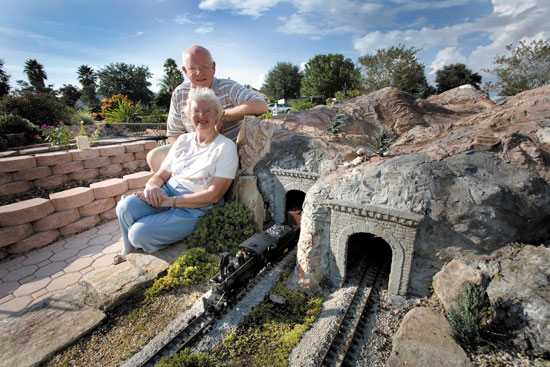 Trains chug through a rugged mountain range in the Colorado territory… all within footsteps of Dr. Vic and Betty Gilbert’s Leesburg home. The 30-by-30 foot layout features three G-scale locomotives wending and winding around Sandyflats. There’s a station with waiting passengers, an outhouse, a replica of Wyatt Earp’s Second Class Saloon complete with cowboys, and even a small Indian village.

“Notice the Lone Ranger,” Vic says. “He’s riding to the rescue of the guy tied up.”

An even closer look reveals two other oddities: an elephant and an out-of-scale rabbit.

“When little kids come, we ask them to spot an animal that doesn’t belong in the Old West,” says Vic. “They see the elephant immediately. The adults stand there and look and look.”

The Gilberts had so much fun with the first layout that they created a second 40-by-30-foot layout where a modern streamliner Santa Fe locomotive pulls a seven-car train.

“We got started because both our careers were indoors,” says Betty Gilbert, who worked as a registered nurse, while her husband was a family doctor. “We knew we were approaching retirement age, and so we were looking for something that we could do outdoors.”

Once they saw an outdoor garden railroad at The Incredible Christmas Place in Pigeon Forge, Tenn., you could say they were “railroaded” into a hobby thousands of people around the globe enjoy. 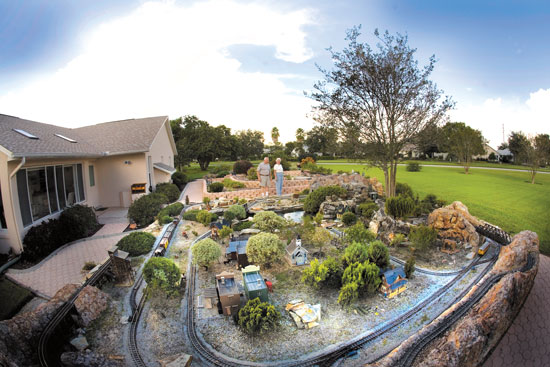 Vic and Betty Gilbert enjoy a quiet moment in their backyard garden.

The rise of garden railroads can be directly traced to the infancy of the railroad, according to Garden Railways magazine, the leading authority on the subject. Railroaders often built models to show clients what proposed trains would look like. Because they were powered by steam and were large, those models ran outdoors. Before long, however, manufacturers realized that a profit could be made in producing toy trains. The craze caught on, especially in Great Britain and Germany.

“If you talk to any one of these guys, most of them started out as kids playing with trains,” says Frank Kimmel, a Clermont resident and the director of Florida Garden Railway Society–Central Division. “Now they’re big boys with toys.”

As for Frank himself, his story is no different.

“When I was eight years old,” he says, “my father bought me a train set for Christmas, and it’s been a passion since then.”

His “big boy” layout takes up a quarter of an acre and is a work in progress. Though he estimates he spends about 25 hours per week in his train garden, he says it will take him almost three years—or possibly even longer—to finish the layout.

“There’s always something to be done,” Frank explains.

Even the Gilberts, who swear their two layouts are their last, say they are far from finished.

The Gilberts, in a way, are rather atypical railroaders. Though Vic had a Lionel train as a boy, he says he did not play with it much. He and his wife of nearly 50 years only experienced trains as passengers in New York.

“We really had no real train experience at all,” he says. “We figured they’re kind of cute.”

Betty laughs. “‘Isn’t it cute?’ The three most expensive words I’ve ever said!”

Starting from scratch could have been daunting, but the Gilberts got on track by joining organizations—one of which is the Florida Garden Railway Society, which has approximately 150 members locally and 250 members statewide.

“You don’t need to have a layout to begin,” says Vic. “You can go around and see the layouts, and talk to people and see what they know.”

The Florida Garden Railway Society–Central Division, for example, maintains a train layout for charity at Arnold Palmer Hospital for Children in Orlando.

“We have fun,” says Frank. “We’re always willing to go some place with our trains to show people how much enjoyment there is in doing something like this.”

The society gathers monthly at members’ houses, taking turns hosting. At the most recent meeting, Frank had nearly 40 participants, some coming from as far away as Palm Coast and Naples. For the occasion, Frank brought out various buildings. His garden railroad now runs along the fence line in an L-shape. A mound of dirt contains a Koi pond but will one day hold a gigantic layout connected to his rail line.

“Frank’s is probably the very best system for controlling something like 30 trains at one time,” says Vic, “and it’s done with track power.”

The Gilberts have two generations of electronics, as well as a track that’s battery-operated. Electronics was Vic’s assignment, and he was especially careful because of the fierce lightning Florida receives during the summer months.

“That brass track is a beautiful conductor of electricity,” he explains, “though, theoretically, it does not bring it back inside.”

As for hurricanes, he’s less worried.

“We had absolutely no damage at all from the four hurricanes that hit us,” he says. “The track is set on four to five inches of reinforced concrete.” 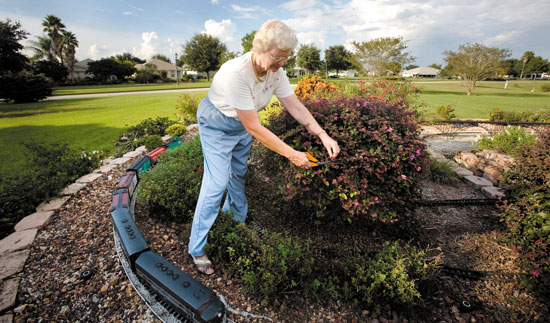 Though garden railroading only later became associated with actual gardening, it happens to be one way the male railroaders’ wives can get involved in the hobby.

At the meeting, Ron Day of Umatilla explained the role his wife plays.

“She supports me,” he said. “The wives usually take care of the planting and gardening.”

Barbara Kimmel, however, is still waiting to finish her job.

“I’m aiming for the landscaping part,” she says with a smile. “I want to plant an orchard with miniature trees.”

The Gilberts’ plants around their Leesburg garden include plumbago, crotons, carpet roses, Aztec Grass, juniper, blue daze, caladium, and others, which Betty has mapped to help her determine the most successful varieties.

“One of the things we found is that by getting into trains, you can go into a lot of incidental areas,” she explains. “Gardening, of course, is one of them, and in gardening, I deal with miniature plants.”

But she’s no shrinking violet. Vic says Betty’s done as much work as he has on the railroad. She even chose the Wild West theme—because she liked the engines. They work according to their strengths and interests and their railroading has evolved into other hobbies.

“Vic likes photography, so he uses the scenery and the trains as subjects for his photography,” she says. “He uses his computer to do photo imaging, which progressed to video editing.”

They say nothing is as relaxing as watching the trains chug around.

“It keeps us young,” Vic says.

They even plan corresponding trips, such as one to Nuremburg, Germany, to see the manufacturers. They’ve gone to Colorado, the inspiration for their layouts.

“We thought,” Betty recalls, “Gee, that looks just like our backyard.” 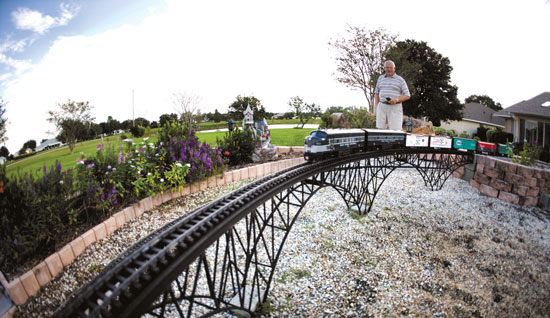 BE YOUR OWN ENGINEER
So you want to get into garden railroads? Frank Kimmel, director of Florida Garden Railway Society-Central Division, and Vic Gilbert, a member, have some tips for you:


Did You Know?
G-scale, the scale of choice for garden railroaders, is used for its size and durability for the outdoors. The “G” does not stand for “Garden” scale. The name comes from the German word, “Große,” meaning “big.” The most popular scales for model railroads are HO, N, O, G, TT, and Z. G-scale is more correctly called G-gauge, since the gauge of the track is 45 mm, or about 1.75 inches.