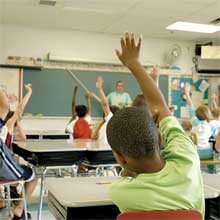 In a few weeks, Marion County public school students should get a good night’s sleep, eat a healthy breakfast, and come to school with #2 pencils. This perennial advice is offered to students before they take the Florida Comprehensive Assessment Test, more commonly known as the FCAT — the state’s 11-year-old student progress test.

The tests gauge how students are performing, and the results could also translate into new computers for high performing schools or a new book for each student. More commonly, it also can mean a nice bonus for teachers, faculty, and staff — up to $1,500 each in some cases.

These are the tangible benefits of School Recognition Funds — direct monetary rewards for Florida schools that receive an “A” letter grade or improve their score by at least one letter grade, says Kevin Christian, Public Relations and Communication Officer for Marion County Schools.

“It really has been a source of money for a lot of schools,” Kevin says. “Specifically, each school that performs to certain standards and receives those grades then receives $100 per student.”

“The legislature stipulates what the recognition money can be used for,” says Marlene Bjork, principal of Harbour View Elementary School. “And those three things are staff bonuses, non-recurring supplies and materials, or temporary personnel.”

At Ward-Highlands Elementary School, each student can buy a book valued up to $5 at the school’s book fair, says Beth Cordova, principal.

“They got to pick out their own. They absolutely loved that,” she explains. “They would come up to me later on throughout the week when they got their book and say, ‘Thank you, Mrs. Cordova, thank you.’ I just kept telling them, it’s the whole school that’s giving this back to you for what you’ve done, for your wonderful efforts.”

Those “wonderful efforts” resulted in Ward-Highlands receiving an “A” for several straight years.

School grades are based on a point system: how much a school’s students improved on reading, math, and writing in the yearly FCAT. Science scores from the test, which fourth, eighth, and 11th graders take this spring, will also count.

If a school received a “B” one year and kept that “B” the following year, it would receive no money.

“More schools get money for improving their grades,” Kevin explains. “The FCAT formula also takes into account the percentage of students who have made a learning gain. This learning gain concept is new to FCAT.

“In years past, grades were based on a numerical score of the school,” Kevin adds. “For a school to receive an ’A,’ it must receive 525 points (the old total was 410). It will be interesting to see how that plays out.”

The FCAT started in 1998, “part of Florida’s overall plan to increase student achievement by implementing higher standards,” according to the test’s Web site.

Performing schools do not automatically receive money, however. Each school has to develop a School Improvement Plan each year, set goals within that plan, and then meet those goals. All of this is done by the school’s administration and its School Advisory Council (SAC).

Ultimately, each school’s advisory council approves the plan, and each SAC must make sure the plan to spend the money ties into the School Improvement Plan.

By state law, the majority of each SAC’s membership is non-school employees, such as parents and people from the community. Teachers are represented as well. As such, not everyone always agrees on how school recognition funds should be spent.

“It’s been a point of contention, obviously,” says Kevin. “It’s also been a source of funding. Sometimes one group wants all of the money to go to bonuses. Sometimes, another part of the group wants it to go to the kids.”

Most schools spend the bulk of their school recognition funds on bonuses. Of those, some schools give money only to teachers; others go as far as to spread the wealth to teacher’s aides and cafeteria workers. Last year, one school even gave a bonus to bus drivers.

While school recognition funds have to be tied directly into a school’s improvement plan, some schools find ways to creatively use that money.

At Dr. N.H. Jones Elementary School, a technology magnet school, $1,000 will be spent on risers for school performances, says Don Raymond, principal. “It was felt that all students would be using these.”

The school also set aside $12,500 to purchase technology.

“Some of it was for Safari Montage, which is a high-volume server that has more than 1,300 videos that students and teachers can access for instruction, for student presentations, and for research,” Raymond says. “Other technology purchases include video projectors that will allow computer images to be displayed and cameras to support our media production program. The balance of the technology funds was used for support materials such as cords and rechargeable batteries. Some staff members took the allowed bonus and placed it into the school account to be used to purchase materials to support their classroom program. Although most staff members took the straight bonus, most of them spend in excess of this amount in
the classroom.”

Some schools set up a committee of faculty and staff to make a recommendation to the SAC as to how the money should be spent. That is what happened at West Port Middle School, says Gregg Dudley, principal.

“The committee used seven plans that had previously been used in the district as a starting point for discussion. These plans were presented to the faculty, and the plan that clearly emerged as the favorite was tweaked and refined to give us the plan that we ended up with,” explains Dudley. “All 2005-2006 WPMS employees received a one-time bonus based on their job classification and the amount of contract days that they worked. The remaining funds, which amounted to a few thousand dollars, were allocated for increasing teacher internal budgets for consumable classroom supplies. This plan was approved by the SAC in accordance with state and district guidelines.”

Schools must submit their plans by Nov. 1. If a school misses the deadline, that is “if no plan has been approved jointly by the SAC and the staff, all of the recognition money goes to the current classroom teachers in the form of bonuses,” says principal Marlene Bjork of Harbor View.

Schools cannot, however, spend the money on parties, food, or on instructional materials.

Here’s a sampling of how a few schools have allocated school recognition funds:

Harbour View Elementary School has allowed each student to choose a book valued up to $5 from its book fair, says principal Marlene Bjork. “Most years we have gone with a combination of bonuses and money to the students to spend at the book fair. This year we had our book fair very early in August and the plan went for all bonuses for the entire staff. No staff member is left out,” she says.

Howard Middle School took 10 percent off the top to give back to students. “The staff here believes using technology with instruction will impact student improvement,” says Kathy Collins, principal. “Last year, we bought school pads, projectors, smart boards, and laptops.” This year, more equipment and software will be bought — approximately $12,000 on technology. Bonuses came to $1,500 each for faculty members, approximately $600 for secretaries and teacher aides, and $300 for custodians and cafeteria workers.

Greenway Elementary spent $1,208.29, or 1 percent of the school recognition funds, on physical education equipment, media center materials, and books. The remainder, $94,080.71, was given as bonuses.

At North Marion Middle School, the funds “were divided into two parts — faculty and staff bonuses for all staff that were part of the team last year when the scores were such that we qualified for the money; and the rest will be used in updating our existing technology,” says Nell Clegorne, curriculum coach. “The funds designated for technology will be used to enhance teaching and further student learning.”

School recognition funds have a wider impact than extra money for teachers and staff.

“It’s helped us explain and work with teachers on the impact that FCAT and student achievement is real,” says Collins of Howard Middle School. “This is the state’s way of saying that the school grade is important.”