If you’re over the age of 30, chances are you remember the morning of September 11, 2001. You either watched in horror as the planes struck the twin towers live on morning television or you saw the video images later on the evening news. 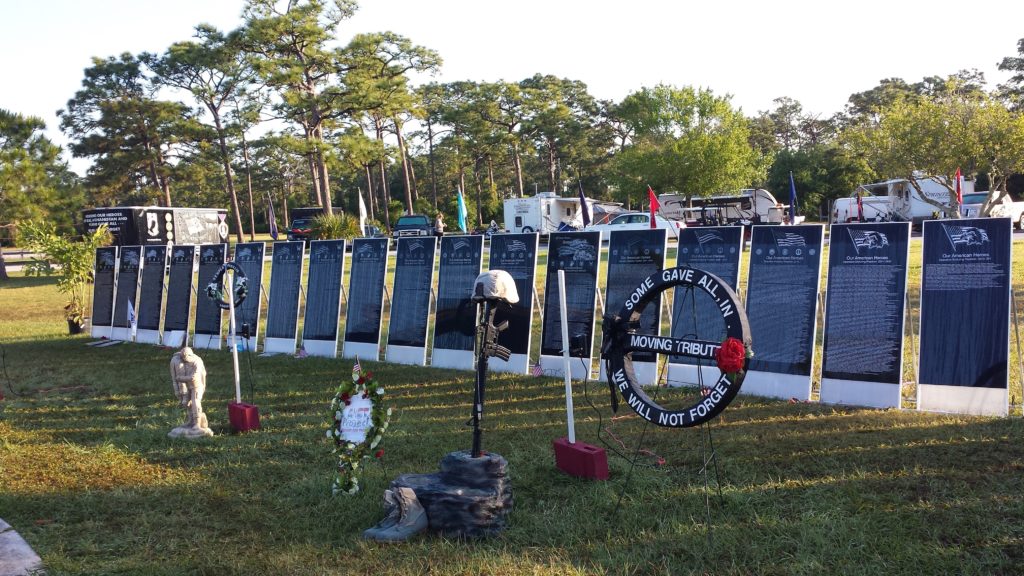 Eighteen years later, we remember the nearly 3,000 people who perished that day with the 9/11 Traveling Memorial Wall, on display at the Marion County Veterans Memorial Park September 11th-15th.

“We’re so honored to be able to host it at the Veterans Park for the first responders,” says Ron Oppliger, a Vietnam veteran and volunteer for the Marion County Veterans Memorial Park. He explains that a committee of local volunteers working with the Florida Highway Patrol, Marion County Fire Rescue, Marion County Sheriff’s Office, Ocala Fire Rescue and Ocala Police Department is coordinating five days of related events while the traveling memorial is displayed.

The new Marion County Veterans Exhibit and Education Center, in the former veterans services office next to the park, is curating a temporary exhibition commemorating 9/11 that will also be open to the public that week.

“Folks will be able to go look at the wall and see the different programs going on there and then come down and walk through our facility,” says Adam Sines, volunteer coordinator for the education center. He is organizing the exhibit to make it as relevant as possible to Marion County, explaining that there are a surprising number of local connections to the tragedies. “We want to do our best to represent all the victims who were lost and how that affected us even down here.”

Sines says local residents have loaned items for the exhibit, including a piece of the tower, artworks, and personal memorabilia from a local widow who was on the phone with her husband, watching on television as the second plane struck the World Trade Center tower where he worked. She will share her story at the Survivor Stories event, designed to promote healing for those affected.

“That’s been one of the amazing things about this project; we’ve been able to meet people and see how much this program is helping people,” Sines says.

The 9/11 Traveling Memorial Wall will be on display at the Ocala-Marion County Veterans Memorial Park, 2601 East Fort King Street, around the clock from 8:30am on September 11th through 5pm on September 15th.

A motorcycle rally beginning at WarHorse Harley-Davidson on North U.S. Highway 441 will escort the traveling wall to the Veterans Park.

The public is invited to the following events: