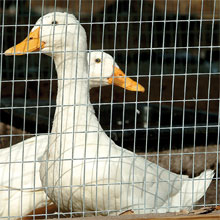 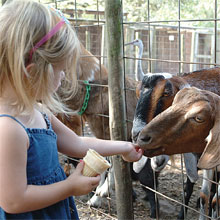 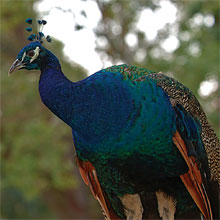 On a recent, perfectly breezy and cool Florida afternoon, I fell in love with Charley, Frances, Stormy, and Jeanne. (I know, I asked what happened to Ivan, too!) No, I’m not talking about the dreaded hurricanes Florida endured this season. I’m talking about four baby goats that reside in what I’m convinced is one of Lake County’s best-kept secrets: Uncle Donald’s Farm.

Now, just so you know, I should explain that I’ve been an animal lover since day one, fawning over puppies, kittens, even squirrels. And even though I’m an equal-opportunity animal lover, something about these three-week old goats really touched me. I spent a good thirty minutes just watching and petting them. They were just so adorable! Standing maybe one-foot tall, they acted every bit as curious and forthright as their grown-up counterparts. The young preschoolers who were there on a school field trip felt just as drawn to the tiny goats.

“My dog Roger is bigger than those goats!” one boy exclaimed. Other children just squealed with delight when the animals came to the fence, curiously checking out their young spectators.

While my favorites (and perhaps several of the preschoolers favorites as well) may have been the baby goats, Donna Morris, who operates Uncle Donald’s Farm with several family members, has her own personal favorites, too.

“I love all of the animals we have here at the farm,” she says. “But Marshmallow and Jingle Joy are my favorites, hands down. They’re so spoiled.”

These two lucky Jennies, or female donkeys, get lots of undivided attention from Donna, who says she just can’t resist their faces.

“I love the donkey’s independent spirit,” she says. “Horses react when something happens; donkeys stop and think about the situation, then they react.”

Growing up, Donna and her family always had animals, often showing them in local 4-H contests, so it was natural for her to want to continue to be around animals. And I do mean lots of animals. Today, the Morris family runs Uncle Donald’s Farm (named after Donna’s father, Donald), a local refuge for injured, unwanted, or orphaned animals and birds. It’s also an educational experience for the whole family.

“This isn’t just a typical petting zoo,” Donna explains. “We make it a point to educate our visitors about the animals they’re seeing. It’s important to know where they come from, what they eat, how they sleep — things like that.”

Sprawled out on 50 acres of property just two miles north of Lady Lake, Uncle Donald’s Farm is a must-see. On a typical day, Donna and her family are up before dawn and out working on the farm by 6:30am. After all, it’s not easy to care for horses, donkeys, cattle, rabbits, chickens, a panther, and a llama — or roughly enough creatures to fill a small ark.

“Many of our animals were mistreated or unwanted,” Donna says. “We care for these animals and give them a friendly, clean place to live out their lives.”

On my personal tour with Donna, she answered questions about each animal’s history. I learned that the Florida panther, an 18-year-old cat named Joker, came from a zoo that didn’t have the means to keep him. Joker’s ancestry runs back to a time before the Florida panther was a protected species.

Joker lazily watched us watching him from high up on his perch. I was amazed at the similar actions he had to my two very small kittens – Hello, Milo and Katie! — at home. He stretched and rolled the same way his tiny relatives do. Of course the playful sign that read, “Violators will be eaten,” brought me right back to reality.

Moving on, I met an otter named Weasel. Odd, I know. At first it was hard to spot the little critter. Donna said that Weasel was still in hurricane mode and had created two separate dens for herself within her enclosure. We found Weasel at the very top of her cage, resting comfortably. She finally made her way down into the water, where she proceeded to do the otter’s version of the backstroke for us.

Wilbur wasn’t as exciting as Weasel. Wilbur the pig slept the whole time we watched him and Donna mentioned that Wilbur’s friend, Charlotte, has her own web in the corner of his pen.

Now, Charlotte’s Web was one of my favorite books growing up. I distinctly remember my fourth grade teacher, Mr. Ormond at Ward Highlands, reading it out loud to us. I loved the book and told my parents about it. Several days later, my mom came home with my very own copy of Charlotte’s Web, which I still have today. At Uncle Donald’s Farm, that story plays out in real life every time its gates open.

“We do our best to make this an educational experience for the children,” Donna says. “We have the Velveteen Rabbit and Charlotte and Wilbur from Charlotte’s Web. We relate many of our animals to classic children’s books in the hopes that the parents will read these books to their children.”

I thought that was a fantastic idea.

Continuing with the tour, we entered the reptile house (fortunately, we didn’t stay long) where I saw a record eight-foot-long rat snake. Apparently rat snakes normally only reach six feet. To be honest, I didn’t quite catch the snake’s name. I do, however, remember Iggy the Iguana, who munched on his lettuce.

When we walked up to the enclosure that houses two deer, Jamie, a very lucky animal, immediately came over to examine me and see if I had brought a few pieces of corn with me. I managed to scrounge some up that others had left behind to feed my newfound friend.

“A lady found Jamie on the side of the road,” Donna says. “She was so young that the umbilical cord was still attached.

“The deer ended up at Dr. Allen’s office in Leesburg,” she continues. “Dr. Allen was kind enough to donate more than $1,000 in surgery to keep her alive. Her back legs had a lot of work done to them. If it wasn’t for that lady and Dr. Allen, Jamie wouldn’t have made it. I named the deer after the two of them.”

I also saw a huge variety of birds, both exotic and native to Florida, along with prairie dogs, foxes, skunks, and an abundance of other animals.

When I returned home, I talked about Uncle Donald’s Farm so much that my fiancé and I already have plans to go back and visit after our honeymoon. Besides, he’s an animal lover, too.

“It’s great for people to see the animals up close,” Donna says. “Hopefully, if they learn about the native animals, they’ll respect the environment. That’s our ultimate goal.”