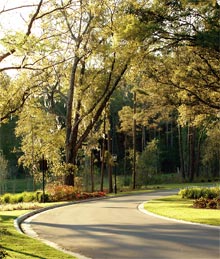 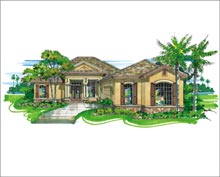 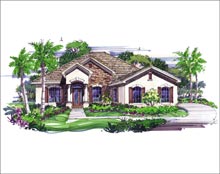 If location is everything, then Ocala’s newest gated community is the place to be. Located just a few short miles off Hwy 441 near 17th Street, Bellechase offers its residents quiet serenity surrounded by an abundance of nature, while at the same time boasting a close proximity to all Ocala has to offer.

“It’s all about the lifestyle,” Property Developer Larry Young says. “As a homeowner, you won’t have to worry about maintaining your yard — it will be done for you. The Villas of Bellechase is a beautiful community that offers a secure, relaxed atmosphere where residents can pick up and go at the drop of a hat.”

If the lifestyle isn’t enough enticement, the official builder of the Villas of Bellechase is Ferrentino Homes, Inc., the independently owned and operated local builder of Arthur Rutenberg Homes. Ferrentino, known for its award-winning architecture, floor plans, and aesthetics, has been building in the Ocala area for 20 years.

The 30-acre villas site will be developed in two phases, each consisting of approximately 40 homes. Phase I is expected to be completed in early 2005.

With clearing and prep work slated to begin this month, Ferrentino & Sons and Boyd Development already have a database filled with clients who have expressed an interest in The Villas. The homes, which will average between 1,800 and 2,500 square feet, will feature the same quality, vendors, and building products Ferrentino & Sons uses in its million-dollar homes.

“We expect villa homeowners to run the gamut,” Larry says. “These homes will appeal to young professionals, families, empty nesters who may or may not have retired yet, and those looking to downsize to a smaller home. I think everyone will have similar backgrounds and come together to establish a close-knit, secure community.”

The luxury villas will feature as standards what many other builders consider to be upgrades.

“Granite countertops, custom cabinetry, high ceilings, and decorative niches will be showcased in each home,” Michael says. “We’ll include all of the nuances that people have come to expect from a Rutenberg home.”

Residents will have the opportunity to choose between several floorplans, each with their own unique features.

“A lot of villa-type properties look the same,” Michael says. “Many have very little landscaping and trees, and maybe they’re situated on a golf course. At the Villas of Bellechase, we’re not going to have that ‘retirement home’ feeling. While homeowners will choose between a selection of floorplans, the outside of the homes will offer many variations, with some using brick, some stone, et cetera. They’ll all have a distinct appearance, but each home will blend aesthetically with the next.”

Perhaps one of the greatest amenities in both Bellechase and the Villas of Bellechase is the natural beauty that greets residents and visitors around each twist and turn.

“Our big thing is nature,” Larry says. “We kept as much of this area as natural as possible while developing. Once you’re inside Bellechase, you’d never know how close you are to 441.

“We managed to find this area that’s heavily wooded with 70 feet of natural elevation changes,” he continues. “We got lucky. People are always commenting on how green and pretty it is. Another plus is, unlike many other larger communities, Bellechase has City of Ocala amenities, including trash pickup, Cox Cable, and Sprint telephones.”

Larry and Michael literally walked what would become the roadways and did tree surveys inside Bellechase.

“If there was a beautiful, old oak tree, the tree didn’t come down. The road wrapped around it,” Larry says.

Only at the entrance to Bellechase will residents notice any manicured, highly organized flowerbeds.

“We wanted our landscaping to fit in with what Mother Nature already provided,” Larry explains. “Our main purpose was to enhance the natural setting, and that meant a lot of greenery.”

Larry, Michael, and Michael’s business partner, Eddie Ferrentino, also made it a point to create parks, walkways, and beautiful ponds throughout the community.

“The aquatic plants that surround the water features look like they’ve been there for years and years,” Larry says. “We are highly committed to keeping the area lush and green.”

Larry is especially proud of The Mountain, a large, open area, with an even larger hill — something you don’t often see in Florida.

“We’ll probably even the hill out a little bit and make hiking trails and decks at different levels,” he says. “We’ll also plant a lot of trees and greenery. The field next to the hill will be a perfect place for parents to play with their children and the family dog. There will also be several barbecue pavilions.”

The developers have plans to attract birds of all types to the area, and they’ve already begun to plant butterfly gardens.

“Herons, egrets, and ducks already call the community home,” Larry says. “This past summer I came out here at night and saw, literally, thousands of lightning bugs. It really does feel like you’re out in the country — it’s beautiful.”