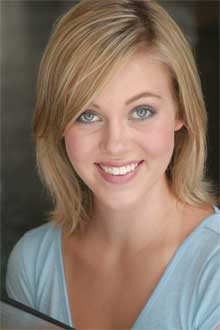 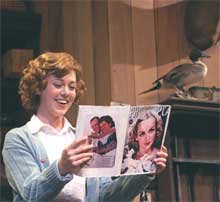 Singing since she was a toddler, Brittany has evolved into a multi-talented performer with an impressive list of accomplishments for one so young. A soprano, at 10 she was part of the ensemble for The Orlando Opera’s production of Carmen. A member of the Ocala Civic Theatre, she has acted in that group’s productions since she was eight years old. Her roles have included Becky Thatcher in The Trial of Tom Sawyer, Dainty June in Gypsy, Jemima in Cats, and Ruthie Mock in The Battle of Shallowford.

Brittany has performed with the Florida Dance Theatre, in the Florida State Thespian Festival, and as a dinner theater soloist. She is a member of the International Thespian Society, the world’s largest honor society for high school theater arts students.

Last summer, she was chosen from 300 hopefuls a la American Idol auditions to participate in the 2006 Broadway Theatre Project. Held at the University of South Florida, the three-week project’s master class artists included such Broadway notables as Ben Vereen, Patrick Wilson, and Terrence Mann. The course concluded with a musical performance at the Tampa Bay Performing Arts Center.

Not only can Brittany sing and act, she can do it in several different flavors. Her dialect skills include Southern, British, Cockney, Irish, Spanish, and French. And she can dance — ballet, jazz, tap. And if called upon, she can also play the piano.

“I’ve been performing all of my life,” says Brittany, whose 5-9 stature gives her added stage presence.

All that taken into consideration, it’s not much of a surprise that Brittany auditioned for and was chosen as one of 48 high school students from 21 states to appear in the Thoroughly Modern Millie School Edition. Brittany will be performing in the role of Daphne and in the ensemble of the first-ever production presented by Music Theatre International and the Educational Theatre Association. The show will be performed at the June 2007 International Thespian Festival in Lincoln, Nebraska. In addition, the performance will be recorded and be made available as the official study guide to schools and educational groups nationwide.

“It’s a huge honor,” says Brittany, who will be going to Kenosha, Wisconsin, for intensive rehearsals for the show in March, May, and June. “I am so delighted to have been chosen to be part of this. It’s a wonderful opportunity.”

Brittany’s talent was evident before she was even aware of it. As a toddler, she was singing before she could even talk. Her mother, Laurie Menard, is an eyewitness to the fact.

“Brittany would be in her crib, listening to whatever was playing on the radio,” remembers Laurie. “She’d pull herself up and then sing in perfect pitch what she’d just heard. I was amazed.”

By the time Brittany was six months old, Laurie enrolled her daughter in KinderMusic. Think program for the musically inclined. That was just the beginning, though — Brittany has been in performing arts classes ever since.

Her first official part was that of Tweedledum in Alice In Wonderland when she was seven.

“I loved it so much that I cried when the show was over,” remembers Brittany. “So Mom just kept signing me up for more shows. It was what made me happy.”

What also makes Brittany happy is being an all-around performer. She’s not content to “just be a singer or just be a dancer or just be an actress. I want to do it all and be the whole package.”

And while she’ll admit, “There’s nothing like the rush of being on stage and performing before an audience,” she’s no stage diva. She loves the whole process from lessons to auditions to rehearsals.

It’s a good thing she feels that way. The typical day for Brittany, who is a Vanguard High School senior and part of its rigorous International Baccalaureate Program, be-gins at 6:30am and generally ends at midnight. It’s a jam-packed schedule of school classes, extracurricular activities such as lessons, rehearsals, performances, and homework. Then she gets up the next morning and does it again.

No wonder Brittany’s favorite city is New York, the city that never sleeps and that is the heart of the theater world.

“I was nine years old when I first visited New York City,” recalls Brittany. “I fell in love with everything about it right away. The Broadway shows, the energy and pace, everything. I remember telling mom, ‘This is my city.’ I look forward to our trips there every time we go.”

New York City is where Brittany wants to eventually work and live. But she’s got a few other things on her hectic schedule to take care of first. Graduating with highest honors this May, Brittany has already been accepted to several universities with offers of academic scholarships. Beginning in January and going through March, she’ll visit a dozen of the best schools with musical theater programs.

“I have auditions lined up at University of Michigan, Syracuse, Ithaca, schools that have outstanding musical theater programs,” says Brittany. “It’s what I’ve been working toward.”

And for Brittany, it’s just another step on the way to seeing her name up in the marquee lights.

“I don’t ever remember a time,” she concludes, “when music wasn’t part of my everyday life.”