And while anyone who goes through a traumatic event can develop this debilitating psychiatric disorder, combat veterans have become those most commonly associated with PTSD. According to the U.S. Department of Veterans Affairs, about 30 percent of post-9/11 military veterans who have visited a VA medical facility have screened positive for PTSD.Then there’s this sobering statistic: one in six veterans with PTSD have suicidal tendencies and/or will attempt suicide. The go-to treatment protocol involves psychotherapy and medications, often concurrently. But a new option—service dogs—is being investigated as an effective long-term prescription for PTSD.

K9s For Warriors, a non-profit organization based in Ponte Vedra Beach, Florida, is actively participating in two PTSD service dogs investigative studies. In collaboration with the Human Animal Bond Institute Foundation, a Purdue University College of Veterinary Medicine study involves 100 veterans who are being paired with service dogs by K9s For Warriors. The one-year study began in February; testing will assess the differences in medication use and PTSD symptoms before and after veterans receive a service dog.

At St. Augustine-based Flagler College, Dr. Tina Jaekle has studied self-reported data from veterans who have gone through the K9s For Warriors program over the past four years. Next is a year-long study, which began in August, by Jaekle and Dr. Angi Senegon. This in-depth research study will involve interviews, surveys and observation.

The VA, which suspended an earlier study, is also conducting a current three-year study. That study will involve veterans with PTSD in Atlanta, Iowa City and Portland; the dogs will come from training facilities in California, Alabama and North Carolina.

“The VA provides service dogs to veterans with physical disabilities but not for mental disabilities such as PTSD,” says Rory Diamond, executive director for K9s For Warriors. “Their assertion has always been that there wasn’t enough scientific evidence to prove that service dogs are an effective treatment for PTSD. Our goal with these studies is to provide that evidence.”

Jaekle, an associate professor with Flagler College’s Department of Social Sciences, is already impressed by the early data.

“As a licensed clinical worker and trauma consultant to law enforcement and first responders, I’ve had 25 years of experience in dealing with PTSD,” says Jaekle. “In studying the veterans self-reported data from K9s For Warriors, I’ve never seen anything like the positive impact that the service dogs have on those with PTSD.”

Founded by Jacksonville resident Shari Duval in 2010, K9s For Warriors has to date paired 165 and counting veterans with service dogs. The organization also provides service dogs to veterans suffering from traumatic brain injury and military sexual trauma as a result of military service post 9/11. The dog, training, certification, equipment, seminars, veterinarian care and veteran housing during a three-week training period are provided at no cost to the vets.

“We’ve seen the tremendous impact the PTSD service dogs have on veterans,” says Diamond. “Our goal is to put vets on a road to recovery and help them regain their quality of life.” 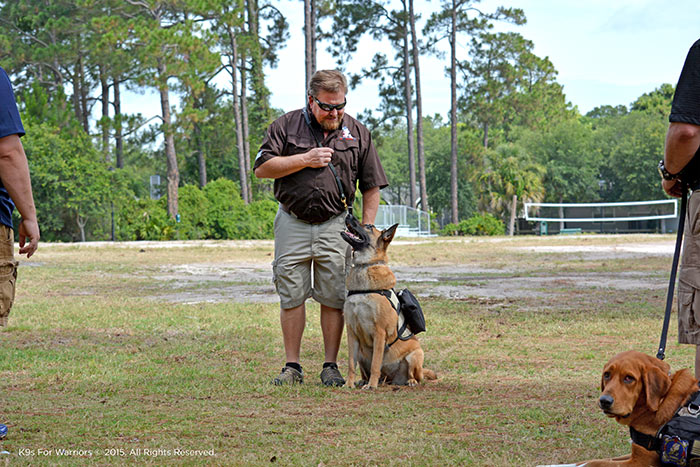 At K9s For Warriors, 95 percent of the dogs used in the program are from shelters and rescue groups. Others come from private donations and small breeders. Although the program deals with a variety of breeds, labradors and golden retrievers, purebreds or crosses of these breeds, tend to be most suited to the work.

“We like to say that we save the dogs and the dogs save the vets,” says Brett Simon, director of K9 Operations. “It’s a win-win all the way around.”

Simon is uniquely qualified for his position. A longtime K9 police officer, Simon served two tours in Iraq as a contract bomb dog handler. Initially diagnosed with clinical PTSD as a police officer, he returned from Iraq with a full-blown case. It was Simon’s struggle with PTSD that led his mother, Shari Duval, to found K9s For Warriors.

“I personally know that PTSD service dogs work,” says Simon, whose dog is a Belgian malinois named Reagan. “And we want to give more vets the opportunity to have one.”

After a temperament and trainability evaluation, the dogs generally begin obedience and task training at 9 to 10 months old. Depending on the dog, they can be in the training program three to six months.

“Once the dogs have advanced into the training process, we take them out into public places every day. The dogs wear service dog vests, and we use hands-free body leashes,” says Simon. “We have to get the dogs to give us the response necessary to help the vet in public situations.”

Some of the task training includes: performing a sit/stay away from the vet to ‘watch his back;’ forging ahead around a corner in front of the vet; safety checking a room before a vet enters; responding to elevated stress/anxiety levels by licking, pawing or bringing a toy to interrupt the episode; nudging a vet awake from a nightmare. The training is certified with Assistance Dogs International Training. Dogs are ADI re-certified every two years.

“When the dogs are about 80 percent trained, then the vets come for a three-week on-site training program with the dogs,” says Simon. “The vets arrive on Sunday, and we have an orientation session. By Monday, we have them matched with a dog. In addition to training with the dog on site and in public, the vets also go through 15 hours of classroom work on topics like dog care and service dog laws.”

With an in-progress move to a new facility, K9 For Warriors has plans to go from serving four to five vets a month to eight with an eventual goal of 16 a month some time in 2016. They currently have a 15-dog kennel, but the new facility will house 27 dogs.

“For many vets, our program is their last-ditch effort to get better. Many come to us very skeptical,” says Simon. “But the first time a dog responds to their need, their whole attitude changes and they have hope.” 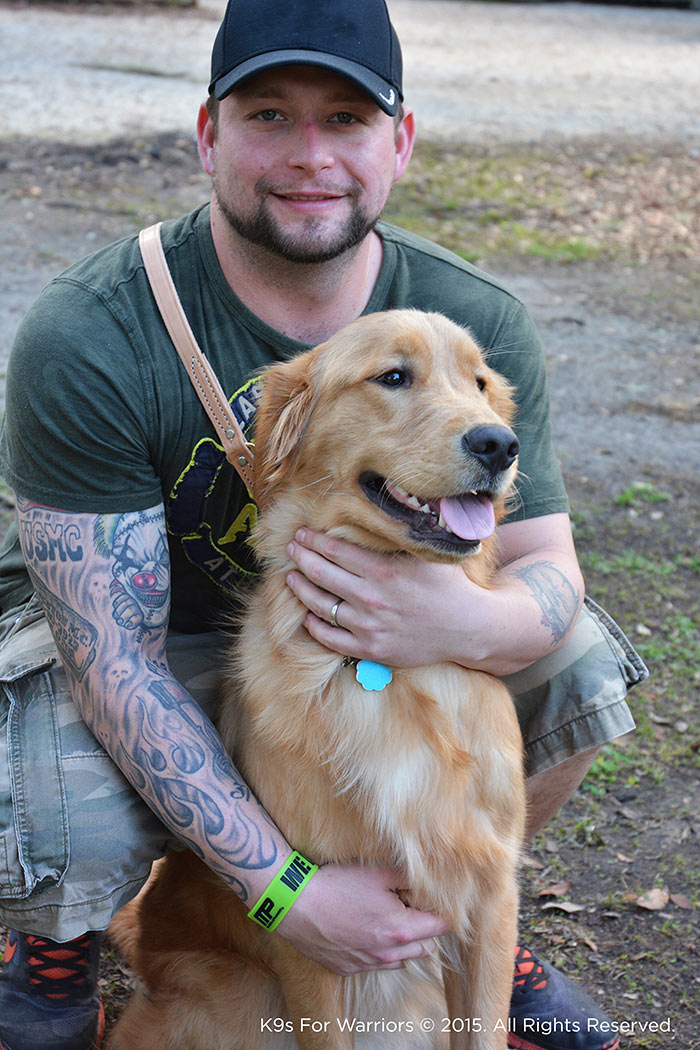 A Kup Of Healing

There were weeks when veteran Chris Langston didn’t leave his bedroom; months when he didn’t set foot out of his house. When he did venture out, he self-medicated with drugs and alcohol just to function. And then there were the nightmares.

“I was terrified to go out in public in the day. I was scared to sleep at night because of the nightmares,” says Langston, a former Marine who served in Iraq and now lives in Starke, just northeast of Ocala. “So I would stay up all night and sleep in the day.”

Finally, at the urging of his wife, Vivian, Langston went to a VA doctor. Diagnosed with PTSD, he was at one time taking 22 medications, including pain meds for a back injury incurred during his time in Iraq.

“The meds really didn’t help the PTSD, and I was addicted to the pain pills,” says Langston. “Over the years, it just got worse. I couldn’t be a good husband or father to my children. Finally, one day I just got tired of being sick and decided to do something about it. I got off the pain meds, starting going to the gym and regular counseling. That was in January 2013.”

Two months later, Langston found out about K9s For Warriors.

“A cousin heard a radio commercial about K9s For Warriors and told me about it,” he says. “I had grown up with dogs, so I decided to look into it. After I checked out their website, I applied right away and was accepted.”

Once at the K9s For Warriors facility, Langston was paired with a 1-year-old golden retriever named Kup.

“We bonded instantly,” says Langston. “We were attached nearly 24/7 for those three weeks of training. Just having Kup with me made me feel so much better.”

And once home, Langston’s life has continued to improve.

“For the first time in such a long time, I can handle going out in public because I know Kup has my back,” he says. “When he senses that I’m anxious, he nudges me and makes me focus on him and that calms me down. When I have a nightmare, he puts his paw on my chest and licks me until I wake up. Thanks to Kup, I can enjoy life again.”

Post-traumatic stress disorder is a psychiatric disorder that can occur after going through a traumatic event, such as combat exposure, child sexual or physical abuse, terrorist attacks, sexual or physical assault, serious accidents or natural disasters. Symptoms usually start soon after the traumatic event but may not appear until months or even years later. To be diagnosed with PTSD, a person must meet the symptoms criteria in the Diagnostic and Statistical Manual of Mental Disorders (DSM-5), which is published by the American Psychiatric Association. A PTSD diagnosis is based on having the following three types of symptoms for at least one month: re-experiencing, avoidance and numbing, and hyperarousal.
Posted in Marion Features