How the City of Ocala is making strides to replenish one of our most essential resources through the creation of a monument to the natural world. 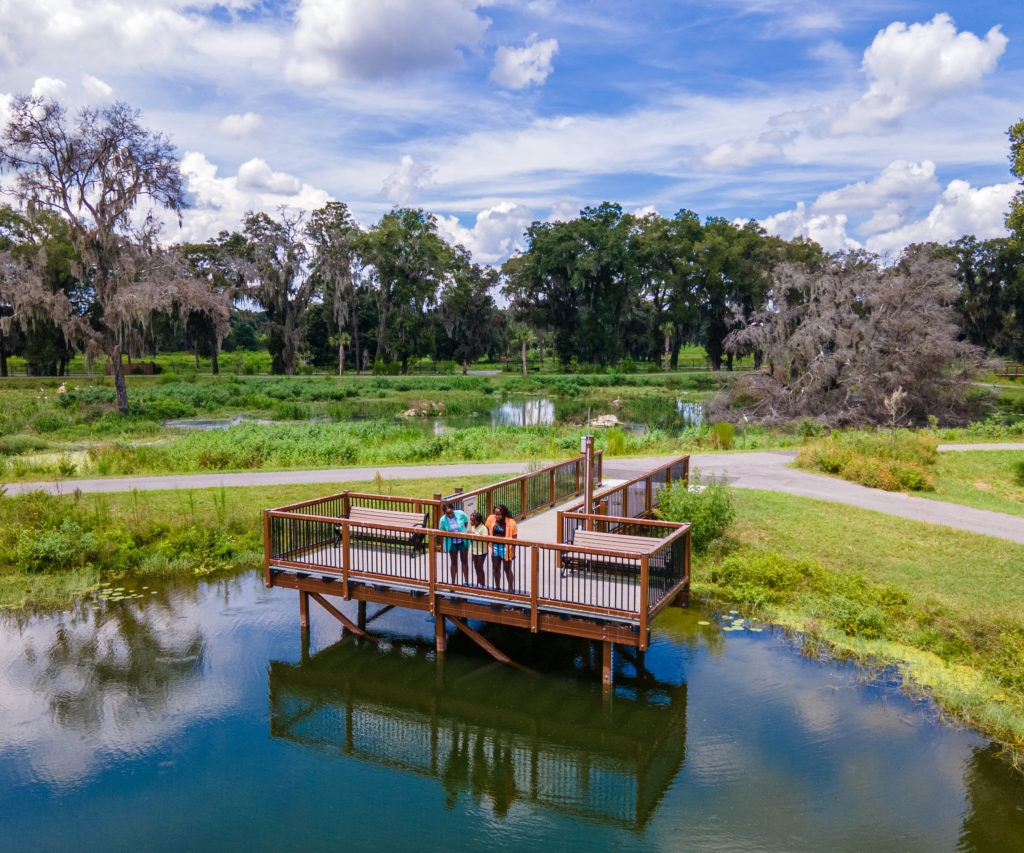 Water is the driving force of all nature. It is vital to the survival of every single human, animal and plant on the earth. On our most elemental level, water makes up 70 percent of the human body. It covers 71 percent of our planet’s surface and is an essential element of both our natural ecosystem and our social system. It regulates our climate, allowing some ecosystems to flourish, and is a major limiting factor for others. Water is the key to our food supply and creates essential habitats for wildlife. We rely on fresh water for our most basic needs of drinking, cooking, bathing, and sanitation. We also delight in its more ethereal benefits, such as recreation, healing and relaxation. Water is a magical, moving, living part of the earth and a resource that we depend upon in ways we seldom think about. But think about it, we must.

“All the water that will ever be is, right now.” National Geographic magazine proclaimed this in their 1993 “Water” themed issue. Their point in making such a stark statement is that the earth’s supply of water is limited. Our population continues to grow and, as it does, the demand for water increases, as does the quantity of waste water we produce. Therefore, at some time, we will reach a point where the demand will exceed the available fresh water supply. And this is not centuries into the future. We are closer to that point than most of us might imagine. However, the quote is also often used to express that although water is a finite resource, it is a renewable one.

Florida is surrounded on three sides by water and has a multitude of surface streams, lakes, wetlands and coastline. This creates a perception of abundant and seemingly infinite water supplies. In reality, there is a critical need for us to conserve those supplies and plan for how we will meet our future needs.

According to the Florida Office of Economic & Demographic Research, over the next 20 years the statewide demand for water is projected to be 7.5 billion gallons a day as the population increases to a projected 25.2 million people. The City of Ocala currently consumes on average 12 million gallons of water a day and 6 million of that is used for irrigation, which contributes to water pollution through runoff. As our local population rises, so too does the usage and pollution. 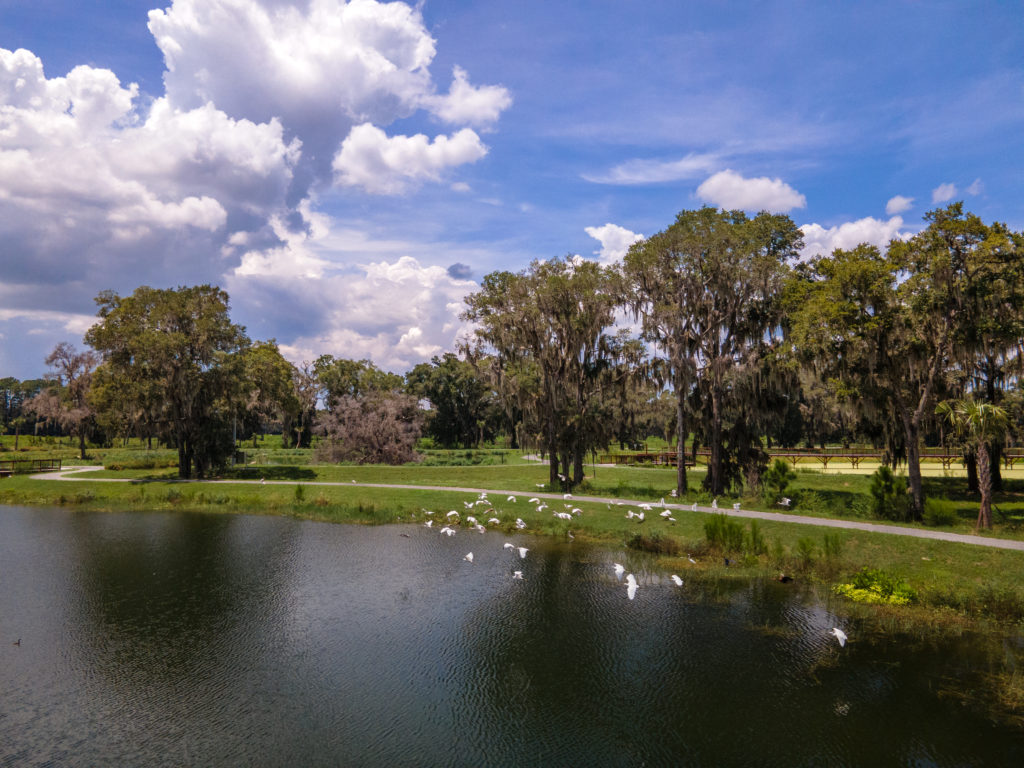 Throughout the state, communities like ours have been grappling with crafting solutions to the impending issue. Dee Ann Miller, spokeswoman for the Florida Department of Environmental Protection, explained that expanding supplies in the future will require a combination of approaches, including “the use of existing water supplies, water conservation and the development of additional alternative water supplies as well as projects that recharge our aquifers.”

The City of Ocala has been working proactively on several projects to not only meet the future demand, but also protect our wildlife and natural resources. City leaders have demonstrated their forward-thinking strategy with a project that addresses both of those issues by creating a system that improves water quality while increasing groundwater supplies. The Ocala Wetland Recharge Park located near Lillian Bryant Park, at 2105 Northwest 21st Street, is a 60-acre refuge with 2 1/2 miles of paved walking trails, boardwalks, three ponds, wildlife overlooks, hands-on educational exhibits and educational kiosks. But this is no traditional park. It is a manmade wetland created with this purpose: recharging the underground Upper Floridan aquifer with an average of 3 million gallons of naturally filtered stormwater and treated wastewater every day.

By this point, you may be wondering what exactly the term “recharge” means in this instance. Simply stated, groundwater recharge is a process where water moves downward from the surface and drains through the soil to refill the groundwater. Artificial recharge (which is the process being employed at the park) is a process by which stormwater and reclaimed water is purposely directed into the ground by altering natural conditions to increase infiltration. The water has undergone a series of treatment steps during which its composition changes—including removing nitrogen and phosphorus. The goal of the process is to help replenish the aquifer below, which also feeds the Silver Springs system. 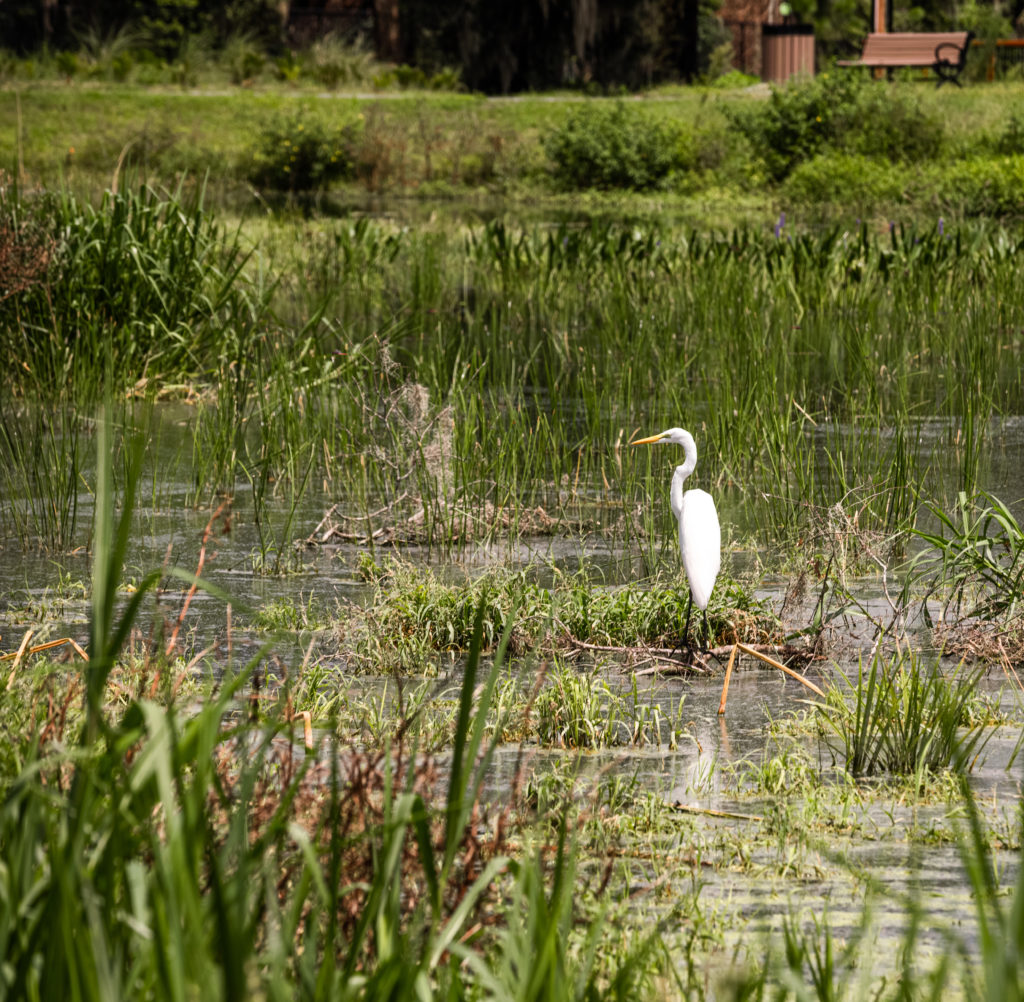 Artificial recharge is an effective way to store water underground and create a surplus to meet demand when a shortage might be imminent. The water recovered from these recharge projects can then be allocated to non-potable uses such as landscape irrigation and although not as common, to potable use. By developing and operating the park, the City of Ocala has created a way to efficiently use its water resources.

“The Ocala Wetland Recharge Park allows the City of Ocala to efficiently use its water resources,” Ocala Mayor Kent Guinn commented at the groundbreaking ceremony. “By developing this park, the city will create a wetland ecosystem, improve water quality, boost regional groundwater supplies and provide numerous recreational opportunities for the community.”

Creating a setting to attract wildlife and improve the natural resources of the area was a key aspect of the project.

“One of the purposes is to have a place where the community can enjoy nature,” explains City of Ocala Water Resources Conservation Coordinator Rachel Slocumb. “It will be a nature oasis—definitely unique to Ocala. There aren’t many wetland parks in Florida.”

In fact, in the past, wetlands were largely regarded as wastelands and places to be avoided. Often, they were treated as dumping grounds or were drained and filled in. The U.S. Fish and Wildlife Service published a study in 1990 which revealed that more than half of the 221 million acres of wetlands that once existed in the lower 48 states in the late 1700s had been destroyed. 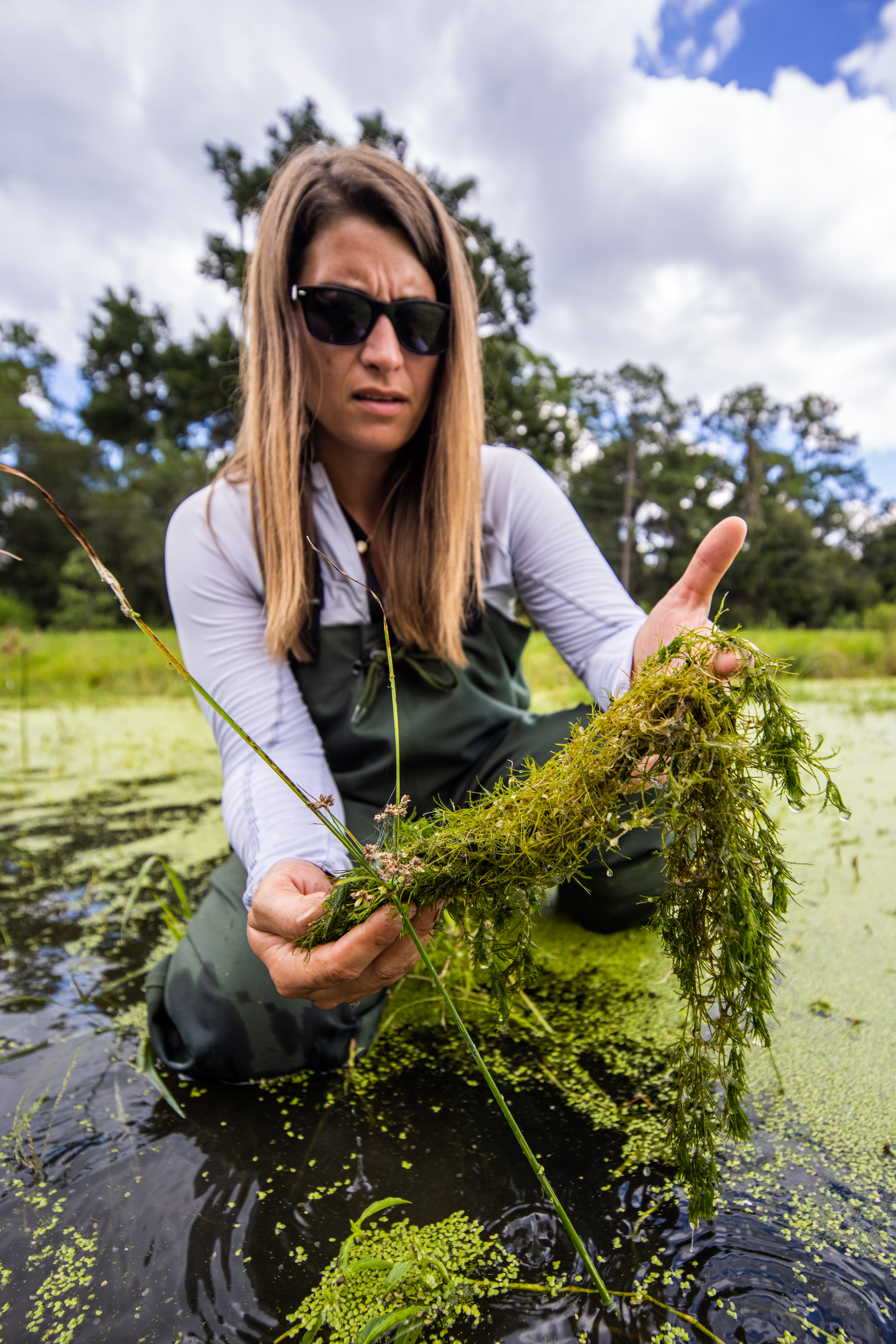 These days, we understand the important role that wetlands play in our natural world and that they provide habitats for a wide variety of birds, fish and other wildlife. In fact, the park in Ocala has the potential to become a true bird watching destination with a variety of ducks, woodpeckers, waterfowl, hawks and many other species of birds on display.

Among the ancient oaks and ponds as deep marshes, there is an incredible display of Florida plant life, with a plethora of distinct plant species, many of which can only survive in a wet environment.

But the park is more than just a place to connect with nature—it’s a monument to our city’s commitment to our environment. A few other similar wetland parks can be found scattered throughout Florida, each creating an abundance of green space and enhancing the neighborhoods around them.

The overall response from the people living near the park has been very positive and the wetlands park has been embraced by community members, according to city officials.

Community advocate, retired educator and former principal at four different Ocala/Marion County schools, Scott Hackmyer, offered this praise for the project: “The City ought to be complimented for a great vision that will develop into a great asset for our community.”

So, whether you crave a relaxing walk and few moments to unwind during this stressful time, want to learn more about this innovative park or are in the mood for a little bird watching, an oasis awaits you at the Ocala Wetland Recharge Park.

Nearly everything we do, from generating electricity and engaging in manufacturing to growing food, has the potential to release pollutants into our environment. The U.S. Environmental Protection Agency (EPA) identifies two broad categories of pollution: point-source and nonpoint-source.

According to the EPA, point-source pollution is any contaminant that enters the environment from an easily identified and confined place. This includes such examples as smokestacks, discharge pipes and drainage ditches, which affect both air and water. Although there are many examples of point-source pollution, the defining factor is that it comes from a single identifiable source.

Nonpoint-source pollution is the opposite. This type of pollution comes from many sources, all at one time, and is carried by surface runoff to natural water sources. A prime example would be how during a thunderstorm a collection of pollutants is washed off streets, sidewalks, roofs and other surfaces into the sewer system. Common types of nonpoint-source pollution, for example, could be oil leaked from a car, rubber from a blown tire, trash and dog waste. But pollutants can also include bacteria and waste from livestock, sediment from construction sites, and excess fertilizers, herbicides and insecticides from farms and residential areas, to name a few.

Surface runoff is the flow of water that occurs on the ground surface when excess rain or storm water cannot rapidly infiltrate the soil. As the runoff moves, it picks up and carries away natural and human-made pollutants and deposits them into lakes, rivers, wetlands, coastal waters and ground waters.

Non-point stormwater pollution is a huge issue and the leading cause of water pollution in the United States. It has been documented to have harmful effects on drinking water supplies, recreation, fisheries and wildlife. As there is no single identifiable culprit, it is hard to regulate.

For more information, visit www.ocalafl.org or contact City of Ocala Water Resources Conservation Coordinator Rachel Slocumb by email at rslocumb@ocalafl.org or by calling (352) 351-6774.