One of the saddest sights in life is a homeless dog or kitten wandering the streets. Until three years ago, unwanted animals in The Villages and surrounding area were often picked up and eventually euthanized if an owner couldn’t be found.

Enter Barbara Irwin, a dynamo of energy whose name has become synonymous with rescuing dogs and cats in Lake and Sumter counties. Her passion to help animals became a grassroots effort known as Pet Lovers Rescue, a charitable organization totally run by volunteers.

Pet Lovers Rescue indeed rescues unwanted dogs and cats, but it’s so much more. The group prides itself on finding loving homes for companion animals.

Before moving to The Villages in 2005, Barbara volunteered and ran the Preservation of Animal Welfare & Safety (P.A.W.S.) adoption center in Harrisburg, Penn., for nearly 13 years. She knows what it takes to facilitate successful adoptions for dog and cat lovers.

“You can usually sense what is going to be a right and acceptable match,” she says. “For instance, we would never put a young kitten with an elderly senior because kittens generally have too much energy.”

The success rates for Pet Lovers Rescue’s adoptions speak volumes about the work that Barbara and her volunteers have accomplished. In the 2006-2007 fiscal year, 565 cats and 75 dogs were rescued, given shots and medical attention, and placed in good homes. The numbers for the first quarter of 2008 are growing even faster. In the 16 years that she’s been matching dogs and cats with new own-ers, Barbara has had only four animals returned.

The thorough adoption process that Barbara instituted for the organization accounts for much of its success. Prospective owners complete an application and are interviewed by Barbara.

“I talk to people at length and respond to questions and comments on their applications,” Barbara says. “I spend time matching the pets to what they want.”

The new owner also signs a contract that specifies the animal will get follow-up vaccinations and spaying or neutering if that hasn’t already been done. Most of the animals that are rescued receive ini-tial shots and medical attention from Country Oaks Veterinary Clinic, which partners with Pet Lovers Rescue.

“I set up the appointments with the vet before the new owners leave with the animal,” says Barbara. “I also call to follow-up and see how the animal is doing.”

She also keeps a copy of the pet’s medical records and calls several times to make sure the animal and new owner are bonding. Barbara has even been known to take back pets if the new owner dies or becomes unable to care for it. 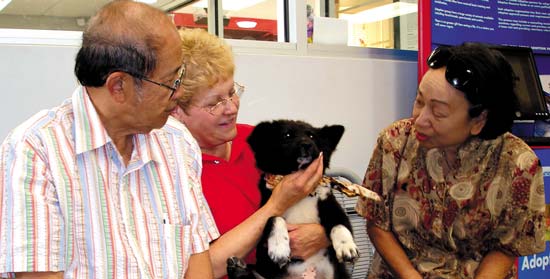 Fostering by volunteers is also a key component. Currently, Pet Lovers Rescue has 35 foster “moms” and “dads” who provide temporary homes to cats and dogs who are awaiting permanent adoption.

Tony and Fran Hunt of The Village of Belvedere fostered three dogs for two weeks each after their dog of 14 years died.

“We did it to see if we really wanted another dog,” says Fran, holding her permanent adoptee Toby, an 8-week-old Maltese and Shih Tzu mix. “Now that we have Toby, we probably won’t foster dogs, but we’ll continue to be involved with Pet Lovers Rescue in other ways.”

Barbara says the foster parents love animals, but for a variety of reasons they can keep one for only a short period of time. Nevertheless, they provide an invaluable service for the organization.

“The foster teams socialize the animals to be around people and other pets,” she explains. “The mindset of the volunteers is to help prepare the rescued dog or cat to go into a good home.”

The foster parents also see the animal’s personality and that helps Barbara match it to the right kind of owner.

“She’s mellow like me,” says Estrella Urbi of The Village of Glenbrook who adopted Louise, a black and white collie puppy, in April. “I missed my large retriever who is with my son in Minnesota, but I needed a smaller dog that is calmer.”

When visitors see the Pet Lovers Rescue adoption center that is housed in the Petco Store in Rolling Acres Plaza on US Hwy 441, they may think those are the only animals available. Quite the contrary, explains Barbara.

“Most of our animals live in foster homes,” she says. “And our biggest need is finding enough foster homes for all the animals that are rescued, especially during the spring and fall.”

Last year, Petco invited Pet Lovers Rescue to take over its adoption center and provides space to Barbara’s group free of charge. Volunteers come in daily to clean the cages and play with the animals for a few hours. The last thing Barbara does every night is call her evening volunteers to make sure all of the animals are okay before the store closes.

“I’ve enjoyed my work with Pet Lovers Rescue more than I ever did my former job,” says Barbara, a former Hershey Food Corporation employee. “This is my calling and my passion.”

Pet Lovers Rescue is adamant that responsible pet owners have their dogs and cats spayed and neutered. A look at these statistics from the Humane Society of the United States shows why:

4-6
Average number of kittens in a feline litter

6-10
Average number of puppies in a canine litter

Pet Lovers Rescue is a 501(c)(3) organization and always needs donations of food and litter, and volunteer help for the adoption center. Call Barbara Irwin at (352) 598-1588 or stop by Petco in Rolling Acres Shopping Plaza near The Villages.