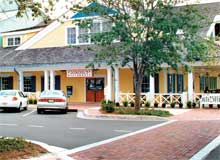 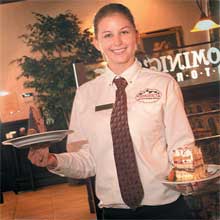 When Dominic’s Ristorante General Manager Basil Kaspar began hosting wine pairing dinners for The Villages fast-growing wine clubs last year, he was surprised how much interest the events created among his other customers.

“Guests were seeing the special courses prepared for the wine dinners being taken into the back dining room, and they would say ‘I want one of those’’” explains Kaspar who has been at Dominic’s since it opened in 2005. “We responded by offering regular wine dinners that are open to the general public.”

If you’ve ever thrown a formal dinner party for 50 or 60 people, you certainly understand how much planning goes into such an event. Kaspar and Executive Chef Ricardo Cardenas work weeks in advance to make sure every detail is right and that the selected wines will enhance the food.

“The wine dinners give us a chance to be creative,” explains Ricardo. “I play around with ingredients until I come up with something special.”

Although I had attended several wine dinners at Dominic’s in the past, I did not realize how much coordination and work went into the process. I accompanied Bill Biebesheimer, president of one of The Villages wine clubs, to a meeting with Basil and Ricardo to discuss menu, pricing, and wines for a March dinner. The dinners range from $45 to $60 per ticket.

The March wine pairing event was a richly satisfying (and educational for wine aficionados) dinner that truly did show off Chef Ricardo’s talents. In addition, wine consultant Frank Esposito was on hand to talk about each wine as it was served and why it was selected for a particular course.

We began with baked jumbo scallops wrapped in bacon and served over a creamy vodka sauce that had a hint of pesto. Although scallops can sometimes be bland, this dish was rich and full of flavor, especially when perfectly matched with a 2006 Le Rive Chardonnay from the Venezia-Giulia region of Italy. The wine, which is not on Dominic’s current menu, was more similar to a Pinot Grigio than a Chardonnay, according to the wine consultant who said it’s being considered for Dominic’s wine list.

A salad of mixed greens, grilled Portobello mushrooms, and fresh mozzarella cheese was paired with Ca Montebello Bonarda — a light sparkling red wine from Italy’s Lombardi region. Although the wine is not well-known in the U.S., it’s very popular in Northern Italy. Dominic’s is the only restaurant in Florida to offer Ca Montebello Bonarda, sold for about $41 per bottle. The intense notes of cherries and berries were delightful, but did not match as well as expected with the balsamic and gorgonzola cheese in the salad.

Everyone at my table agreed, however, that the wine was perfectly wonderful alone. The vibrant ruby red wine is a blend of Croatina and Rara grapes found only in Lombardi and Argentina. It can be paired with all types of Italian dishes and is an excellent choice if you want a lighter wine with your meal.

The highlight of the evening was the rack of lamb topped with a cabernet demi-glaze, served as the main course with a side dish of veal and sage ravioli topped with a mushroom marsala sauce. Roasted potatoes and garden-fresh zucchini, yellow squash, and broccoli also accompanied the course. Although it was a group dinner, Dominic’s servers were very accommodating to diners who let their preferences for rare or well-done lamb be known.

“I didn’t think I liked lamb,” one dinner guest exclaimed, “but this is so good that I want to pick it up and clean the bone!”
And she did.

The lamb was served with a 2003 Cantina Tudernum Cabernet that is served regularly at Dominic’s both by the glass ($8.50) and by the bottle ($32). From the Umbria region, the wine has a bouquet of ripe plums and toasted vanilla. This big, bold wine was an excellent choice because it stood up to the smoky grilled lamb.

Chocolate Mascarpone Delight is becoming one of Dominic’s signature desserts during wine dinners because it is easy to pair with a variety of wines. The simple-yet-elegant chocolate cups are filled with sweetened mascarpone cheese, topped with fruit, and surrounded by a raspberry coulis.

Diners didn’t know it but they were auditioning the unusual dessert wine that accompanied the dish, a 2005 Oltrepo Pavese Sangue di Giuda.

“We’re testing this wine,” Frank later said. “It’s a big hit wherever I go to give wine seminars.”

Frank also explained that the full-bodied sweet wine tastes completely different with aged mature cheeses. With a slight effervescence, the wine had an unusual flavor that paired well with the final course of the evening.

“If you’ve never been to a wine pairing, this is a really great experience,” says Basil. “You get to enjoy the creative dishes and you also learn so much about the wines and the regions where they came from.”

Although Dominic’s wine dinners are fun, festive, and delicious, the classic family-style menu choices bring me back again and again.  The Tuscan-decorated dining room is a warm, relaxing place where after a long day, my husband and I can always count on a good meal with attentive service. In addition, live jazz softly accompanies your meal from 6pm to closing.

Our favorite pasta dish is a simple rigatoni with homemade tomato sauce full of fresh, chunky tomatoes for $9.99. Penne, spaghetti, or angel hair can also be ordered with the same tomato sauce that is punctuated with fresh basil, garlic, and olive oil. Recently, our waiter, Kres, warned us that it’s not like a usual marinara sauce. We assured him that, yes, we knew it was full of fresh tomatoes and was not pureed like those you get in most Italian-chain restaurants. It’s identical to a pasta sauce that we had repeatedly in Southern Italy a couple of years ago and is very similar to the one that my husband’s grandmother used to make. So far, Dominic’s is the only place we’ve ever found such an authentic Italian pasta sauce.

My other all-time Dominic’s favorite has to be the house salad with gorgonzola balsamic vinaigrette. The grape tomatoes and spring mix are always fresh and filling. My husband usually opts for the soup of the day, and a hearty vegetable soup was a recent choice. The beef broth was full of chunky carrots, tomatoes, peas, and celery. My husband likes his soups a little saltier than I do, and the Dominic’s version definitely fits his Italian taste buds. Prices for soups and salads at Dominic’s range from $2.99 to $7.99 each.

Recently, I tried a pasta-combo special, which featured meatballs in marinara, baked rigatoni, and eggplant stuffed with ricotta cheese.  Although it was all delicious, my favorite was the stuffed eggplant, the item I really did not expect to like. My only regret about the $12.99 special selection was that it was not a regular menu item.

Of course, we couldn’t leave without splitting a piece of Dominic’s authentic signature dessert: homemade tiramisu. The Dolci menu describes it as “the way Mom used to make it,” and it is. The scrumptious treat made with lady fingers, mascarpone cheese, cream, espresso coffee, sugar, and cocoa is the most expensive of Dominic’s desserts at $5.50 but is worth every penny. And it’s definitely large enough to share — not surprising for the “dessert of love” as an Italian legend calls it.

We completed our meal with a glass of the house red wine, a Banfi Sangiovese that pairs well with all the pasta selections and is only $3.50 a glass.

Try Dominic’s for lunch or dinner and maybe one of my favorite restaurants will soon become one of yours.

Folks in Ocala liked their taste of Dominic’s at the recent 19th Annual Taste of Ocala. The restaurant won first place for overall appearance and second place for overall food quality during the event that was sponsored by the Central Florida Community College Foundation in April.

It was the first time the restaurant competed in Taste of Ocala, which featured foods from 50 different restaurants and attracted approximately 3,000 people.

“The exposure was important to us for two reasons,” said General Manager Basil Kaspar. “The first is that the overall appearance award was done by impartial judges. And the second reason is that the general public voted for overall food quality award.

“For us to take that recognition meant a lot to executive chef Ricardo Cardenas and the staff,” he said.