This Mount Dora eatery is just a short walk up a flight of stairs into a glittering array of movie star photos. It boasts a menu of elegant, gourmet meals along with some of the best cheesecake in Lake County.

So, it must be a bit pricey, right?

Wrong. The food is free at Gary Hagen’s House of David Upper Room Café on the second floor of downtown Mount Dora’s Renaissance Building. Gary asks only for a donation. Small wooden boxes with slit openings sit on the tables for customers to drop in any amount of cash, if they so choose. And the boxes accept more than just cash—they accept prayer requests, too.

“We don’t know how much money we’ll get every day because there are no prices,” Gary says. “We just believe God’s going to provide. He’s been doing it ever since we opened.” 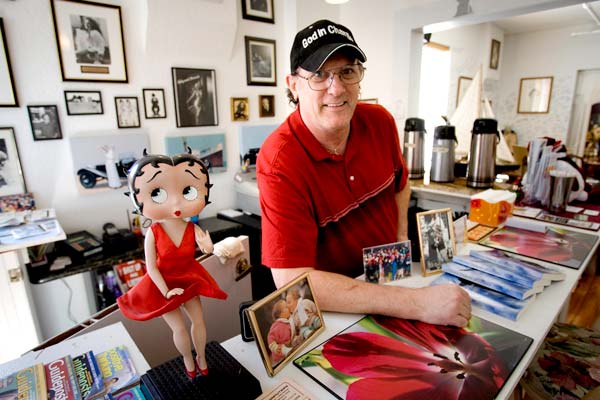 Gary believes in a “God presence” he feels within himself. He says it’s this presence that told him to take prices off his menu soon after he opened in 2006.

A chef by trade, he cooked for some local restaurants when he first arrived in Mount Dora two years ago, but the low pay left him financially strapped.

“I was living in my car for about two months,” he says. “God spoke to me and told me he wanted me to open this place up, so I wrote a check to the landlord with money I didn’t have.”

“Guess what?” Gary offers. “The bills got paid.”

He also has a large variety of salads, fresh-baked quiches, omelets, pancakes, waffles, and an assortment of homemade cheesecakes. Gary makes everything from scratch. Scriptures are listed on his menus.

Gary had prices on his menu when he launched the breakfast-lunch-dinner eatery, formerly known as the Hollywood Cheesecake Café.

“God told me to take the prices off the menu to show people that we are not in control of our lives—He is,” Gary says.

As a spiritual man, Gary always offers prayers over the food. He attracts both regular lay people and men of God.

“Pastors, rabbis, priests, bishops—they all come in and speak to me,” he says. “The whole restaurant’s about God’s love. He wants people to actually see it.”

One of those customers is Moses Robbins, pastor of New Season Christian Fellowship in Eustis, who enjoys the food and visits once or twice a week.

“When Gary took the prices completely off the menu, that took a lot of faith,” says Moses. “It’s the opposite of what an American business would do. It’s completely contrary. 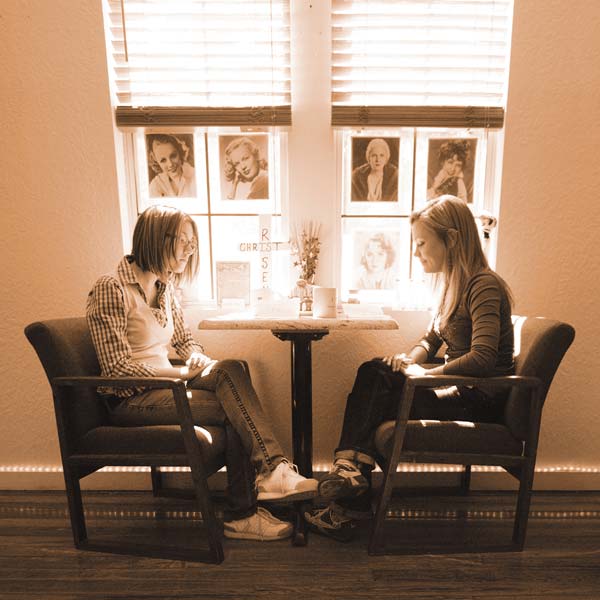 Friends take a moment to reflect while enjoying some free time at The House of David Upper Room Café in Mount Dora.

“Plus, the food is outstanding,” he adds. “You’ve got to have his cheesecake. It’s heavenly.”

Sean Gebhard started working with Gary about four months after the House of David Upper Room Café opened. A friend had told him about Gary’s ministry.

Sean is also a graphic artist, web designer, and video producer. Sometime in the coming months, the two want to open another location in Eustis.

Gary also supports charitable activities in other countries, like helping Asian-Indian orphans. He also helps the needy in this country, including single mothers and the disabled.

The restaurant is not, however, a place where you will get a sermon. Sometimes godly conversations come up. Customers otherwise simply enjoy their meals.

“I worked for the prison outreach program,” he says. “We would give prisoners books and bibles and preach to them.”

He chose Mount Dora, he says, because it reminded him of Carmel, California. From 1985 to 1992, Gary lived there, where he cooked for a number of celebrities.

“I did Jimmy Stewart’s 80th birthday party,” he remembers.

His restaurant features a Hollywood theme with photography of movie stars all over its walls. He also has a prayer wall.

Gary left California in 1992 because of the earthquakes. He experienced first-hand the San Francisco earthquake of 1989.

“Hurricanes are better,” he says of Florida. “You don’t have any warnings with earthquakes.”

And he likes his restaurant and believes strongly in his mission.

“We have a lot of fun here,” Gary says. “There’s no pressure. We know God will take care of us.”