We all know that Alexander Graham Bell gets credit for inventing and patenting the telephone, but that was hardly the extent of the Scottish-born scientist’s engineering innovations. You probably didn’t realize that Bell’s creativity was also behind the earliest incarnation of the airboat. Read on to find out more. 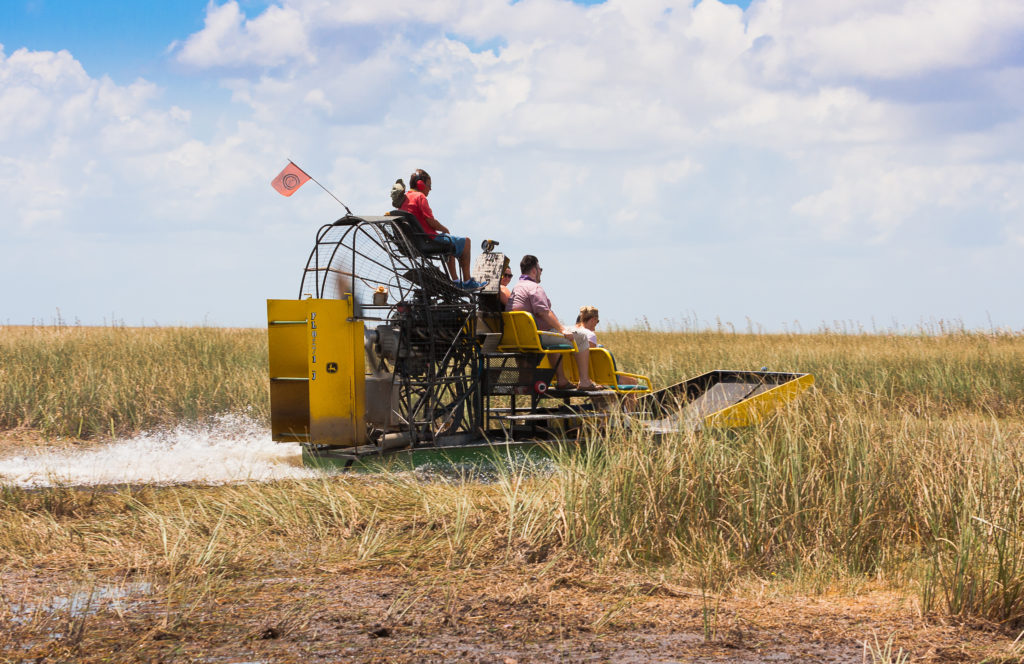 Inspired by the work of Italian inventor Enrico Forlanini, Bell worked with Frederick Baldwin on the concept of a “hydrofoil boat.” In 1919, Bell and Baldwin’s unique watercraft, the HD-4, set a world marine speed record of 70.86mph, a record that stood for 10 years.

Bell wasn’t the only person putting an aircraft propeller on a flat-bottomed boat in the dawning of the 20th century, though. As early as 1915, the British Army was utilizing airboats in World War I. A 1917 issue of Scientific American featured a depiction of a British Army airboat on the Tigris River.

Airboats didn’t make a regular appearance in the United States until after 1943, however. Determined to find an easier way to conduct research in the shallow wetlands of the Bear River Migratory Bird Refuge in Utah, the trio of Cecil Williams, Leo Young and G. Hortin Jensen put a 40-horsepower aircraft engine on a 12-foot-long, flat-bottomed, aluminum boat. Their design is more similar to what you find in today’s modern airboats than Bell’s hydrofoil.

A boat that can easily navigate through the shallowest of water quickly became a valuable military asset. And airboats are extremely versatile, running on water, marshland, mud, grass, ice, frozen lakes, snow and even dry ground.

Airboats were used by the Soviet Union in World War II and by the U.S. military during the Vietnam War. Today, they’re routinely used by the U.S. Coast Guard and government fish and wildlife departments in many states, as well as by governments and private citizens in countries around the globe.

Airboats have proven uniquely capable for rescue operations, as well. Just ask the thousands of people evacuated by airboats during Hurricane Katrina and, more recently, Hurricane Harvey, when airboat crews from across the country headed to Louisiana and Texas to offer assistance. With their flat bottoms and nothing below the surface to get hung up, airboats were able to skim over submerged obstacles that would have impeded the progress of other boats. In addition to water rescue, airboats are highly effective for ice rescue scenarios.

Say all you want about the craft’s efficiency for rescue and military use. What it really comes down to is that these boats are flat-out fun, and that’s what’s made them so popular.

You can get from point A to point B on the water in just about any boat, but there’s something to be said for how you get there.

“That’s where an airboat comes in. There’s a sense of freedom to an airboat. You’re skimming across the water; it feels like you’re flying, and you can venture into areas no other boat or vehicle can go,” says Norman Clifton, owner of GTO Performance Airboats (gtoairboats.com), an Ocala-based business that has been building airboats since 1992. Clifton confides that GTO stands for Good Time Outdoors, which is undoubtedly the whole idea behind airboats.

Nationally recognized for its manufacturing quality and the recipient of numerous awards, GTO builds 100-plus airboats each year. The company has sold airboats across the country and all over the world. Sales in July included an airboat purchase by the government of Thailand. 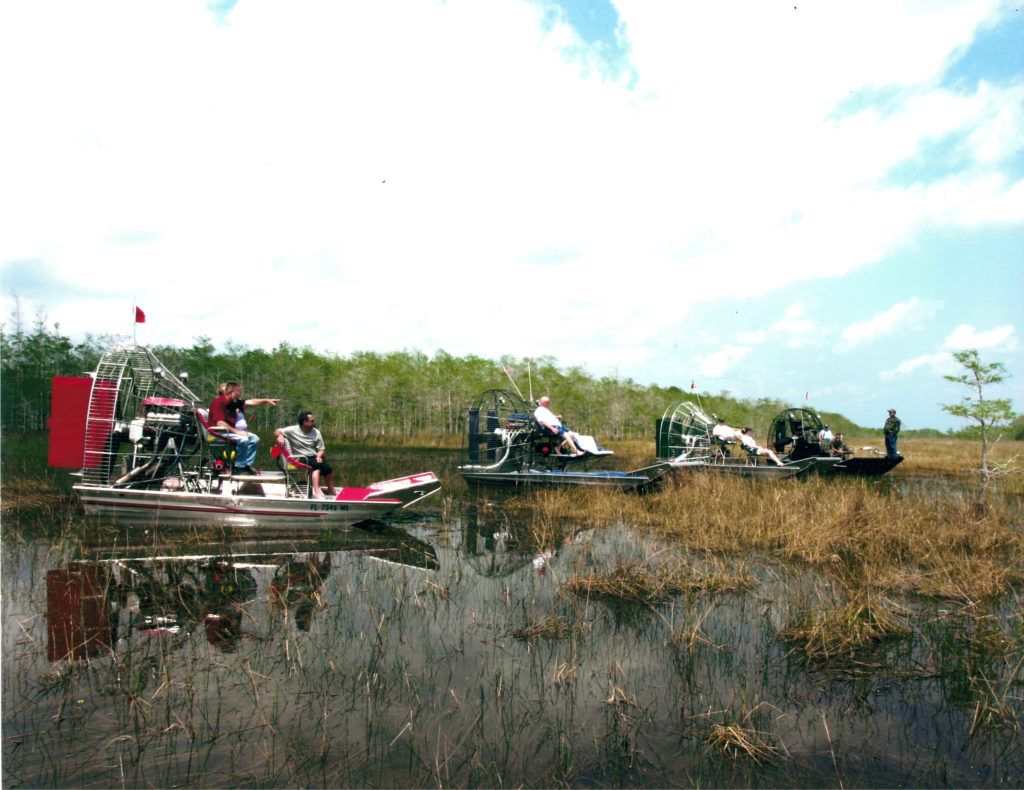 “Airboats are like the SUVs of the boat industry because they can be set up for whatever you want to do: fishing, touring, hunting,” says Clifton.

Home to several large airboat manufacturers, Florida is easily the airboat capital of the world. As of December 2017, there were 12,164 airboats (1,025 of them for commercial use) in the state.

In the simplest of descriptions, an airboat is a flat-bottomed vessel propelled by an aircraft-type propeller powered by an engine.

Just a couple of decades ago, you could buy a basic airboat for about $2,000, but as with modern automobiles, costs have skyrocketed. Modern airboats are available with plenty of bells and whistles, including everything from trolling motors and built-in fish coolers to stereo systems with Bluetooth and more, which means you can forget that outdated price tag.

Today’s commercially built airboats range anywhere from about $35,000 to $70,000, with some custom models running even higher. Options range from a 10- to 12-foot-long standard hunt/trail boat that holds two to three passengers all the way up to 32-foot-long touring boats that can accommodate 20 or more passengers.

No matter the size, the signature feature of any airboat is a propeller encased in a metal cage at the rear of the boat. That protective cage is meant to keep any objects from coming in contact with the spinning propeller. Unlike the earliest designs, which were made of wood, most of today’s propellers are made of carbon fiber due to its strength, durability and light weight.

That propeller is powered by either an aircraft or automotive engine. Although aircraft engines are still used, automotive engines have more readily available replacement parts and run on high octane automotive gas, which is less expensive than aviation fuel.

Modern airboat hulls are made of either aluminum or fiberglass. GTO uses the highest quality, marine-grade aluminum for all of its boats.

“When you’re building a boat that will be in salt water, you want stainless steel components and marine-grade aluminum hulls,” notes Clifton, who says it takes anywhere from 100 to 400 hours to build a boat from start to finish, depending on how elaborate the design.

Most airboats have two rudders, and owners often customize them with slogans and one-of-a-kind paint jobs.

“Cruising speed where you’re planing is about 28 to 30mph, but an average airboat can run over 50mph,” notes Clifton. “Race boats can go over 100mph, but those aren’t typical airboats.”

Unlike “regular” boats, the seats in an airboat are elevated and you sit atop the hull, not down inside it. This makes for unrestricted viewing, which is one reason airboats are so popular for ecotourism. There’s nothing quite like an airboat to get you into remote waterways where you can spot alligators and all manner of wildlife.

Any boat with an engine produces some level of noise. Most of the sound made by an airboat is related to the speed of the propeller, not the engine.

And let’s clarify something. Airboat owners refer to it as “sound,” never as “noise.” And that sound is noticeably quieter today than in earlier airboat models, thanks to mufflers, “reduction units” that reduce the propeller’s spin rate or revolutions per minute (RPM), and carbon fiber propellers that produce more thrust at a lower RPM.

Oh, and size matters, too. A bigger propeller turning lower RPMs has the same thrust as a smaller propeller running at a higher RPM but makes less sound.

“Sound has been reduced over the last 10 years due to improvements in propeller design,” says Clifton, who recommends wearing hearing protection whenever you’re operating or riding in an airboat. 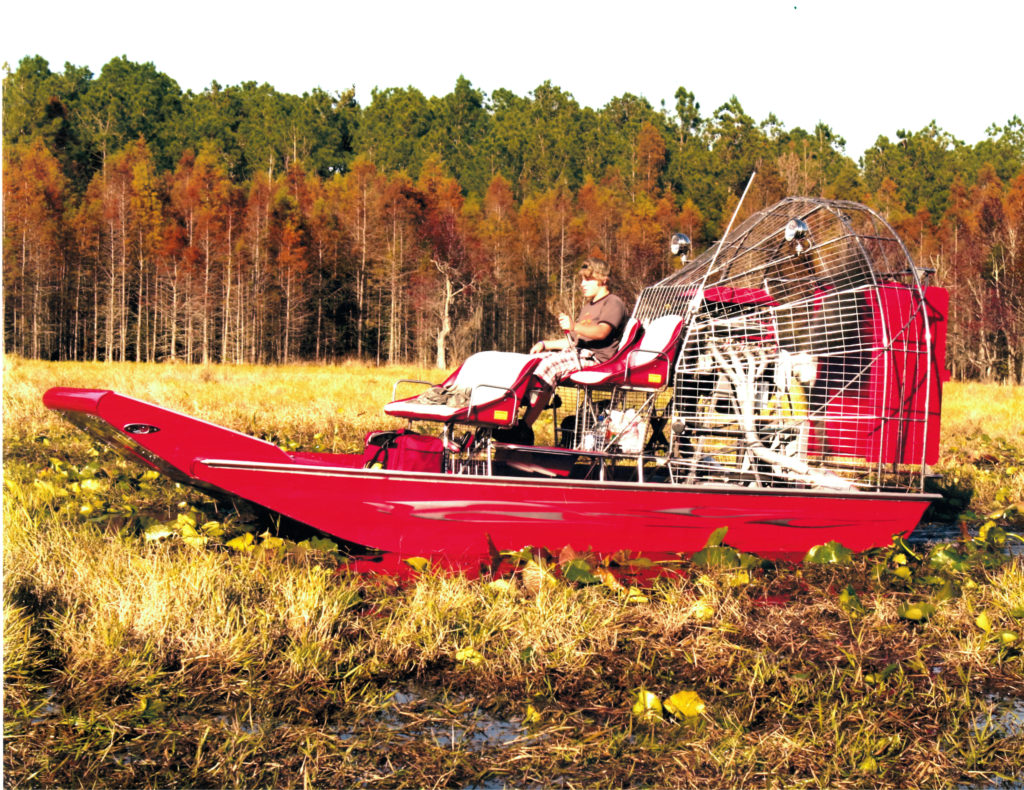 Florida state law requires that airboats have an automotive-style factory muffler “or other manufactured device capable of adequately muffling the sound of the engine exhaust.”

There’s no brake or reverse on an airboat. Control is all about the throttle and rudders, so turning, stopping and changing direction are highly dependent upon the skill of the operator.

In Florida, you must be at least 14 years old to legally operate an airboat.

As with any type of motor vehicle, safety features (life jackets, etc.) are important, but a skilled operator and informed passengers are key for having a safe, fun outing on the water.

One study showed that 64 percent of airboat accidents are due to operator error and typically involve lack of training/education, failure to use safety equipment and/or reckless behavior, including alcohol and drug use.

Clifton confirms that operator error is behind most accidents and adds that the airboats themselves can increase or decrease safety.

“In the past, there were a lot of homemade airboats but not as much now. There’s a big difference between factory built and home built when it comes to safety,” he points out. GTO and other reputable manufacturers build U.S. Coast Guard-certified airboats and provide warranties.

Florida law stipulates that “airboats fall under the same guidelines as other vessels in regard to safety equipment to be carried. All airboats operating on Florida waters must be equipped with a rectangular flag, at least 10-inches by 12-inches in size and international orange in color, which is displayed at least 10 feet above the bottom of the boat.”

Because of their “top heavy” design and shallow hulls, typical airboats are not suitable for use in rough waters or open seas.

For an on-the-water airboat experience, you may want to schedule an airboat tour with one of the following operators: