A brilliant blue sky frames the tower and empty grandstands at Gainesville Raceway. It’s a cold January morning made even more brisk by the sharp wind whipping across the track. The smell of race fuel and a heightened sense of anticipation fill the air as I climb into the seat of a Super Gas Firebird.

I’m wearing a full driving suit—flame-retardant pants, jacket, gloves, and head sock. The latter fits just like its name implies, snugly over my head and with only one opening for my eyes. One of the efficient pit crew members stuffs my hair into the back of my jacket before I slip on the helmet. He then proceeds to fasten me securely into the seat, making sure there’s no chance of me moving in any way I’m not supposed to. 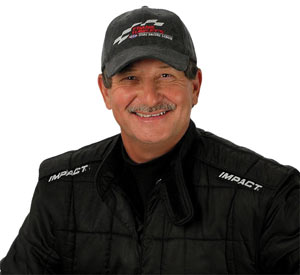 I glance over at Jimmy Montgomery behind the steering wheel before he straps on his own helmet—a custom one, I notice, and much fancier than my “standard issue” model. In addition to proving himself as a top mechanic on these cars, he’s also been racing for 20 years. Just like the Allstate commercial says on TV, I feel like I’m in good hands.

Jimmy presses the start button and the 720-horsepower engine roars to life. The car feels like a restless animal eager to be moving, and the seatbelt harness suddenly feels more safe than restrictive. We roll across the track and through the “water box,” a shallow puddle of water to remove any debris from the tires. Jimmy hits the gas and does a perfect burnout, which spins the tires and heats them up to get good traction in preparation for our run.

As our car rolls into starting position, the lights on the staging tree flash yellow. Moments later, the lights change from yellow to green and we’re off. I’m flattened against the seat back as the Firebird rockets down the track. We cover an eighth-mile in 5.798 seconds and hit 119.24mph. By the time we’ve gone a quarter-mile, we’ve “slowed” down to 96.72mph.

If I’d taken the full course, I would be in the driver’s seat, but I have to admit, I’m glad I’m not. The quaking engine opens up a world of thrilling, yet dangerous possibilities, but for once, I’m relieved someone else is in control.

Of course, getting behindthe wheel is precisely the reason most students take a class at the Frank Hawley Drag Racing School. After my visit, I can certainly see why.

Since 1985, more than 15,000 people—from Olympic medalists and professional athletes to everyday race fans—have signed on to learn from Frank Hawley, a two-time National Hot Rod Association world champion. Although the “need for speed” may be what motivates drivers to participate, Hawley covers much more than just the basics on how to drive a dragster. 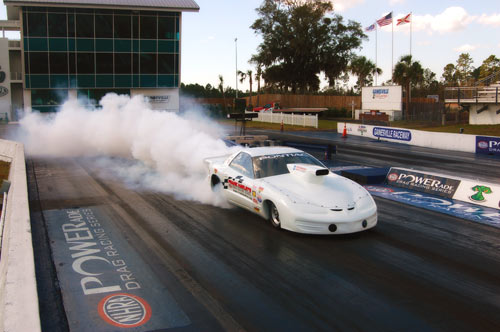 Students in the Super Class I attended spend two days at Hawley’s school located at the Gainesville Raceway. “Super” refers to the Super Comp Dragster and the Super Gas Firebird, and students pick which one they prefer to drive.

Although both cars have the same engine and transmission, the dragster is several hundred pounds lighter and more aerodynamic than the Firebird. The dragster will run a mid-eight-second quarter-mile elapsed time at about 160mph, while the Firebird (or “door car,” as some call it) runs mid-nine-second elapsed times at nearly 145mph.

The class includes time behind the wheel and in the classroom. Each driver gets six runs as part of the course, and additional runs may be purchased. Every run is videotaped and reviewed with Hawley, who coaches each driver on ways to improve. 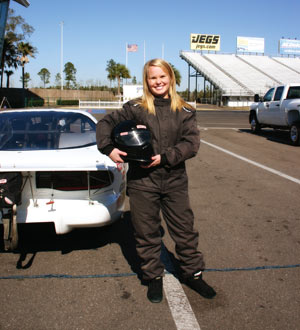 Hawley’s vast experience and personal attention are the big draws for most students. Not only does he teach the fundamentals of car control and safety, burnouts, staging, timing system, and proper track procedures, but psychology also is a big part of the lessons.

“Frank gets you thinking about things you haven’t thought about before. He teaches you ways to control your emotions and clear your mind before you go to racing,” says Wheeler Davis, 41, a seasoned bracket racer from Leesburg, Georgia, who took part in the January class in order to get licensed in the Super Comp Dragster.

“This is one of the best things that has happened to me in my racing career,” adds Davis, who has been racing for 15 years. “I recommend this to any racer who wants to improve, whether you’re a pro or a local bracket racer like myself.”

Kayla McClain, a 17-year-old from Andalusia, Alabama, came to the class to get licensed in the Super Gas car. Kayla has been racing junior dragsters since she was nine. Those cars typically run about 90mph, so it was a serious step up when she hit 152mph in one of her Firebird runs.

“I’ve learned a lot more about racing than I ever have before,” says Kayla, who admits the speed is what attracted her to racing. “The best thing is you’re not on your own, and meeting all these people is a lot of fun.”

In between runs,I walk out onto the track, bundled in my coat, to watch Hawley in action. Now in his mid-50s, Hawley began racing at 16, and it’s obvious why students come from around the world to learn from him. The man is calm, methodical, and good with people. Plus, he’s completely hands-on. Although a dedicated staff works to make sure the classes run smoothly, Hawley is part of everything that’s happening. 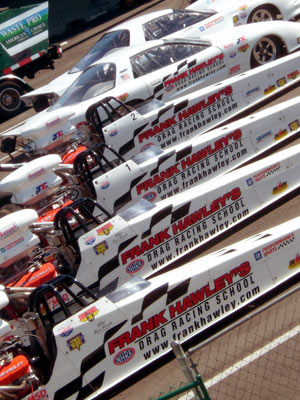 “We don’t consider this an adventure-type program just for amusement. We teach you to drive the car as if you’re going to compete,” says Paul Shields, who has been with the school for 15 years. “Every Saturday night here in Gainesville and at tracks across the country, cars like these compete in the Summit E.T. Bracket Racing Series. The Super Comp and Super Gas are two comp categories you would find at the NHRA Gatornationals.”

I watch as the next student pulls through the water box and does a burnout before his run. Each dragster is outfitted with racing slicks on the back end. These fat tires have no visible tread and are soft enough that you can actually press a fingernail into the rubber. The tires gain traction thanks to a compound that is sprayed on the track’s surface to make it sticky. Walking on the track feels like walking on glue. Shields says there are times the surface is so sticky, you can walk right out of your shoes.

Excitement mixes with anticipation as each student driver makes a run, but the smooth precision of Jimmy, Matt, and the rest of the pit crew keeps everyone feeling confident and on schedule.

“I get the best of both worlds,” says Jimmy after taking me for my ride. He’s been with the school for five years and races Super Comp Dragsters at least twice a month. “I get to turn wrenches and meet a lot of really cool people from all over the world.”

Personally, I find it amazing that a student with no previous racing experience can take this class and that there’s no upper age limit. The oldest participant was an 82-year-old from California who got licensed in both cars.

Hawley typically teaches two classes per month, and while Gainesville Raceway is the home base, the crew also loads the cars and equipment into trailers and takes the show on the road where Hawley teaches at other tracks around the country.

The psychology of the sport plays a big role in a driver’s success and is one of the things Hawley likes most about teaching.

“In the classes, I get a chance to talk about behavioral and philosophical things that apply to racing but also apply to other things,” he observes. “It’s just pretty exciting to drive the cars.”

I can see what he means. As I pull out of Gainesville Raceway that afternoon, my trusty F-250 feels safe and familiar, but 55mph seems oh-so-slow after a day of speed and adrenaline. Smiling, I press the accelerator a little closer to the floor and head for home.