Poor judgment and a tragic accident sent a young woman’s life into chaos. But she found a new way forward in an unexpected place that put horses back in her life, just in time. 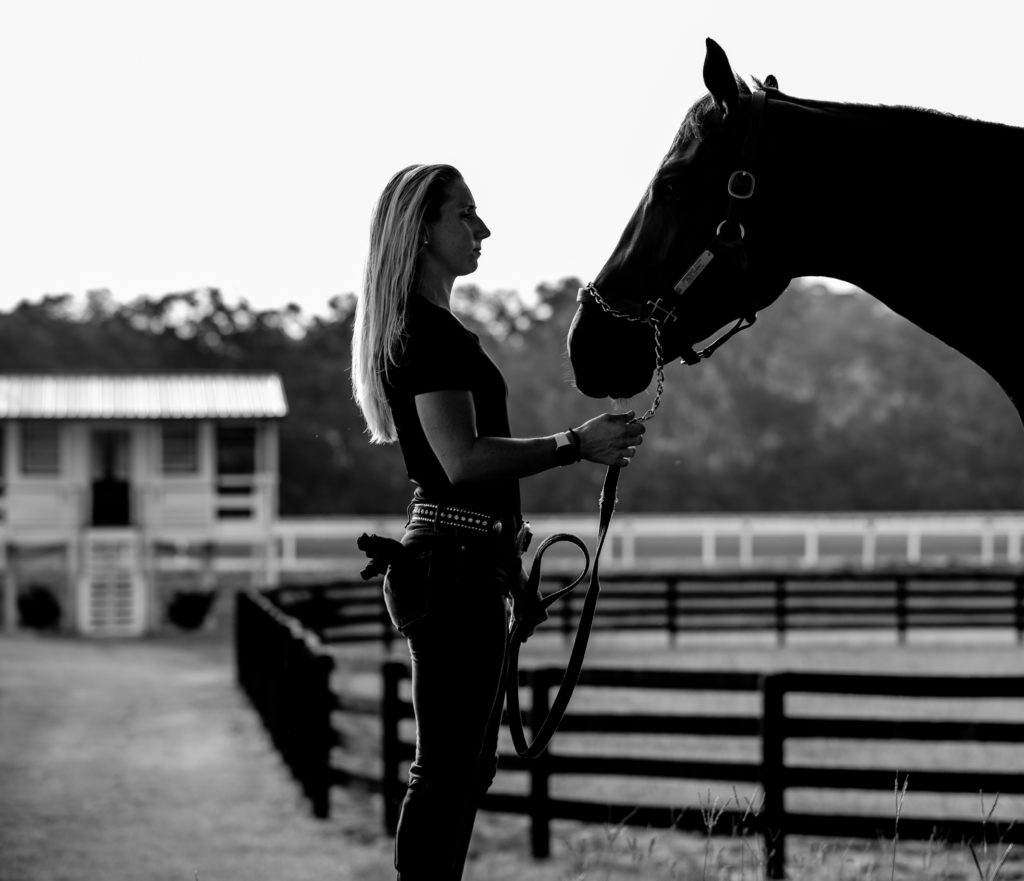 “When I got into high school, I fell in with a bad crowd; started drinking and partying every weekend. We had our party spots; we knew what bars wouldn’t check our IDs,” recalls Bandi, who grew up in the Tampa area. “When I graduated from high school, my grades had gotten so bad that college wasn’t an option for me. But I was going to a local community college and thinking about getting a nursing degree. Then on August 19th, 2012, my drinking and my recklessness caught up with me.”

After a night of drinking, Bandi, then 19, ended up at an ex-boyfriend’s house. She left at 6am, still intoxicated, to drive home.

“It was a very foggy morning, not that I’m making any excuses for what happened, but when I turned into my neighborhood, I never saw the motorcycle and struck it,” recounts Bandi, now 27, shaking her head at the still vivid memory eight years later. “The man flew off the motorcycle. I jumped out of my car and ran to help him. Drivers who had seen the accident called 911. From that moment on, it all became surreal.”

Given a blood alcohol test at the scene, Bandi’s blood alcohol concentration (BAC) level was 1.18 percent. In Florida, a person is considered driving under the influence (DUI) with a BAC level of .08 percent or more. She was arrested, booked into the Pinellas County jail and charged with DUI causing serious bodily injury, a third-degree felony. While Bandi was out on bail, the legal process played itself out over the next year. On July 3rd, 2013, she was sentenced to five years in prison. The motorcyclist, a 52-year-old man, was left a quadriplegic from the injuries he sustained.

“It was all so horrible, but I knew I had to take responsibility for what had happened,” Bandi declares. ‘Within days of my sentencing, I was sent to Lowell. Going to prison is humbling. Being in prison is humiliating.”

If going to prison can offer a bit of serendipity, Bandi being sentenced to LCI did. Before Bandi was a party girl, she was a horse-crazy girl.

“When I was 9, I started going to horseback riding camps,” explains Bandi, a petite blond whose bright hazel eyes give no hint of her past ordeals. “Later, I took hunter/jumper lessons at Windward Farms in Tarpon Springs. I even came to Ocala to compete in HITS (Horse Shows in the Sun, an annual multi-week equine competition). But when I started drinking, the horses dropped out of my life.”

As it turned out, horses were going to re-enter her life at LCI. Since 2001, the women’s prison has hosted the Thoroughbred Retirement Foundation’s (TRF) Second Chances Farm, which serves as a home for retired Florida-bred racehorses and as a rehabilitation center for LCI’s female inmates. The inmates participate in hands-on work experience with the horses and in an equine care technology (ECT) vocational program.

“It’s a great program to teach these women life skills, work ethic and a vocation,” reports John Evans, a lifelong horseman who has served as manager and vocational instructor of Second Chances Farm for 14 years. “A great many of the women come into the program with none of that, but I see a transformation in them as time goes on. If they apply themselves, they graduate with a great foundation to restart their lives once they’re released. Many of them go on to find work in the equine industry, but, even if they don’t, they have acquired important life skills.”

After her sentencing, Bandi became aware of the TRF program and was looking forward to participating in it. However, she was still considered a youthful offender at 20. She would need to wait a year before being classified as an adult offender and gain entry into the work camp unit.

“I was very disappointed that I had to wait a year before I could start the equine program,” offers Bandi, who, for a time, was housed with 70 to 100 women in one large common area of the general population unit. “But knowing that it was going to happen kept me going. While I waited, I started taking correspondent business classes from Adams State College.”

After a year, she was indeed moved to the work camp unit, where she shared a room with four other women. Most of them also participated in the Second Chances program. 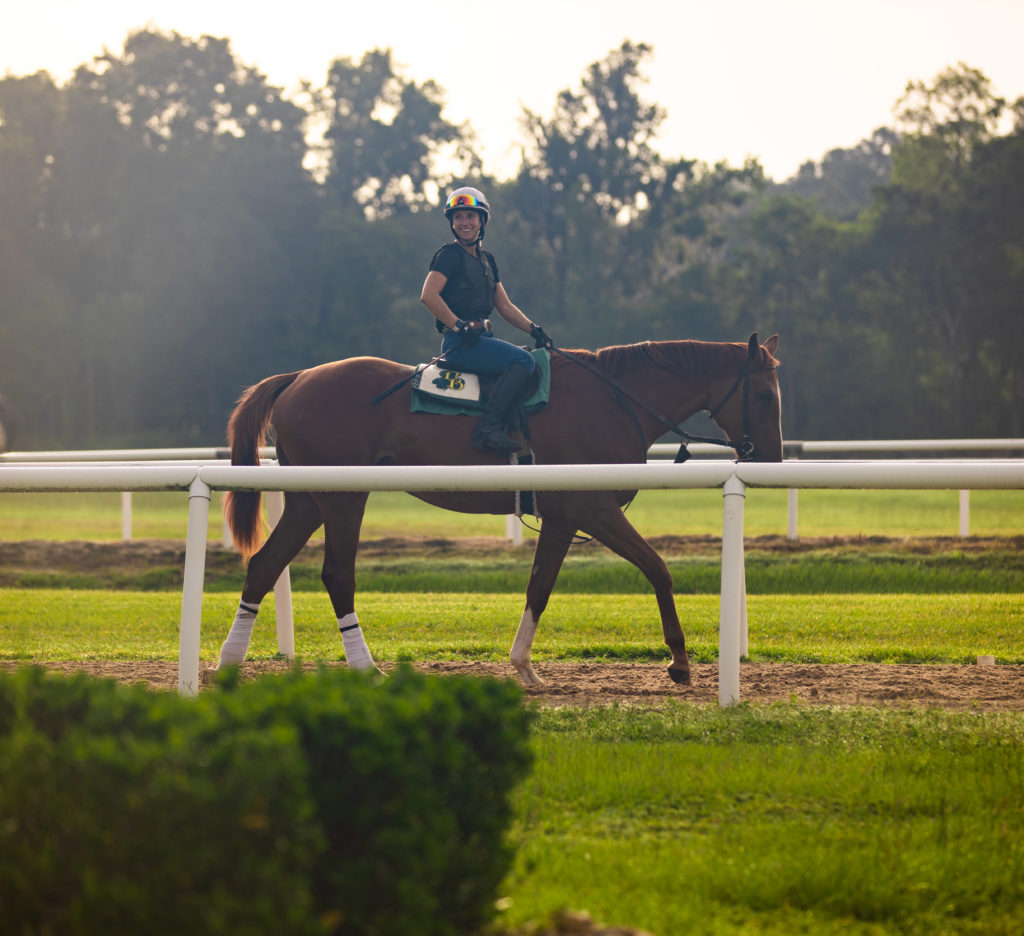 “The first day that we were transported to the farm, we came over the hill and I saw the farm and the horses for the first time,” Bandi remembers. “I was overwhelmed with emotion. It brought tears to my eyes and I felt hopeful.”

Bandi threw herself into the equine program, immersing herself in the farm from 7:30am-3:30pm, six days a week. The inmates feed and groom the 45 to 50 horses and learn basic equine care, including dental and farrier work, alongside professionals. They also do farm maintenance work, fixing fences and mowing. For those interested in riding, lessons are provided by Carol Fletcher, a well-known Ocala trainer. The inmates also help retrain the retired racehorses that can be adopted out.

“I had never been around thoroughbreds before and I fell in love with the farm’s horses,” Bandi declares. “Some of them come with racing injuries, so you help nurse them back to health under a veterinarian’s guidance. When we got OK Dude, he became my special project. Once he was healthy, Carol taught me how to teach him tricks. He became the farm’s ambassador at public functions. I’m very proud of OK Dude.”

At night, back in her work camp bunk bed, Bandi would cross off another calendar day of her sentence. Then she’d sleep fitfully, anxious for the morning and to be back on the farm.

“I loved learning everything I could with the horses and in the equine care technology course. And I loved being able to ride horses again,” says Bandi, who became one of the farm’s best riders and earned her ECT certification. “All of that made me feel like a human being again and gave me a purpose.”

As a model inmate, Bandi’s sentence was reduced from the original five-year sentence. On September 9, 2017, she was released after serving four years and two and a half months. 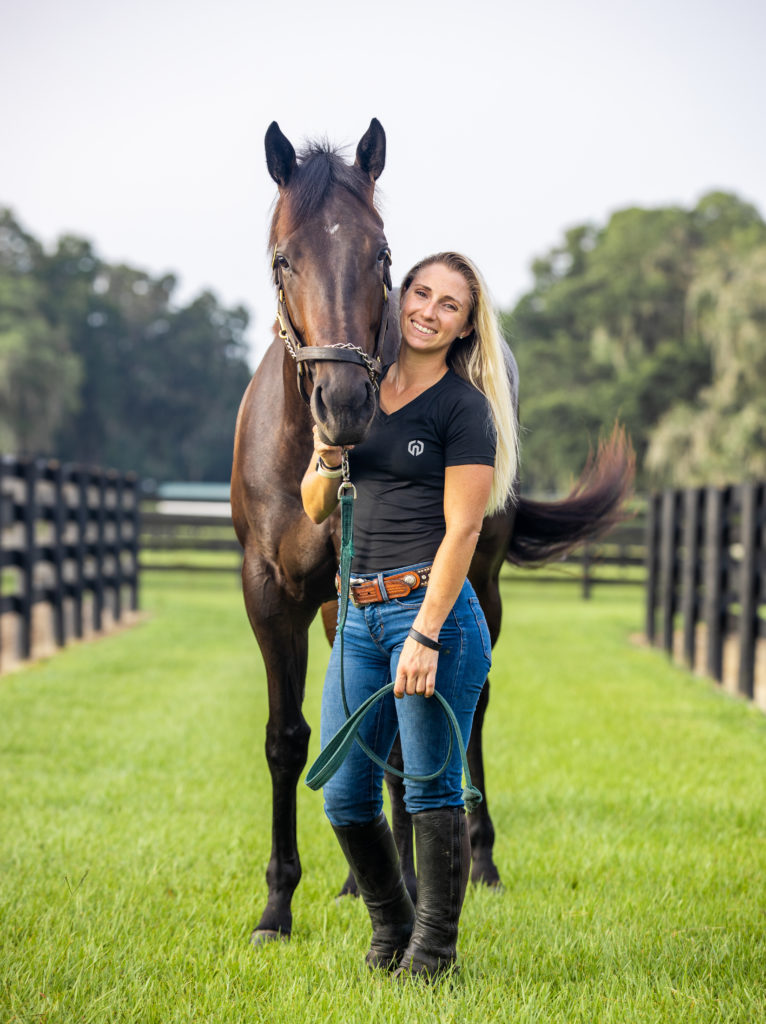 “It was just before Hurricane Irma struck and I was so afraid that I wasn’t going to be released,” she recalls. “But, thankfully, I was, and by that time, I knew I wanted to work in the thoroughbred industry in Ocala. Mr. Evans and Tammy Gantt, who’s with the Florida Thoroughbred Breeders’ and Owners’ Association, were both so encouraging and pointed me in the right direction.”

Less than a month after her release, Bandi began working for Niall Brennan Stables. The latter is one of the top training operations in the country and a perennial 2-year-olds in training leading consignor.

“I love galloping horses in the mornings, I maintain the operation’s website and I’ve really gotten into photography,” asserts Bandi, who will graduate from the College of Central Florida this December with a bachelor of applied science in business and organizational management, equine specialization degree. “I am so grateful for where I am right now in my life. So grateful for my family who stuck with me through it all. And I owe so much thanks to TRF, Mr. Evans, Tammy Gantt, the Brennans and everyone else who has helped me.”

“I never thought of her in terms of the past. She was very excited to have this opportunity,” offers Niall Brennan. “She has been humble, never negative. She definitely turned a negative into a positive.”

Going forward, Bandi sees plenty of options for her, including, perhaps, starting her own equine-related business. And she’s thinking of writing a book, already titled Happenstance, about her experiences

“I believe everything happens for a reason,” professes Bandi. “I got a second chance and I’m making the most of it.”

Founded in 1983, the Saratoga Springs, New York-based Thoroughbred Retirement Foundation’s primary mission is to save thoroughbred racehorses no longer able to compete from possible abuse, neglect and slaughter. TRF has 18 thoroughbred retirement facilities located across the country. Of those, seven are also Second Chances Farm programs at state correctional facilities. At those locations, inmates provide supervised hands-on care to the horses and also participate in an equine care technology program.

The TRF Second Chances Farm was established at the Ocala-based Lowell Correctional Institute (LCI) in 2001 in a joint effort by the TRF, the Florida Department of Corrections (FDOC) and the Florida Thoroughbred Breeders’ and Owners’ Association (FTBOA). LCI is the only all-female inmate correctional facility with the Second Chances program. The program is situated on 100 acres at state property that also includes the Marion Correctional Institute for male inmates, and the FDOC provides the land and labor at no cost. The FTBOA administers funding for the farm’s other expenses through its charitable arm, Florida Thoroughbred Charities.

“The FTBOA believes the care and support of retired thoroughbreds is a common sense responsibility shared by all who participate in the racing and breeding industry,” states Lonny Powell, FTBOA chief executive officer. “Through the Second Chances program, we have been fully committed to this mission for two decades and will continue to be so committed.”

Tammy Gantt, the associate vice president of membership services and events, concurs and says, “It’s a wonderful thing to help horses and people together to provide such positive benefit, from giving retired thoroughbreds lifelong homes to giving women self-worth while learning lifelong skills. And, according to FDOC statistics, the LCI Second Chances program has helped account for a 3 percent recidivism rate versus an average state 16 percent recidivism rate.”

The success of the LCI Second Chances program has not gone unnoticed by the TRF.

“In my role with the TRF, I have had the unique opportunity to visit many of our Second Chances programs across the country,” explains Kim Weir, TRF director of major gifts and planned giving. “While each reflects the special partnership we have with each one, the LCI program is truly special because it is the only women’s prison in our network. There is truly something extraordinary about the relationship between the women inmates and the horses.”

Weir also notes that “the TRF will be celebrating the 20th anniversary of the LCI Second Chances program in Ocala later this year and looks forward to sharing it with the community of Ocala.”

For more information about TRF, visit www.trfinc.org or contact Kim Weir by calling (518) 226-0028 or by emailing kim@thoroughbredretirement.org