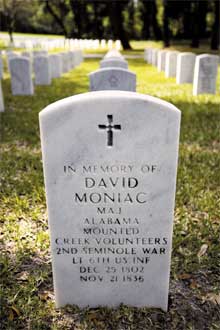 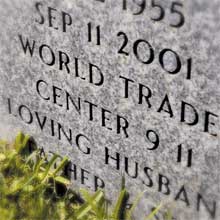 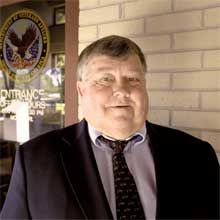 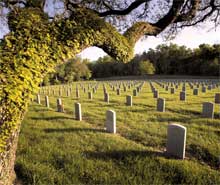 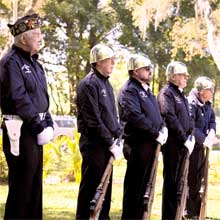 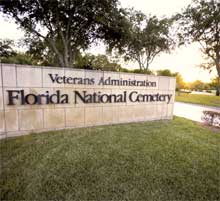 The simple elegance and peaceful tranquility of Florida National Cemetery in Bushnell is a fitting tribute to the more than 80,000 veterans and their spouses who are interred there.

The 512-acre cemetery rests on the southwestern fringes of the Withlacoochee State Forest, a site that was chosen in 1983 by the Veterans Administration for Florida’s fourth national cemetery. (A fifth national cemetery opened in April in Lake Worth.) The first interment was in 1988, and today the cemetery hosts about 32 funerals per day, Monday through Friday. To accommodate the area’s ever-growing population of veterans, Florida National Cemetery recently began a 112-acre expansion, which will include another columbarium for cremated remains.

“It’s prettier than Arlington,” says Robert “Bobby” Hodges who was one of the first employees when the cemetery opened in 1988 and today supervises cemetery operations. “The natural vegetation from the Withlacoochee State Forest provides a beautiful backdrop.”

Indeed, the surroundings are picturesque and serene for the thousands of visitors who come not only to visit gravesites but also for special observances such as the Avenue of Flags Ceremony on Memorial Day. Each year, more than 400 American flags are displayed along the roadways of the cemetery. Families donate the flags, which were once draped over caskets.

Visitors also find the Memorial Pathway to be an interesting walk that honors veterans from military conflicts that precede the 1988 opening of the cemetery.

For instance, Major David Moniac was the first Native American graduate of the U.S. Military Academy in West Point, N.Y. Ironically, the member of the Alabama Creek Nation was killed fighting against Seminoles in the Second Seminole War in 1836 at the Wahoo Swamp on the Withlacoochee River. Although his remains were buried in a mass grave in St. Augustine, the Creek Nation of Alabama placed a memorial marker in his honor at Florida National Cemetery.

“Every veteran is entitled to one identifiable marker,” explains Hodges, who is a Vietnam War veteran. “If they do not have an identified gravesite somewhere, they can have a memorial marker at a national cemetery.”

While it’s common to think that most veterans who are laid to rest in national cemeteries are victims of military conflicts, the opposite is actually true. Most live out their natural lives and choose to be buried in a place reserved for veterans and their spouses. In many cases, spouses precede them in death and can be buried in the national cemetery first. A few active-duty servicemen killed in the Iraq War have been buried at the Bushnell cemetery in recent years, however.

The picturesque location offers the public a chance to enjoy a peaceful setting where they can quietly honor those who have served the nation. A Visitors Center makes it easy to find specific gravesites with a computerized locator that prints maps of the cemetery. And the best part of Florida National Cemetery may be the long-time employees who take pride in the appearance of the grounds and who handle grieving families with compassion. Many of them, like Hodges, have worked there since it opened.

“We realize what this cemetery stands for,” Hodges says. “They [veterans] gave something to our country and we’re trying to give something back.”

A History of Memorial Day

Originally called Decoration Day because women’s groups in the South decorated graves before the end of the Civil War, Memorial Day is a day of remembrance for those who have died serving our nation.

General John Logan, national commander of the Grand Army of the Republic, officially proclaimed Memorial Day on May 5, 1868. Flowers were placed on the graves of both Union and Confederate soldiers at Arlington National Cemetery. All the northern states recognized the official holiday by 1890, but the South refused to acknowledge the day until after World War I when the holiday changed to honor all Americans who died fighting in any war, not just the Civil War. Today, Memorial Day is celebrated in almost every state on the last Monday in May.

In 1918 Moina Michael, a University of Georgia instructor who took a leave of absence to join the Overseas YMCA War Workers, conceived the idea of wearing red poppies on Memorial Day. She was inspired by the poem, “In Flanders Fields,” by Col. John McCrae. She was the first to wear one, and sold poppies to her friends and co-workers with the money used to benefit servicemen in need. Since 1922, the Veterans of Foreign Wars “Buddy Poppy” program has raised millions of dollars in support of veterans’ welfare.

Editor’s Note: A Memorial Day ceremony will be held at Florida National Cemetery beginning at 10am on Monday, May 28.